This rusted locomotive once took tourists on a 62-mile journey through East Tennessee. Now, it sits at the end of its line tucked away in the hills it used to tour. 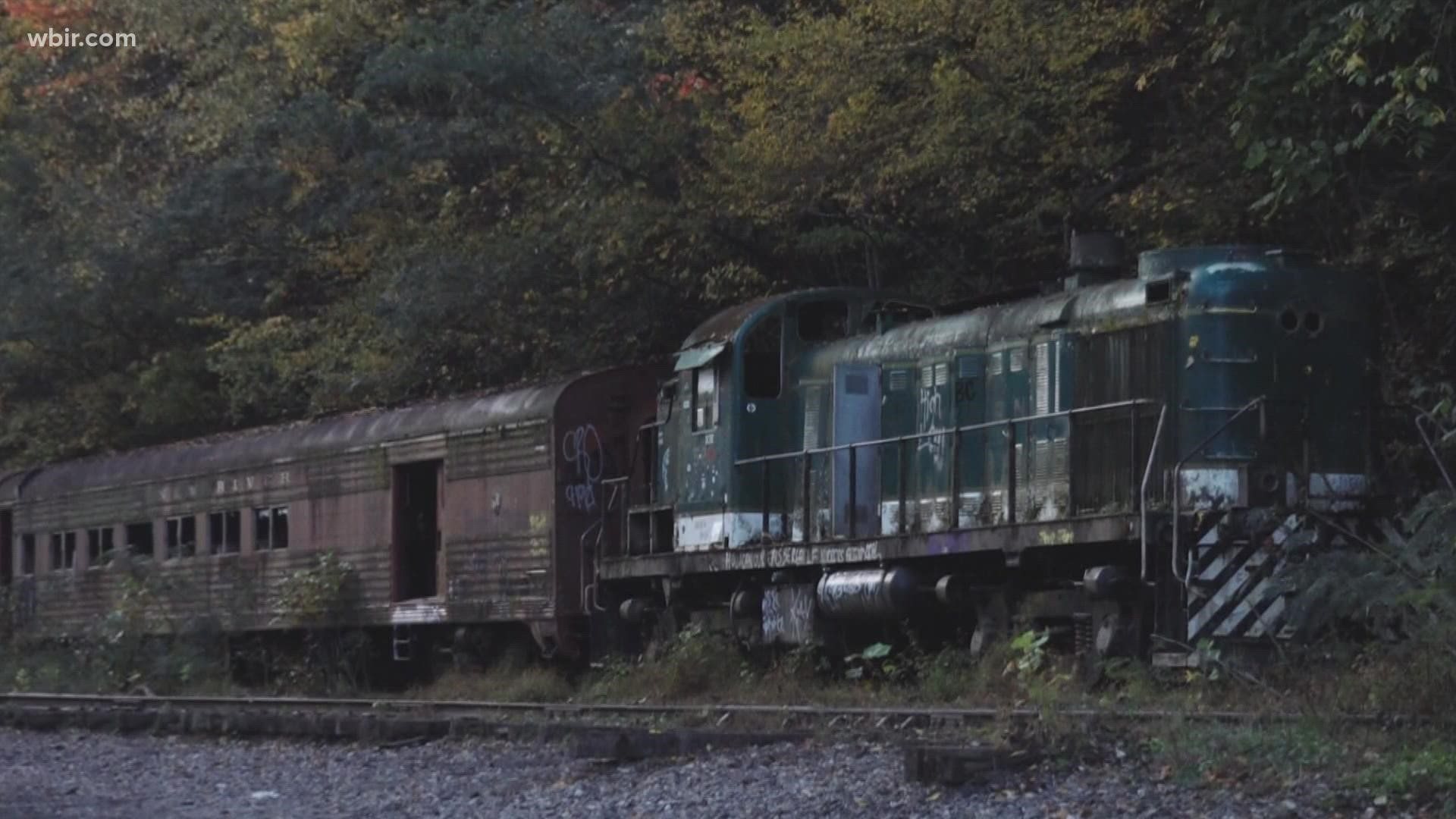 ANDERSON COUNTY, Tenn. — Hidden away among the trees in Anderson County are the remnants of a short-lived, but once beloved, tourist attraction.

The New River Scenic Railway was an idea brought to life by two East Tennesseans who wanted to start a tourism business.

They struck a deal with the coal company to use the railway for the operation. Then they bought the locomotive from a mine in Arizona and added a passenger car with a converted baggage car for a gift shop and snacks.

Passengers would wind along a scenic 62-mile trip deep into East Tennessee, and the little local operation’s popularity grew rapidly with its brochures scattered throughout the community.

Shortly after it started running, the owners had to add a second passenger car from Canada, complete with safety notices in French and English, so they wouldn’t have to turn guests away.

While self-proclaimed train enthusiast John-David Ezell never got to take a ride while it was running, he has learned quite a bit about the locomotive’s history through a friendship with the owners.

“It was a pretty popular trip. It didn't last very long, but everybody wanted to come do it,” he said.

The short-lived stint lasted from 2008 to 2010 before things began to derail when the line changed hands and disputes about the rights to use the track brought the excursion to a screeching halt.

“They parked it here to keep it out of the way in case they ever needed to use the line for anything else, and here it's sat for going on probably 11 or 12 years now,” Ezell said.

1 / 15
Elizabeth Sims
This rusted-out locomotive once took tourists on a 62-mile journey over a river and through the hills of East Tennessee.

For a time, the owners and interested community members tried to keep the train in tiptop shape.

Wind, rain and sunlight brought on layers of moss and rust outside and decay on the inside.

"A lot of the degrading is because of the windows being out. When they restored this car, all this upholstery and everything was brand new, and when the windows were still in, we kept the sunshades down or tried to because you can see where it got bleached sitting in the sun for so long,” Ezell said.

RELATED: Know of an abandoned place? Suggest a location for us to explore

People have also worn away at the little train. Thieves have picked apart the once beautiful green vintage diesel engine while vandals have left their own personalized messages throughout the conductor’s room and passenger cars.

“I'm kind of having a little giggle right now because that wasn't gone the last time I was up here not very long ago,” he said. "All kinds of interesting graffiti like some behind me that probably shouldn't be on TV."

Ezell said the owners are fine with visitors stopping by to take pictures, especially since it is a popular destination for ATVs coming from Wind Rock.

While the locomotive has lost its luster, a walk through the narrow and dully colorful aisles of the passenger cars gives subtle glimpses at the magic passengers felt aboard as the train chugged through the hills and over the New River of East Tennessee.

Advocates, like Ezell and the members of the Save The Tennessee Railway Facebook page, have pushed for a new life for the little tourist train.

At one point, the owners wanted to move it to another property they own as a stationary tourist attraction.

However, a one-way ticket out of the woods would come with a high price and difficult terrain.

“There's a couple of washouts on the railroad line so getting anything out of here or in here by rail would be a real challenge,” Ezell said. “Not only is it overgrown, in a couple places the track’s dangling over the river. So it's a long shot, but there are possibilities. I mean, stranger things have happened."

For now, Ezell said to visit with respect, hoping an ambitious vision might get the train back on the right track.

“It’d be nice to see anything happen with it really, whether it be restoration, static display,” Ezell said. “We could fix it back up a little bit, make it a little nicer for people to come see. Maybe it would lose the nickname as the abandoned train."

Reporter’s note: Though many of the buildings featured in this series are unused and empty, they sit on private property that is still actively used in some cases. DO NOT attempt to unlawfully enter any of these places without permission. Many of them are structurally unsound and pose potential health hazards, like asbestos and lead paint. WBIR contacted all owners prior to visiting.

For more stories from East Tennessee's Abandoned Places, check out our YouTube playlist: