Andrew Lumish has restored more than 3,000 headstones in cemeteries in central Florida. He's also inspired others around the world to do it in their neighborhoods. 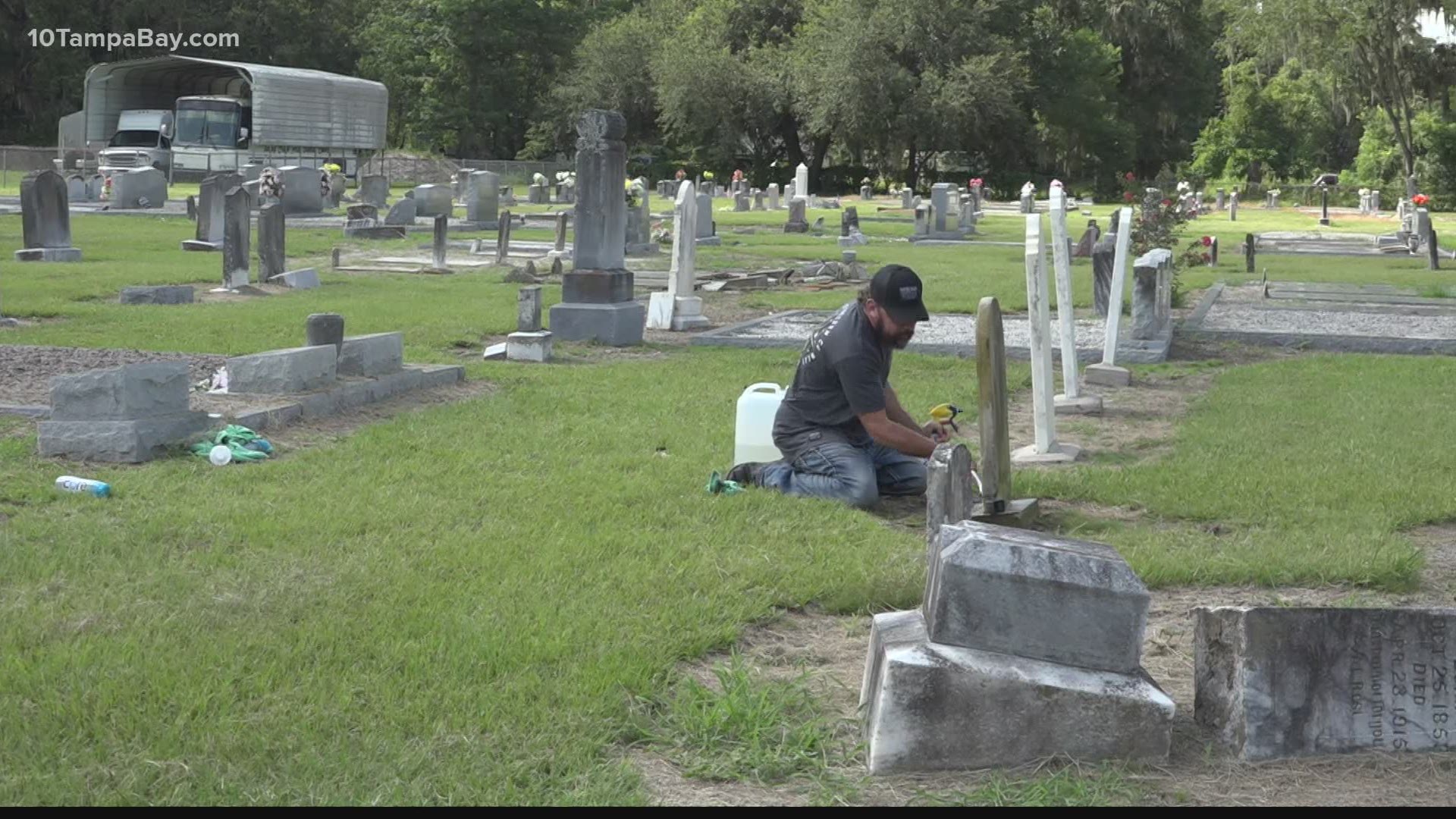 PLANT CITY, Fla. — Norman Root made the long drive to Murphysboro, Tennessee, from his home in Michigan two years ago. He was bounded for Stones River National Cemetery to hear a man from Florida speak.

Andrew Lumish stood in front of the crowd and shared his mission.

Root knew instantly he had to join.

“I’m amazed at what Andrew does. I’m just flat out amazed,” said the retiree.

Since 2013, Lumish has restored headstones in cemeteries that have been worn down by time. He sprays a specific solution on the stones and scrubs them with multiple brushes. Some stones require just two months of elbow grease. Others, up to a year.

“This is what I was meant to do,” he said from a small cemetery behind a Plant City church. “The feeling of accomplishment that you have it’s really difficult to describe.”

Root, a Marine from 1970 to 1973, is involved in many community projects. He and his fellow veterans do various outreach events throughout the year. When Root pitched the idea to his group of cleaning headstones like Lumish, it was an instant hit.

“You spray it, come back in a couple weeks or a month and you work on it again. Spray it again,” he said. “I guess the joy is being able sometimes to read what’s on them.”

Lumish has inspired people around the globe to restore grave markers by building an online platform. His nickname is ‘The Good Cemeterian’ and his website shares stories and photos of his restorations in central Florida cemeteries. He carefully researches each stone and the person for whose grave it marks. Often it is a marker from well over a century ago. Many times, families' stones get restored all at once.

“It sparks a fuel in you. If you run across Andrew’s story, how could it not?” said Sharee Lane, who has begun restoring stones near her home outside Atlanta. “When I go out, I’m looking for something illegible. Something that almost looks forgotten about.”

Lane’s little sister just joined the Army. Lumish originally began cleaning headstones to honor those who served in the military.

“For military people, it’s all about the people who have gone before us. The people whose shoulders we stand upon,” Root said.

His Instagram page is full of before-and-after photos showing the impact of Lumish’s work. Headstones that were once nearly unreadable come back to life with a little elbow grease and hours of careful scrubbing.

Each headstone, he says, tells a story.

“This person was once above ground. There is no difference why you shouldn’t show the same respect to them now that they’re not,” Lane said.

Having inspired others to carry on what he started, Lumish started a non-profit to raise money for supplies, which he then ships out to jumpstart more cleaning groups. He routinely hears from people around the USA and even abroad who have started restoration projects because of him.

“Certainly, this has galvanized us,” Root said of his group of ex-Marine buddies who now gather to clean stones together. “We are all on the downhill side (of life) and you want to make sure people remember you.”

Check out some of Lumish’s work on his website.