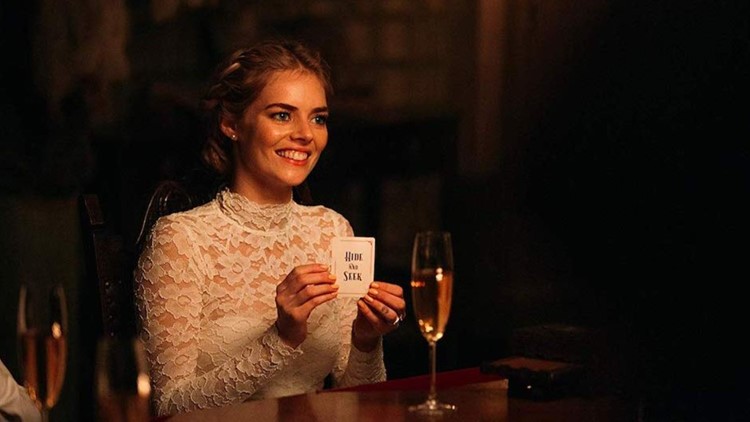 ST. LOUIS — Grace (Samara Weaving) simply wants to marry the man of her dreams, Alex (Mark O'Brien, City on a Hill). There's just one problem: she has to go through his family first... literally.

The secret sauce in Matt Bettanelli-Olpin and Tyler Gillett's new film, Ready or Not, is the sense of humor that gets attached to an absurd premise. If you like over-the-top action with dark comedy undercutting the action, this is the film for you this summer.

When Grace is warned by Alex's brother, Daniel (Adam Brody), before the wedding, she laughs it off as the usual in-law memo. What she doesn't know about the Le Domas family is that they like to play a game with the new member of the party. A game entrenched in ancient history, equal parts voodoo and devil-type worship nonsense.

A survival of the fittest is on the dinner table here, so check yourself before entering the theater. A scream bag or armchair vice would be wise. The game of chance is a unique one and consistently fertile ground for fine entertainment at the movies, but Guy Busick and Ryan Murphy's script really leans into it.

This is a movie where you don't need to watch the trailer, because it gives too much away and spoils the true horror of the way Ready or Not plays out. You should enter as blindly optimistic as Grace, thinking this will be just another scary-ish whodunit thriller and not a wildly ingenious idea that the filmmakers pull off.

While film veterans such as MacDowell and Henry Czerny anchor the back end of the cast, it is Weaving who makes this film truly sing. I had only see her in a Showtime series called 'SMILF,' but this is a role where she gets to tap into so many emotions and mindsets. There's happy wedding glee, small discomfort, straight up terror, and then a "that's enough" mode to finish it off. You'll roll with the punches just as she does, making the film a real ride. Consider this the actress' coming out party.

Brody is a real delight as the aloof brother who seems experiences a tug of war between supporting his family and helping out Grace.

There's a scary old lady who haunts the film as well as the annoying family members who don't really want to play the game, yet do so anyway. This film does have some common genre threads attached to the main plot, but they don't drag down the swift 95 minute running that moves quick.

There are surprises near the end, including a heartbreaking yet honest twist that was very well-played. You'll be talking during this film, especially at the screen. "Don't do that" will be a frequent shout during this film.

RELATED: Review | 'David Crosby: Remember My Name' is a heartfelt and brutally honest depiction of the musician's life

RELATED: Review | Why Amazon's 'The Boys' is a must-watch television show

The best part is you will be laughing throughout the thrills. 'Ready or Not' would have failed miserably if it took itself too seriously, which would just wear the viewer down and depress them at the same time. "Families really do this!" would fill the theaters.

Thankfully, the film is self-aware and gives out tongue-in-cheek candy like it's Halloween. The humor is spread throughout the film, and it's not stupid frat jokes. You are laughing at the absurdity of it along with a few of the characters. A rich family hunting the new girl in town with bows, arrows, old guns, and a rather sinister butler.

It's all part of the game, and this is a good one. Think 'Get Out' meets 'The Purge,' with a dessert round of an underrated 2011 film called You're Next.

I guarantee you will leave this film laughing, partially freaked out, and having second thoughts about how you tell the folks about the upcoming nuptials. Most importantly, you'll have fun. Movies like this are designed to take your mind off important adulting matters, and not make you think too much.

Thanks to a game cast, especially Weaving, and a witty script, 'Ready or Not' is good way to stay out of the heat yet remain entertained.