“If you’re not a cat person, this will probably convert you.” 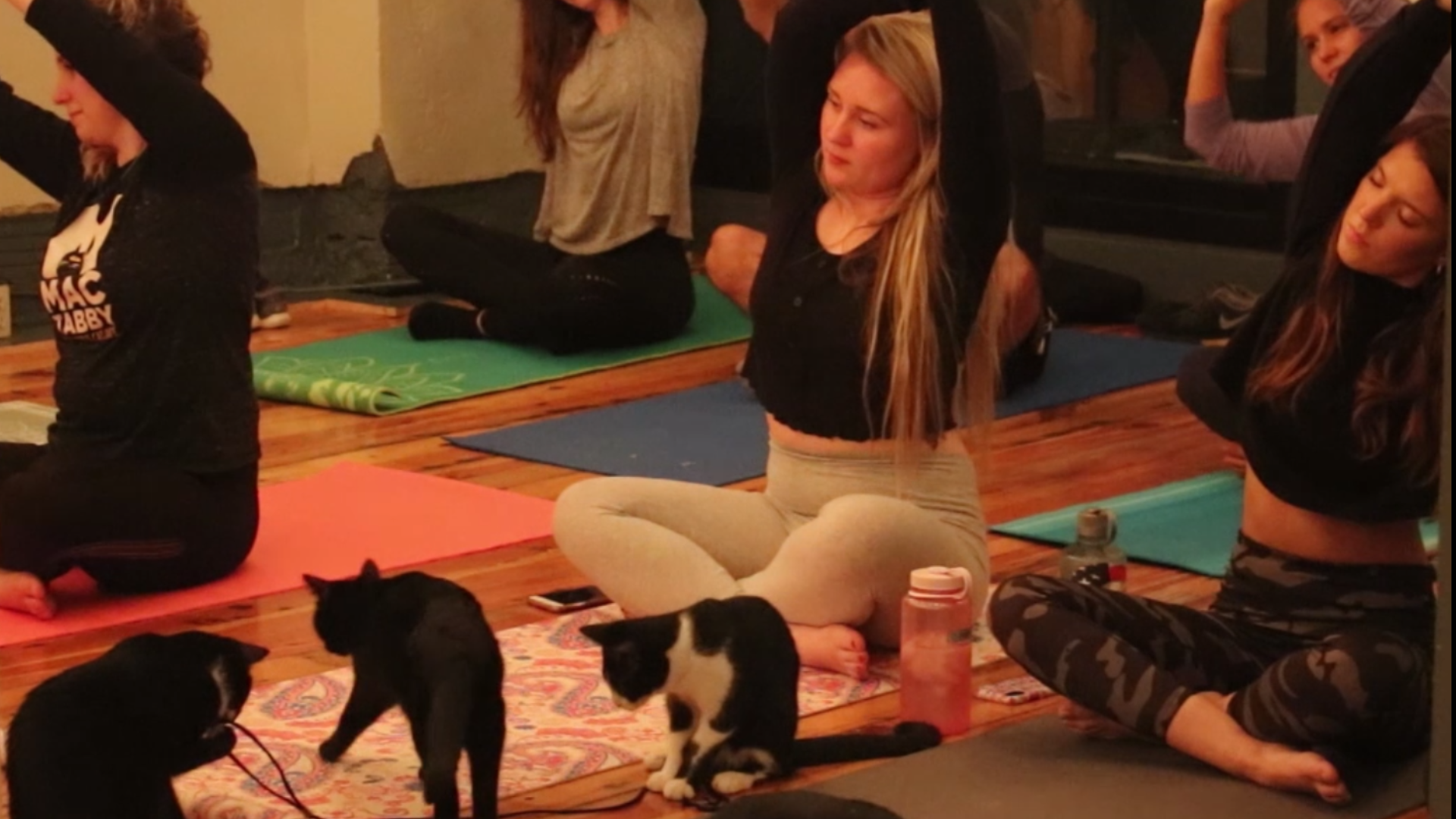 CHARLOTTE, N.C. — A full room of yogis sit quietly on their mats, focusing on their breath and meditating before a yoga class. Then, out of the silence, one kitten pounces on another. The moment is broken by laughter. This is cat yoga.

“My favorite thing is probably the laughter,” yoga instructor Eva Mathieu said. “Teaching other yoga classes without cats in it can be sometimes people come in with an expectation that maybe you have to be flexible or you have to be good at yoga or maybe there’s gonna be judgments or something like that. Being here, the wall is already broken.”

Mathieu has worked at Charlotte’s Mac Tabby Cat Café in NoDa since February. She’s been doing yoga for years and teaching for two, so about a month after joining the cat café team, she started teaching the cat yoga class.

“It makes my job easier to teach and let people have a fun time and fun experience when they’re already in a good mood,” Mathieu said.

Every Monday, cat lovers and newcomers gather to stretch, relax and play with cats. Mathieu described the class as a good beginner class, making it accessible for anyone to join in.

“I like to keep it simple and very relaxed and focused on the cats and a little bit more … connecting with yourself and your soul and the cats as well,” Mathieu said.

The way they kick off the class sure helps -- Mathieu goes around and sprinkles a little bit of catnip on each mat.

“The biggest tip I could give you is bring a mat that you don’t mind getting a couple little claw marks in,” Mathieu said.

She said the cats don’t usually need the extra boost, but it makes it even more fun. Every meditation without fail, Mathieu said, the cats will act up. She said one time a cat ran out and jumped on her head just after she told everyone to inhale.

Participants at cat yoga are sure to be entertained. All of the cats at the cat café are available for adoption, so if a yogi falls in love with the cat on their mat, they are able to apply through a Charlotte foster network.

“If you’re not a cat person, this will probably convert you,” Mathieu said.

Mathieu recommends anyone interested in attending a class sign up ahead of time, as they have filled up before, and doors lock promptly at 7:30 p.m. each Monday.

Despite how energetic the cats are at the beginning of the class, they tend to tucker themselves out by the end of the class. After playing nonstop, most of the cats are lying down on the floor or on yoga mats as the hour wraps up.

“It’s just a really good place to get to know cats and their personality,” Mathieu said.

To close out the class and transition to 30 minutes of “cat time,” Mac Tabby tradition is to gather for a loud ‘om’ in unison -- one that always wakes the cats and alerts them it’s time to play again.

Then just as they were before the class, all the cats scurry around, ready for someone to play with and pet them. Mathieu encouraged people to come see the cats and try their hand at yoga, especially if it’s their first time.

“We will welcome you with open arms and open paws,” Mathieu said.