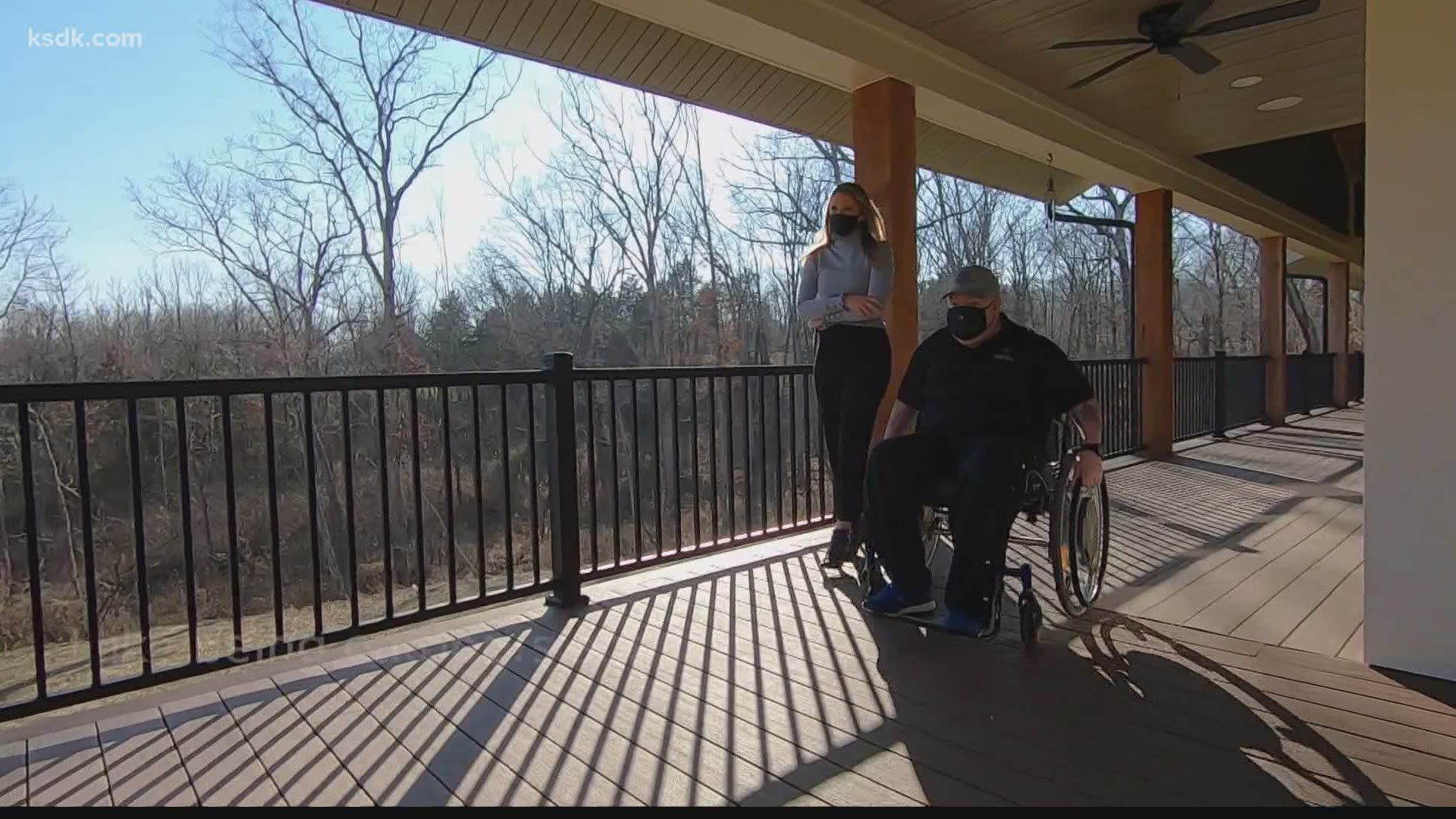 ST. CHARLES COUNTY, Mo. — On April 9, 2010, Officer Mathew Crosby kissed his wife and their two sons goodbye and walked out of their house for the last time.

Hours later, he was shot and paralyzed while responding to a domestic disturbance at a Rock Hill apartment complex.

He hasn’t come back to a home of his own ever since.

But he's been dreaming of what it would be like ever since he got shot.

Social workers, insurance representatives and physical therapists would ask him about where he would be living once he got released from the hospital to begin his new life as a paraplegic.

They discussed making some temporary changes to the home he left that fateful day to suit his new special needs – but he was dreaming much bigger.

He wanted to build a house.

It would be somewhere in the country so he could hunt and fish with his sons, then 7 and 8 years old.

It would be big enough for each of them to have their own rooms.

And it would have a bathroom, hallways and doorways big enough for his wheelchair.

But he never dreamed it would take this long.

That there would be no returning to the home he shared with his wife and kids as it got built.

Or that it almost wouldn’t happen at all.

“It’s just mind blowing,” Crosby said, his voice carrying a slight echo inside the new spacious great room of the house he moved into in December. “You really just want to pinch yourself and say, ‘Is this really mine?’"

“Some days I wake up and it’s still hard to believe.”

Crosby and his wife separated during the four months he spent in the hospital and rehabilitation center following his shooting.

So, a family friend let him move into a two-bedroom condo in the New Towne subdivision in St. Charles County. He was surrounded by furniture and fixtures he didn't own and pictures of a family who wasn't his.

He lived there for about a year before finding a three-bedroom home for rent in St. Louis County. His sons slept in bunk beds anytime they came for a visit. And the third bedroom was where his parents stayed during overnight visits.

In 2016, two more officers suffered catastrophic injuries in the line of duty.

First, Ballwin Officer Mike Flamion was shot during a routine traffic stop, leaving him a quadriplegic and dependent on a ventilator.

About a month after that, a car struck Hazelwood Officer Craig Tudor as he was responding to a call. He was paralyzed from the chest down.

The St. Louis Post-Dispatch sent me to Craig Hospital in Colorado to write about the two officers as they rehabbed together at the premiere facility. As part of that project, I revisited Crosby and Florissant Officer Michael Vernon, who had, by that time, years of experience living with catastrophic injuries.

Vernon and his wife had relocated to Tennessee and built a fully accessible home.

Crosby was still living in the rental home.

He had been lying in his king-sized bed for about eight months covered by nothing but a sheet as he tried to recover from a pressure wound.

He told me he got the wound because his nursing company didn’t send caregivers at night to help him get into bed, so he would sleep in his wheelchair.

It’s a common injury among paralysis patients – one that can be deadly should it get infected and cause sepsis.

At one point, sepsis did set in. Crosby’s kidneys started to fail. And he went into a coma. Before it was over, he had to have four surgeries.

His bed was about as big as his room, leaving very little space for his sons and his parents to surround him or even his caretakers to maneuver him.

He admitted he wasn’t taking care of himself.

After the story ran, an army of volunteers formed.

They called themselves The Crosby Crew.

Their mission was to raise enough money to get Crosby a home of his own.

His parents set up a trust fund to funnel all of the donations.

They planned trivia nights, auctions and dine out events in which more than 60 restaurants raised money for the cause.

“When I was at one of the lowest points in my life, they picked me up and just changed my whole outlook on life,” he said.

Credit: KSDK
Mathew Crosby and his crew break ground on his home

He soon had a 13-acre property in St. Charles County as well as the foundation for a five-bedroom home – big enough for his sons to have their own rooms along with his parents and his 24/7 caregiver.

The Srote & Co. Architects – once known as the Schaub & Srote firm that designed landmarks like the Moonrise Hotel in the Delmar Loop – designed the home Crosby dreamed about since those early conversations he had in the hospital.

“We were ready to start framing and the people who agreed to originally do the framing backed out, so it just sat there for like two years,” Crosby said.

He said he could feel himself slipping into depression once more.

But he tried to keep the faith.

“I don’t think He would have started all that and brought all those people from the community together for no reason,” Crosby said. “I knew that He would see it through on His time not my time.”

As progress on his project slowed, Crosby watched his fellow paralyzed officers in the St. Louis area benefit from The Gary Sinise Foundation.

The actor’s nonprofit builds and modifies homes for paralyzed veterans and police officers.

In August 2019, Crosby applied to the foundation’s Restoring Independence Supporting Empowerment program after a board member saw the 2016 Post-Dispatch article and learned the project had stalled, said Elizabeth Fields, the nonprofit’s chief operations officer.

On average, the nonprofit gets about 30 local contractors to donate time, labor and materials to every project it does across the country, she said.

“That’s just incredible,” Fields said. “I would say that’s definitely the most special out of any R.I.S.E. home that we’ve ever dedicated.

“He's done tremendous things for the local communities, and sacrificed so much, it was just our greatest pleasure to be able to provide him that 100% mortgage-free specially-adapted smart home.”

Nationally, the nonprofit has built 68 homes, with 16 currently under construction.

In Crosby’s case, the community gave the organization “a nice jumpstart,” Fields said.

Crosby moved in just before Christmas – about 14 months after the organization revived the project.

Typically, the nonprofit plans a large dedication ceremony to mark the move-in moment. But the pandemic hindered the great unveiling.

So, a series of video messages from friends, family and members of The Crosby Crew played on his new large-screen TV the day he moved in.

Gary Sinise opened the 15-minute video with about a two-minute message.

“Mathew Crosby, welcome home,” he said. “Just wanted to say what an honor it is and a privilege to be able to work with you on this home.

“It’s a long time coming. I know your injury was quite a while ago. You’ve been through ups and downs, ins and outs, but we were able to find our way to you to help you through this time and provide this house to you with the support of thousands and thousands of our citizens who support the Gary Sinise Foundation and lots of local support surrounding you with love and care because of what you’ve been through. People don’t forget.”

Flamion and his wife, Sarah, also recorded a message.

“Hey Matt, Sarah and I just wanted to congratulate you on your new forever home, welcome to the Sinise family and enjoy your beautiful home,” he said.

Watch more messages for Crosby in the video player below:

Symbolism of Matt’s journey is around almost every corner and every hallway of the house.

Crosby crew volunteers collected inspirational messages to write on the support beams inside the walls.

Pictures of his time in uniform line the shelves in his living room.

Aside from the décor, tools and specially adapted features give Crosby more independence.

A track on the ceiling inside his bedroom can attach to a seat that carries him into his bathroom and can put him in his bathtub.

He can wheel himself in and out of the shower.

The lights to his closet turn on anytime he crosses the threshold.

Everything – from his clothes to his cabinets – is within his reach.

He can control the temperature inside his house – keeping his room much warmer than the others, as his injury hinders his body’s ability to regulate its own temperature.

“It’s nice to do a lot more for myself,” he said. “Something as simple using the microwave or being able to get a drink for myself out of the refrigerator, I can do now.

“I’m equally grateful for everything that anybody ever did to help me. I can’t thank them enough. They changed my life.”

But it’s the outside Crosby says he loves the most.

Credit: KSDK
Mathew Crosby on the deck of his new home

A deck wraps around the home, overlooking what will soon be a zero-entry pool a local pool company has agreed to install so Crosby can do water therapy. Not far from that, Crosby said he hopes to have a fishing pond built.

His parents have a bedroom. So do his caregivers. And so do each of his sons, now 17 and 18.

He’s already gone hunting on the property with his boys.

All of his doorways, rooms and hallways are wide enough for his wheelchair.

Editor's note: An earlier version of this story contained in incorrect spelling of Elizabeth Field's name.