Ella Adams was born without a left hand. That hasn't stopped her from becoming one of the best basketball players at St. Ignace High School. 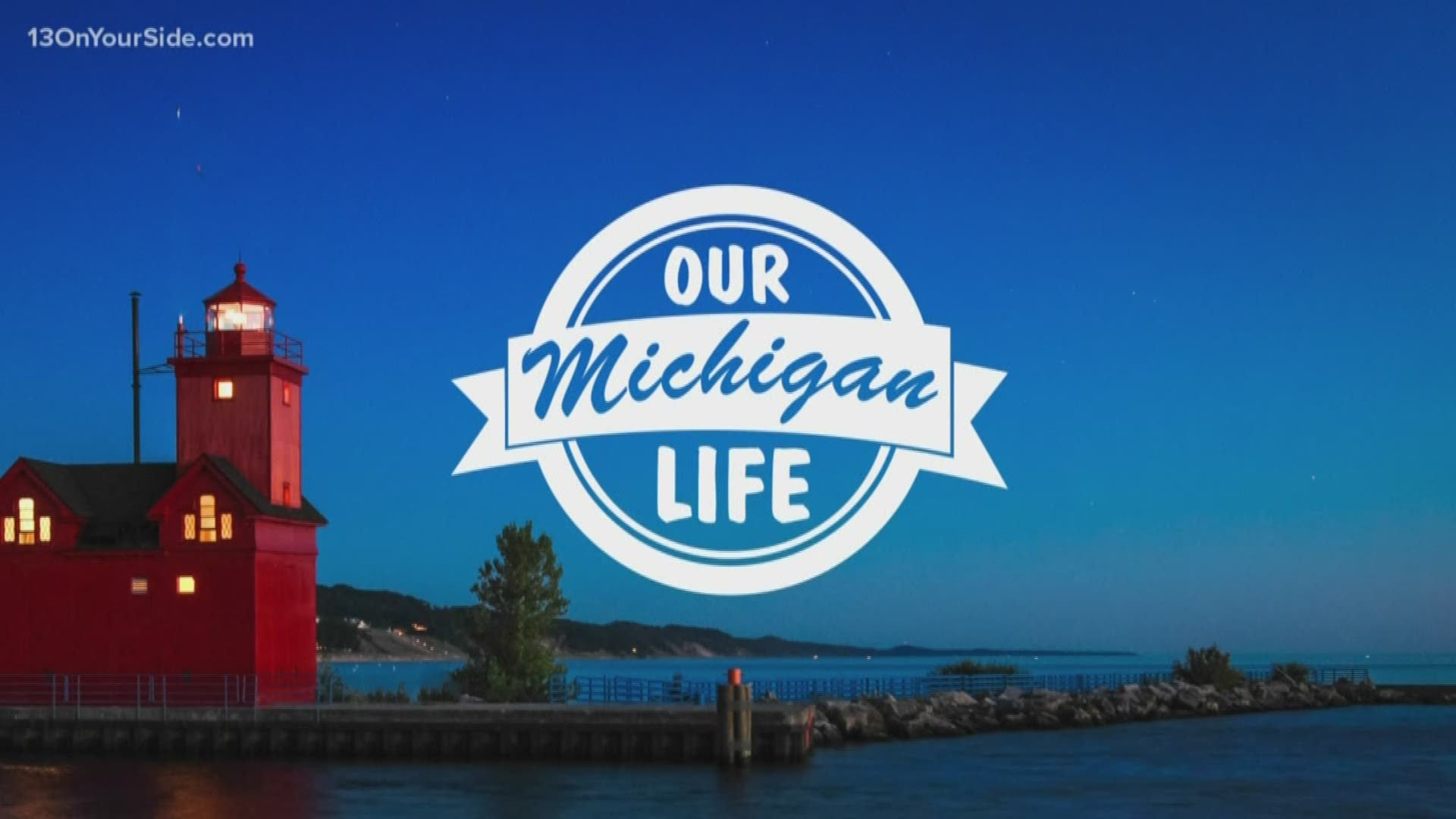 ST. IGNACE, Mich. — The madness of March is upon us.

High school basketball teams from all across the state of Michigan have begun what's affectionately known as 'one-and-done' time, as they try to survive and advance to play for a state championship.

The girls team from St. Ignace knows all about winning titles, having played in nine championship games, winning five of them.

This year's Saints team is positioned to make another deep March run, with the help from sophomore Ella Adams - a feisty player elevated from the junior varsity team, where she averaged 14 points, 7 rebounds, 6.2 steals and 4 assists per game.

Her most impressive stat can't be found in the box score.

Ella does it all with just one hand.

"I had to learn how to do things differently," said Ella, 15, who was born without a left hand. "I don't want to say I have a disability because just about anything [my teammates] can do, I can do."

That's a perfect mindset to have, considering Ella was seemingly born imperfect.

"When she was born, I thought it was a dream," said Rachel Adams, Ella's mother. "I was just devastated and couldn't stop crying for days."

Credit: Rachel Adams
Ella Adams never wanted to show in photos that she didn't have a left hand. She'd hide it all the time.

Ella was born with a rare condition called Amniotic Band Syndrome, which is caused by strands of the amniotic sac that separate and entangle digits, limbs, or other parts of the fetus.

"I'm new at this; do fingers, like, pop out," said Robert Adams, Ella's dad, moments after she was born. "Her little thumb was formed, but that was it. It was a learning process from the beginning."

Ella says she recalls realizing that she wasn't like the rest of her friends when she entered first grade.

Credit: Rachel Adams
Ella Adams was 'terribly self conscious' of her missing left hand during her formative years. She'd hid it every chance she'd get.

"I just remember going home really confused," Ella said. "Some of the kids at school would give me a hard time and I would cry a lot."

"She wouldn't let people take pictures of it," said Rachel. "She would hide it all the time, up until about the 7th grade."

Credit: Rachel Adams
As Ella got older, she became less self conscious about the missing hand, so much so, she'd pose for humorous photos, like this one.

That was around the time Ella found basketball.

"She's self-taught pretty much everything," Rachel said. "Ella's also learned a lot from her coaches at NubAbility Camp, which she attended for a couple years."

When Ella entered 9th grade, she wanted to try out for the St. Ignace junior varsity (JV) team.

"I remember asking who was left-handed," said Garth Law, who is the Saints' JV coach. "[Ella] instantly raised her arm and that was the hand she doesn't have.

Ella refused to let the fact that she was missing a hand prevent her from out-working and out-hustling everybody else on the team.

"Working at it for so long, it made me realize that I really don't need my left hand to actually play," said Ella. "I just learned to do it all."

Ella's abilities on the court stunned her coach.

"You can't overplay her because she turned her... if you want to call it a weakness, into a strength," said Garth. "How she operates changes the thinking of normal basketball that everybody else is used to.

"She works harder that anybody I've ever coached." 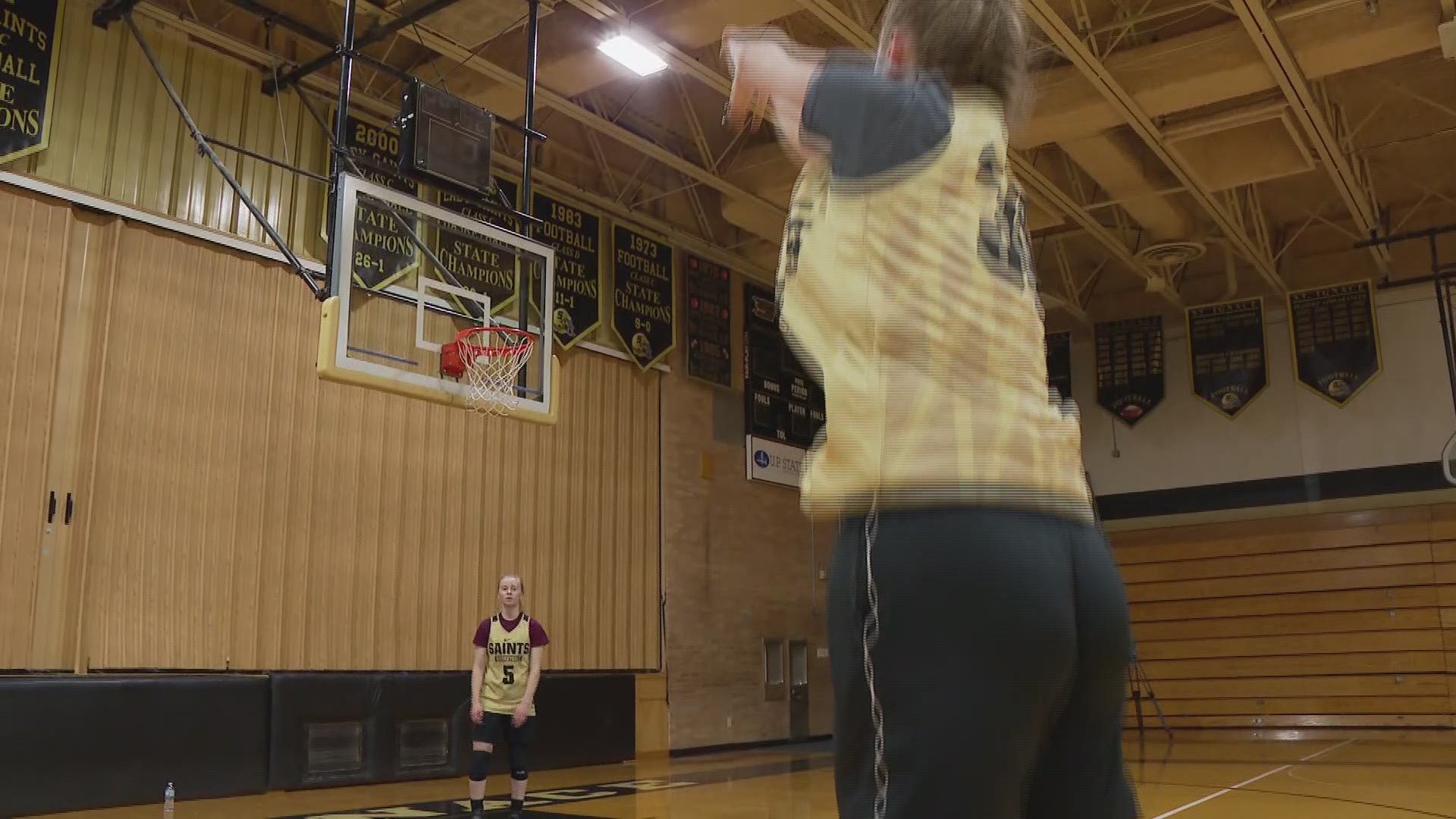 When her sophomore season started, Ella had developed a crossover dribble, which nobody expected.

"Whether it's stubborn, or grit, or heart, or whatever it is, she just figures out how to do what we want done, and she does it her way," said Garth. "It's always acceptable because she always works so hard and it gets done and the ball goes in the basket."

Ella has developed her game to the point very few notice she doesn't have a left hand.

"I have people come up to me all the time and say, 'You know what; that girl hustles, and it took me until the third quarter to realize she didn't even have a second hand,'" added Garth. "Or, when opposing players go to high-five her after the game and realize, 'Oh my gosh!'"

Her success on the JV team caught the eye of Dorene Ingalls, who is the head coach of St. Ignace's varsity girls team. 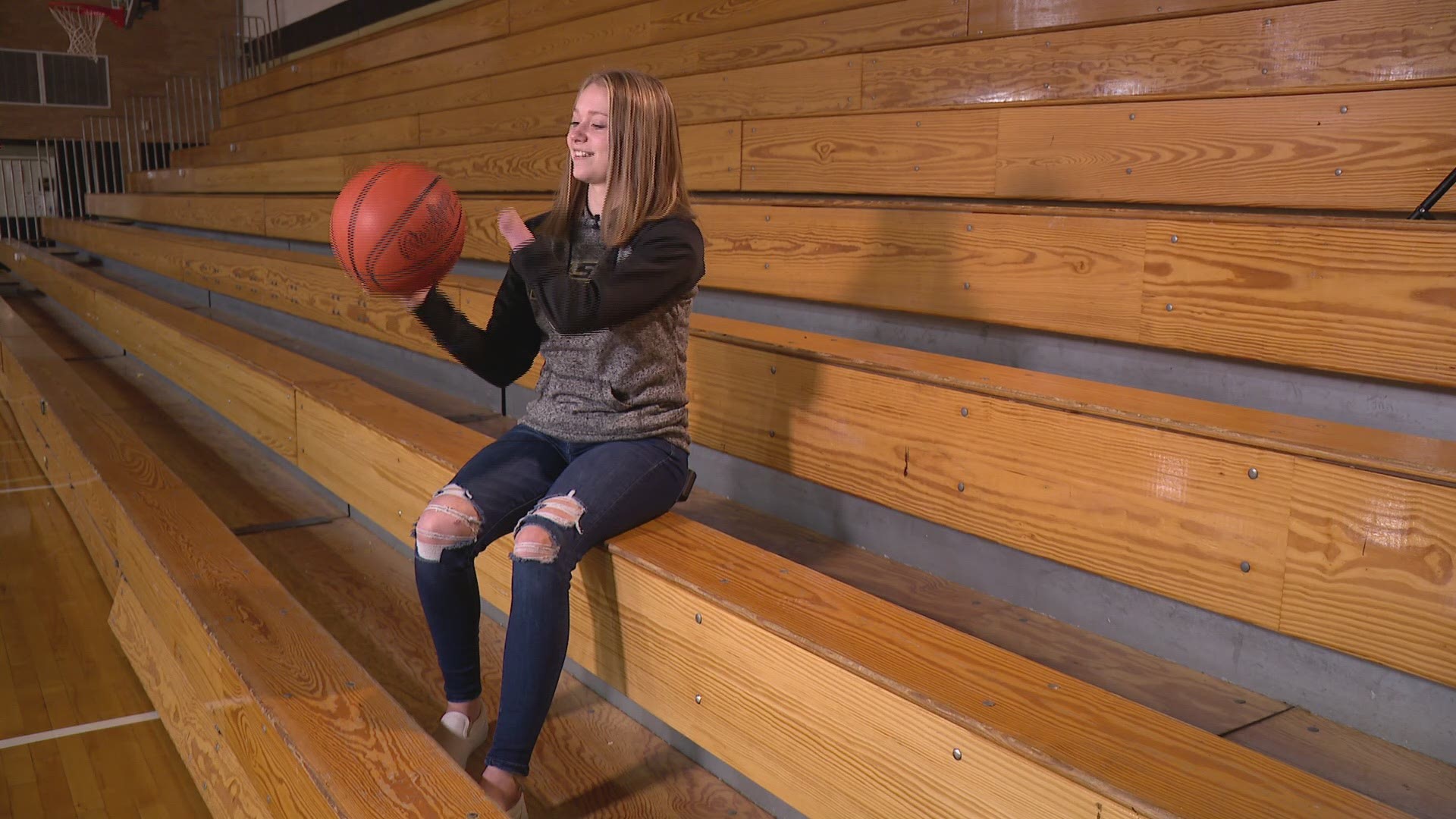 "What's she's doing is beyond inspiring," said Dorene, who has led St. Ignace to five state championships. "She has a beautiful shooting stroke; she scraps, digs and is relentless on defense."

Dorene wanted a sneak peek at how Ella would fair when facing varsity-level competition, so she brought her up for a few regular season games.

"She earned it," said Dorene. "We talk about getting deflections; getting your hands on passes; get your hand in the passing lane.

"You don't even feel bad by saying that because she finds a way."

In a few short years, Ella has gone from hiding her hand to 'handing' it to her opponents on the basketball court. In the process, she's literally changing the game for all players who live with limb difference.

"After coaching for twenty years, you think you kind of know what you're doing," said Garth. "Then all of a sudden, you don't.

"It's just Ella being Ella."

Her parents couldn't be more proud of the person Ella has become.

"We never treated her like she couldn't do anything," said Rachel. "Basketball has given her a lot of confidence in what she can do instead of what she can't do."

"I'm super excited for her," added Robert. "At her point in life, [not having a hand] is no longer a thing; that's how she was born, and she's good with that."

Ella Adams may lack an appendage, but in its place, she's gained confidence, and infectious smile and a mischievous laugh. She's combining those qualities, along with a basketball, to showcase what she 'does' have so nobody dwells on what she 'doesn't.'

The MHSAA Girls High School Basketball Tournament started Monday, March 2, 2020. Ella has earned a spot and will be playing with the St. Ignace varsity team for as long as they stay alive. 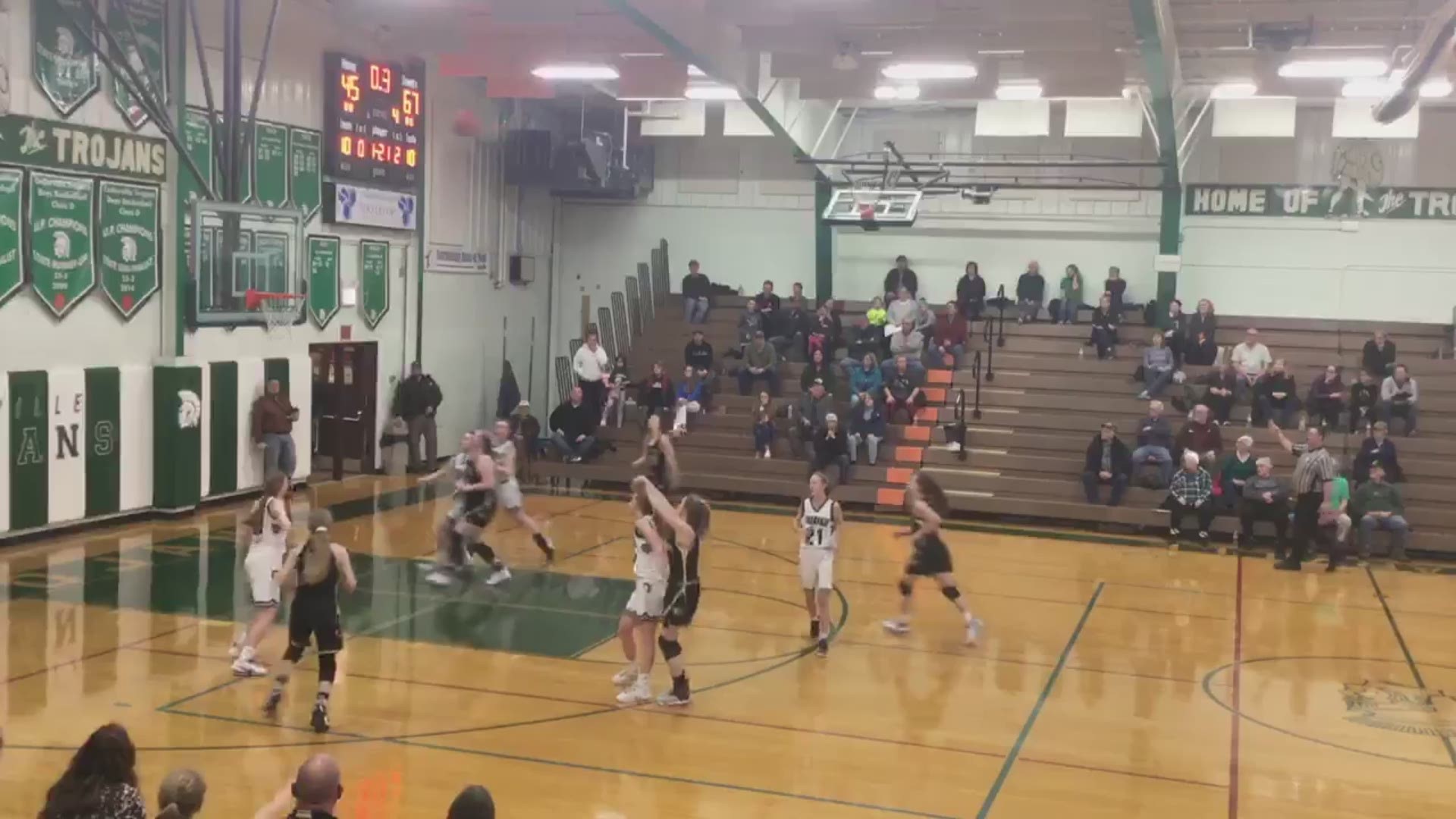 If you know of a story that should be featured on "Our Michigan Life," send a detailed email to 13 On Your Side's Brent Ashcroft:  life@13onyourside.com