Meet the Triad families behind those popular TV ads

The taglines are catchy, but the families behind the camera are just downright charming. 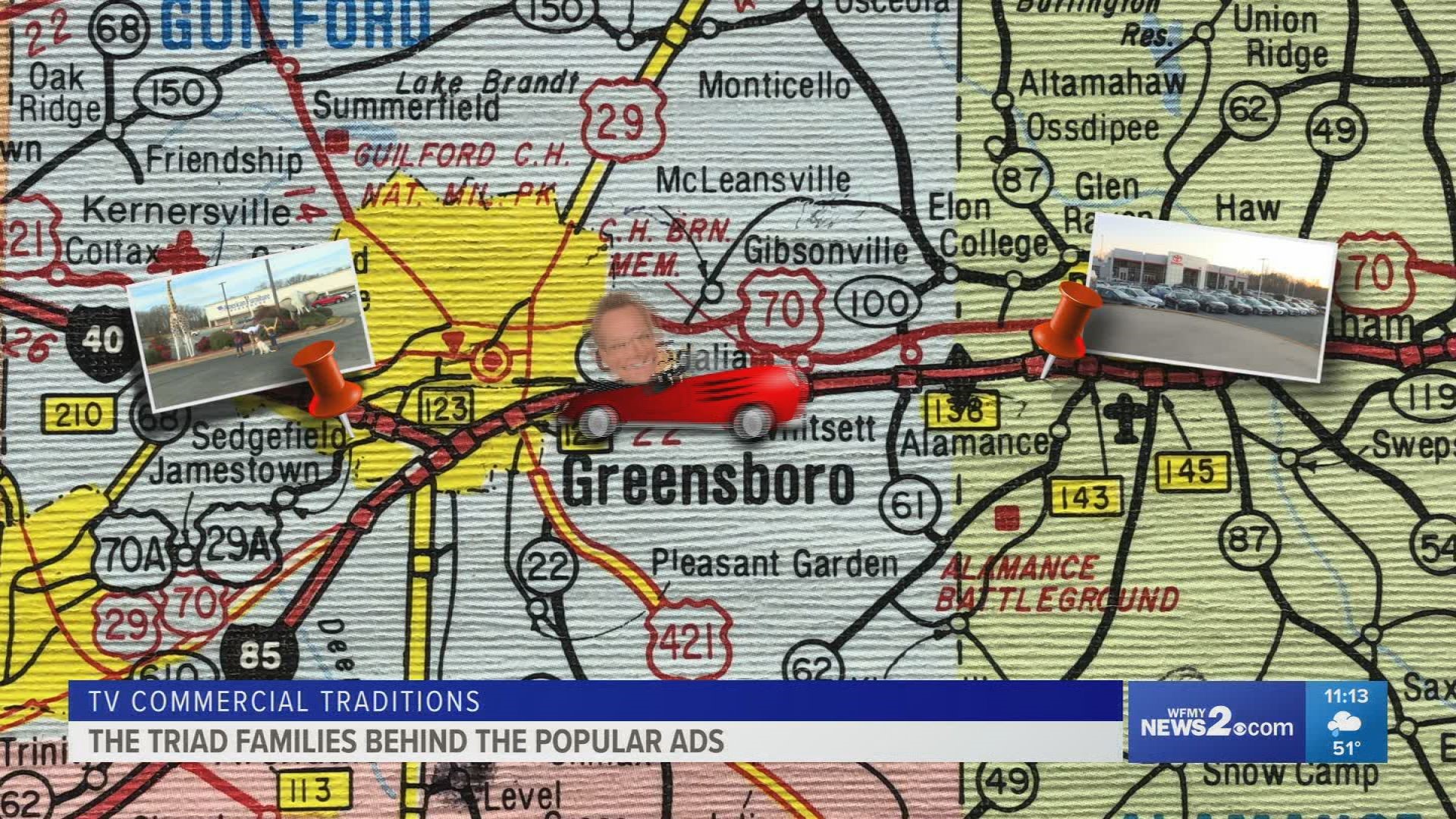 GREENSBORO, N.C. — In the Triad, some television commercials are a family business. You probably recognize most of them.

But do you know the families behind the commercials? It's not hard to see why they've made their businesses, a family affair.

No doubt, the Fletchers know furniture.

"I was raised in the furniture business, my grandfather started in it after World War II," said Jason Fletcher, General Manager of American Furniture Warehouse in Greensboro.

They've been known around the Triad since Fletcher starred in his first commercial as a young boy. "Dad turned to me, I was 12 years old, and handed me a script and put me in front of a camera, in a tent outside of the store and said 'you have 30 seconds to read this,’" remembered Fletcher.

His daughters are now his commercial sidekicks. "Really early on, Eden when she was two, starred in her first commercial with me,” said Fletcher. “She had a little Minnie mouse polka dot dress."

The Triad families behind the popular ads

They've enjoyed it ever since. When asked what she enjoys about being in the commercials, Eden Fletcher said, “just getting to sit on all the furniture and I like being with my sister and my dad and my mom."

"A lot of times, the girls get stopped in the grocery store and they'll say, 'where's furniture dog?' or 'man, I love your commercials,'" said Jason.

Credit: WFMY
Jason Fletcher did a lot of the American Furniture Warehouse ads himself until his daughters were old enough to join him.

And then there's the tagline “and as always, thank you!”

"That was my dad's idea and he felt like he wanted to say thank you to his customers," said Jason. "It really became a tagline and it became part of our culture and part of who we are."

For decades, Jason has been the main face of their brand.

So, will the girls eventually take over?

"I hope so,” joked Jason. “I'm training them up, I'm pointing them in the direction and we'll see what God has in store for them and their lives."

It's also a family affair at Cox Toyota in Burlington. You quickly see that when you drive past the massive billboard on I-40. Fifteen-year-old Rachel Lennon is the cheery face.

"It's really fun. I like being in front of the camera and not having to be in front of a bunch of people because I kind of have a little bit of stage fright."

The high school sophomore has been recording commercials since this first one when she was just seven years old.

"I remember we threw money in the air and I was with my little brother,” said Lennon. "I remember it was very strange because we had to do it so many times."

Credit: WFMY
Rachel Lennon is the granddaughter of Don Cox. This is the first ad she appeared in with her little brother.

"She just was a natural from the very start,” said Don Cox. His family has been in the car business since 1945.

You can imagine how proud he is of his granddaughter. "Everywhere you go, they know her."

"He's very proud of me and I'm happy because of that,” said Rachel. “He talks about it all the time."

They also have a tagline that's become a staple over the years: “Before you buy, give Cox a try!”

"We had had a couple out there, even some about a bunny and Mr. Cox didn't like the bunny so we chose 'before you buy, give Cox a try' and that's kind of stuck with us for the last 8 or 9 years," said Rusty Cox, General Manager of Cox Toyota.

And when Rachel's ready to move on, at least one of her younger brothers is hoping to take her place.

"They, of course, want to be in the commercials so I think once I got off to college, they'll take over," said Rachel.

It couldn't come soon enough for 11-year-old Caleb. "I'm tired of Rachel hogging all the attention all the time," joked Caleb.

Credit: WFMY
Caleb, Rachel's little brother, says he can't wait to take over the Cox Toyota commercials when she goes to college!

"He's something else,” said Rusty. “Then when Caleb takes off and goes to school then we've got another one coming behind him. Madison is about that tall and she's a redhead and she's a doll baby."

A sign of more to come for a business and a family just getting started.

We think you'll also love these stories from the Triad:

RELATED: He made a dating app where he's the only guy allowed. He got a girlfriend!