Watch Bailey and her calf live in a YouTube stream provided by Cheyenne Mountain Zoo. 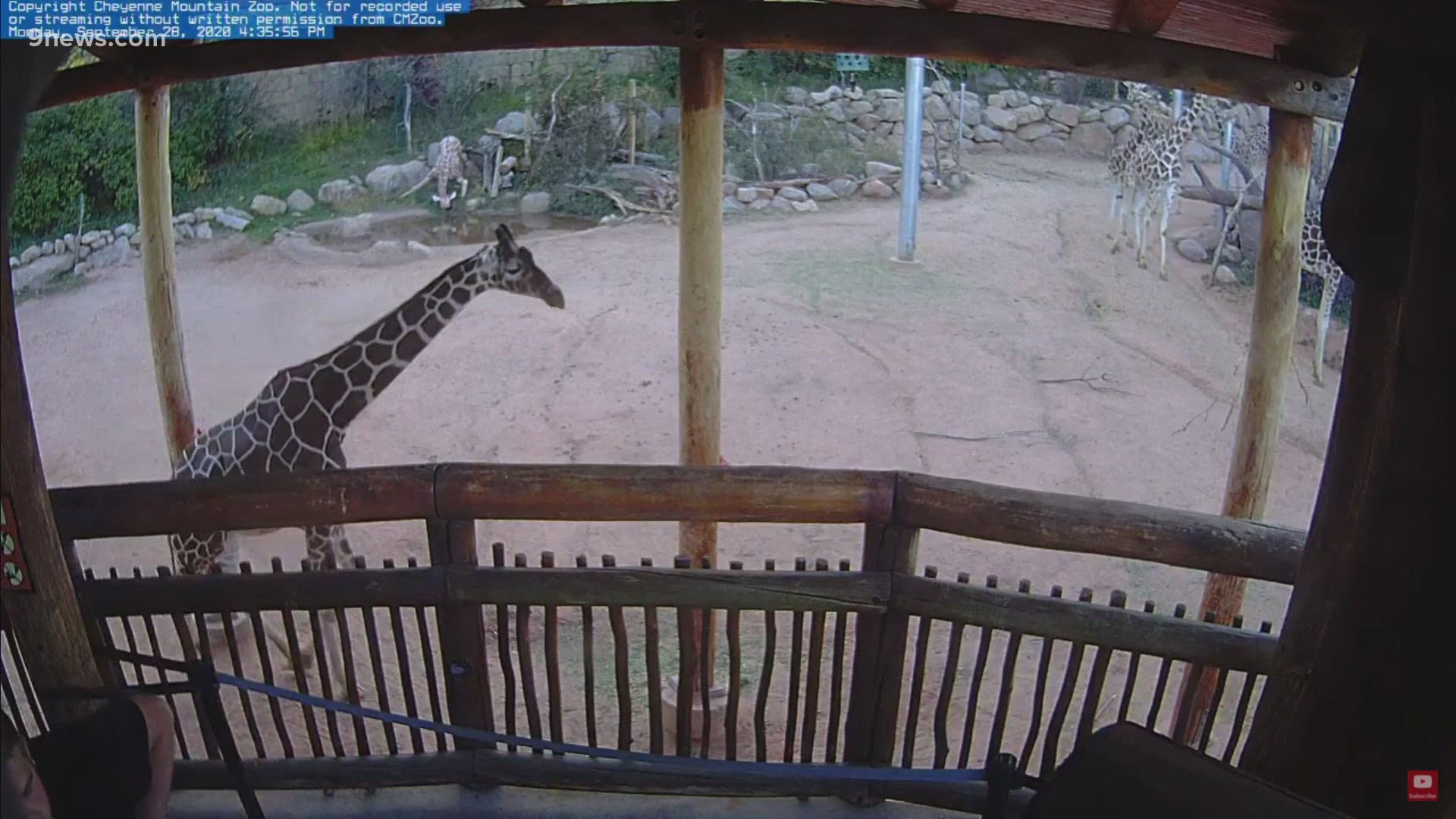 COLORADO SPRINGS, Colo. — An adorable baby giraffe was born at the Cheyenne Mountain Zoo in Colorado Springs on Monday, Sept. 28.

Bailey, an 8-year-old reticulated giraffe, went into labor Monday morning following a 15-month pregnancy and welcomed her very first calf to the herd at 11:37 a.m. Bailey and the female giraffe calf are doing well, the zoo said.

Zoo staff said the first indication that labor was starting was the calf's two front hooves emerging from its mother. A short time later, the baby giraffe was born.

"The calf and mom seem to be doing really well!" the zoo said in a Facebook post.

At first, the calf had a hard time standing because she had positioned herself in a corner of the stall and she kept bumping into the walls before she could get her footing, the zoo said. After waiting to see if she could get up on her own, keepers and vet staff had Bailey to move into another area so they could give the calf a hand.

The team picked her up and moved her into the middle of the stall around 1:27 p.m., the zoo said. The calf took her first steps on her own after a quick medical assessment, then a nudge from mom, at 1:38 p.m. As long as keepers observe that baby and mom are doing well, they will continue to let Bailey take the lead on providing her care.

Bailey was moved to a sand stall on Aug. 29, the day zoo staff anticipated was the earliest she could go into labor.

Following Cheyenne Mountain Zoo tradition, the calf will be named after she is 30 days old.

You can watch Bailey and her calf live from an indoor stall camera provided by the zoo:

“Giraffe calves can be fragile, so we try to encourage people to be realistic about the risks while they enjoy the excitement of the hope we know giraffe calves bring to so many,” said Jason Bredahl, African Rift Valley animal care manager. “We’re optimistic that advances in medicine, like the availability of giraffe plasma and stem cell treatments, will help us navigate any medical needs the calf may have.”

Bailey was born at Henry Doorly Zoo and Aquarium, in Omaha, Neb., in March 2012 and moved to Cheyenne Mountain Zoo on a breeding recommendation in Sept. 2016, the zoo said. This was her first calf.

With the addition of Bailey's calf, there are currently 17 reticulated giraffes in the Cheyenne Mountain Zoo herd, according to the zoo.

RELATED: Denver Zoo's 'Boo at the Zoo' returns with some changes