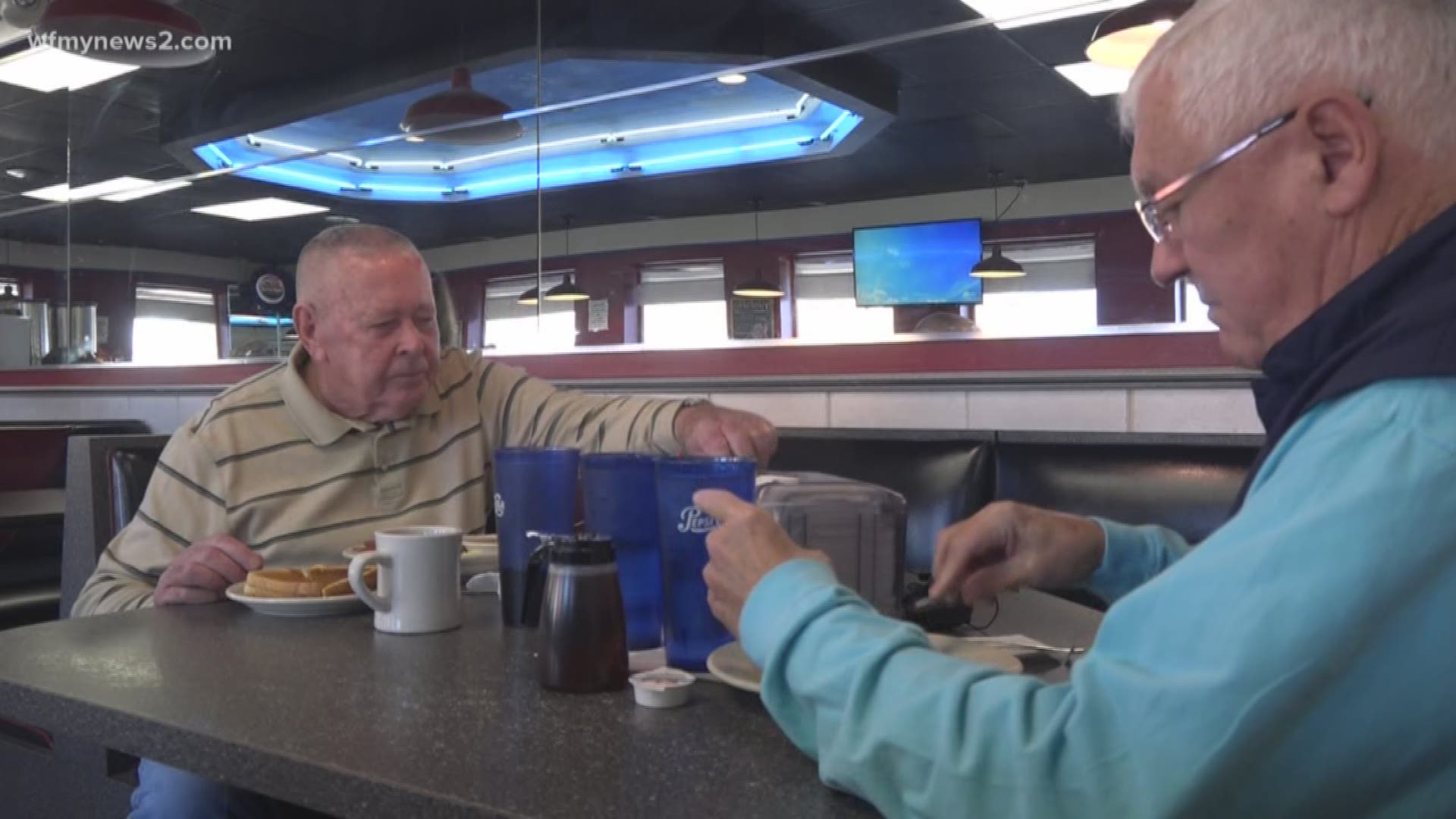 GREENSBORO, N.C. — As the sun comes up, business starts brewing at Jake's Diner in Greensboro.

Every Tuesday, there's a pot of coffee waiting until 9:00 a.m. when Jackie Joyce walks in.

"I look forward to every Tuesday. If I don't see him, I know there's something wrong," Crystal Morrison, Jake's Diner waitress, said.

For nine years, Joyce has come to Jake's for breakfast. Many of those years, his friend, Mike Nunn, has joined him. Often times, there are others.

After all these years, Crystal knows their orders by heart and keeps the coffee coming.

"He's a good guy, real sweet, never has a dull moment. He fills me in with his stories and everything," Crystal said.

Stories shared around a diamond-shaped table, much like the diamond they once called home at Smith High School in Greensboro.

Back in the sixties, Joyce was 'coach' to Nunn.

"I put down I wanted to play third base. He told me you either catch or you don't play at all," Nunn joked.

Nunn said everyone wanted to play for Coach Joyce, especially after leading two teams to a state title.

However, 30 years later, it's not the stats or the championship games they talk about, it's the memories they made off the field.

"Just to be able to sit here with him and talk about things. Good things, bad things. He's sort of like a second dad to me in a way," Nunn shared.

Nunn said when he retired, Coach Joyce invited him for breakfast. 7 years later and they have the same waitress, same coffee, and same camaraderie.

When I asked Coach Joyce why he did it, he said, "that's the way I came up."

Joyce grew up on a farm in Rockingham County, and he loved baseball and football.

"Well if you come up on a farm you don't have a whole lot other than sports that you can go to, that you can identify with I guess," Joyce said.

After high school, Joyce joined the Air Force with a dream of working in aeronautics, but life threw a curveball.

Instead of launching space shuttles, he began careers in baseball and football.

"I've been real fortunate to be around good players," Joyce said.

Players like Jeff and Joe Bostic, who were all-pro players in the NFL, and Vince Evans.

Many of his players would like to see him end up in the North Carolina Sports Hall of Fame, but Joyce laughs off the idea. He said the game was never about the wins, it was the relationships.

Which is something he still holds dear and likes to cherish over a cup of coffee, every Tuesday morning.