Elope Greensboro married nine couples for free with their Fun Fourth Festival "Red, White and Say 'I Do'" Celebration. 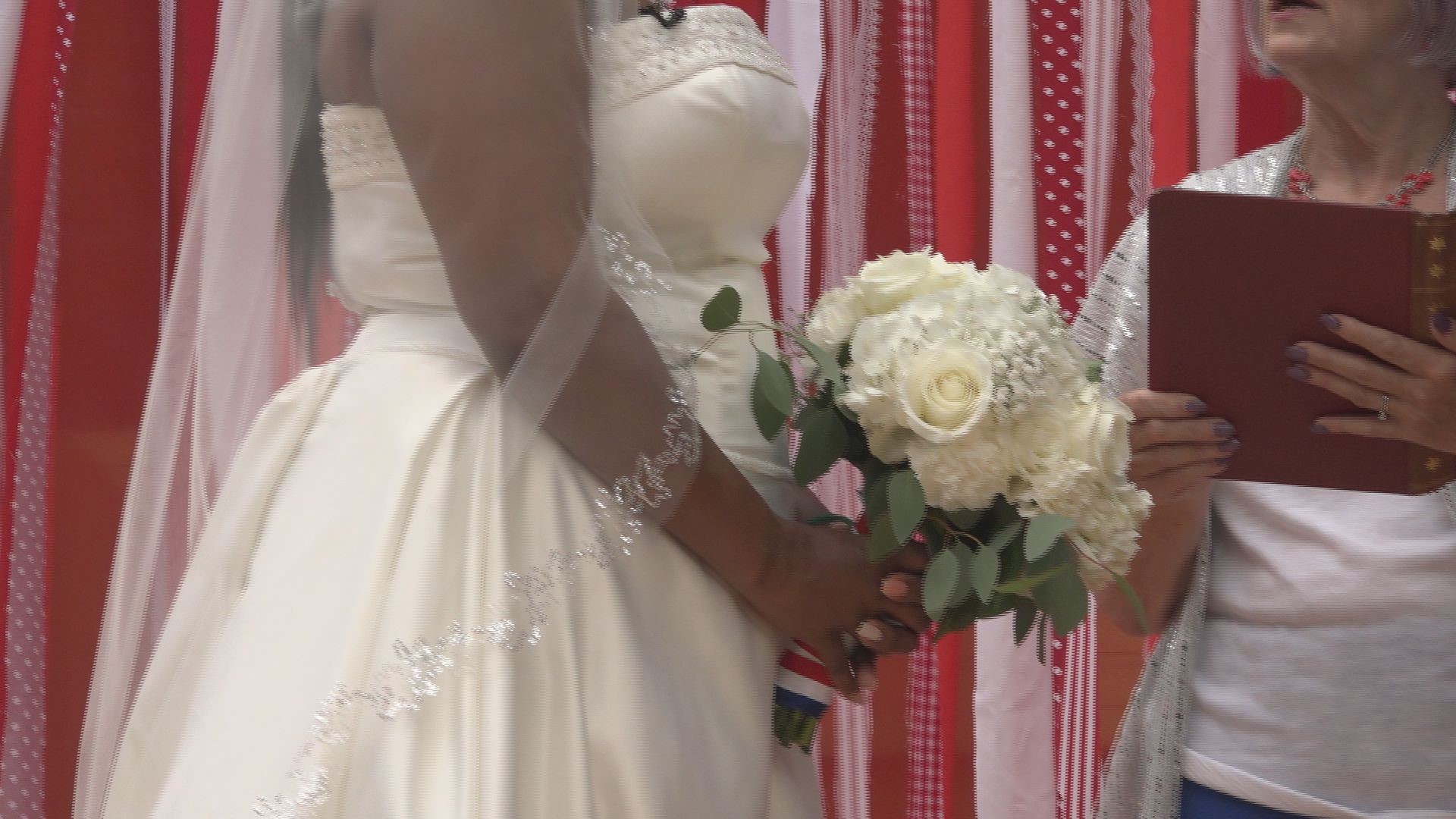 GREENSBORO, N.C. — Earlier this year, Dee Dee Pinnix woke up with a diamond on her finger the size of a marble. "I was washing my face, brushing my teeth and I looked in the mirror and saw it! Joseph came up behind me and said, 'I didn't want to wake you. You were sleeping so peacefully.' My mouth dropped," Pinnix said.

Joseph proposed on the spot. It was a spontaneous moment for a couple that can't seem to get enough of one another.

"She makes me so happy," Farrior said, "the surprise was fun."

The two were itching to get married. Joseph especially, Dee Dee says. When the pair saw the perfect opportunity in the form of "Red White and Say 'I Do.'

Through Elope Greensboro, the Fun Fourth Festival offered to wed nine couples for free. The bride and groom would walk down the aisle (read: cross-walk) and tie the knot on the corner of East Market Street and South Elm in the middle of the city's July 4th celebration.

Local vendors promised to take care of the entire wedding planning process, from officiants and photography to red, white and blue wedding bundt cakes. It's not your typical wedding, but with even low-key wedding ceremonies running up thousands of dollars, Pinnix and Farrior applied, hoping for the best.

"It's different, and it's exciting," Dee Dee said, "now that I'm older and have been through another marriage, I figure that if Joseph's love is real here and now it will be real anywhere, anytime. Materialistic things are here today and gone tomorrow. It shouldn't matter."

When Dee Dee got word her application was selected as one of nine couples to receive the free wedding, she was ecstatic. Her mind, however, quickly turned to the mischievous.

"I can be spontaneous too," Dee Dee grinned, "this is my way of getting him back!"

She didn't tell Joseph. The couple would be wed on July 4th, in front of thousands of people. Joseph would not know until the moment he was pushed onto the stage facing his bride across the isle in her wedding dress.

"He told me he would've married me yesterday! I thought, 'Well okay then!" Dee Dee said.

In the weeks leading up to July, Dee Dee planned a fake wedding for August 10th. The two were fitted for a tuxedo and a dress, signed marriage licenses and invited guests.

On the 4th? Joseph's brother, Mike, stalled. The pair wandered the crowded streets of the Fun Fourth Festival, searching for a photographer to take fake engagement photos. They told Joseph they could "meet up with Dee Dee later in the city."

"Not in the slightest. Oh, yeah. It'll work," she said, "he’s going to love it because he’s going to see me, and he’s going to know what’s happening. He'll probably laugh. He's got a great laugh."

An hour before the wedding, Dee Dee's confidence briefly fluttered. The ceremonies were delayed by threatening storm clouds. Her feet impatiently tapped the floor as make-up artists attended to her. However, she emerged from the dressing room, slipped on her tiara and saw herself in the mirror, all was well in the world again.

The plan was executed to perfection. Joseph was led behind the stage, then booted out front towards happily-ever-after. The look on his face said it all.

Red, White, and Say I Do

1 / 12
WFMY
Nine couples were selected to say 'I Do' in front of friends, family, and downtown Greensboro at the Fun Fourth Festival.