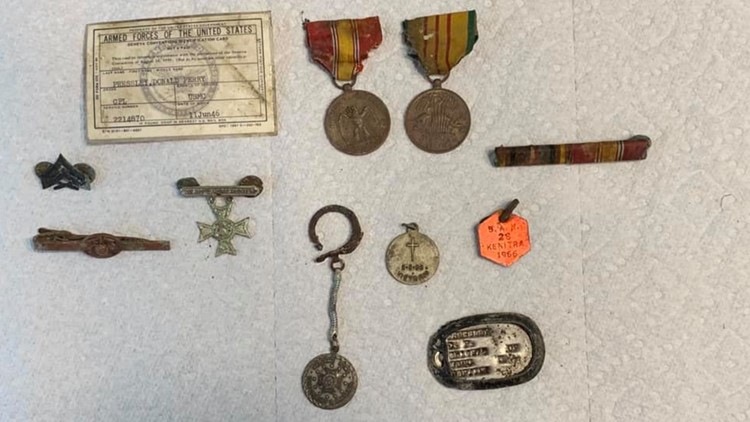 Photo by: Robert Danze
Robert Danze, a Terminix employee, found a military veteran's medals in the crawl space of a home in Greensboro.

GREENSBORO, N.C. — Robert Danze, 29, is used to finding trash and debris in crawl spaces as part of his work with Terminix. But on Wednesday, he stumbled across a treasure trove of military memorabilia under a home in Greensboro, NC.

The discovery led Danze on a social media quest to find the veteran who the items belong to.

"It blew my mind," said Danze. "If you would have looked at it for just one second, it looks like trash."

Danze and his Terminix team were removing insulation in the home's crawl space when he spotted a metal crate.

Inside the metal crate, Danze's eye was caught by a ribbon sticking out between some paint cans.

So he dug around, finding a wide array of military artifacts from the Vietnam War, including an identification card, metals, pins, a campaign ribbon, a rank insignia, dog tag, a Marine Corps tie clip, and pistol sharpshooter qualification badge. 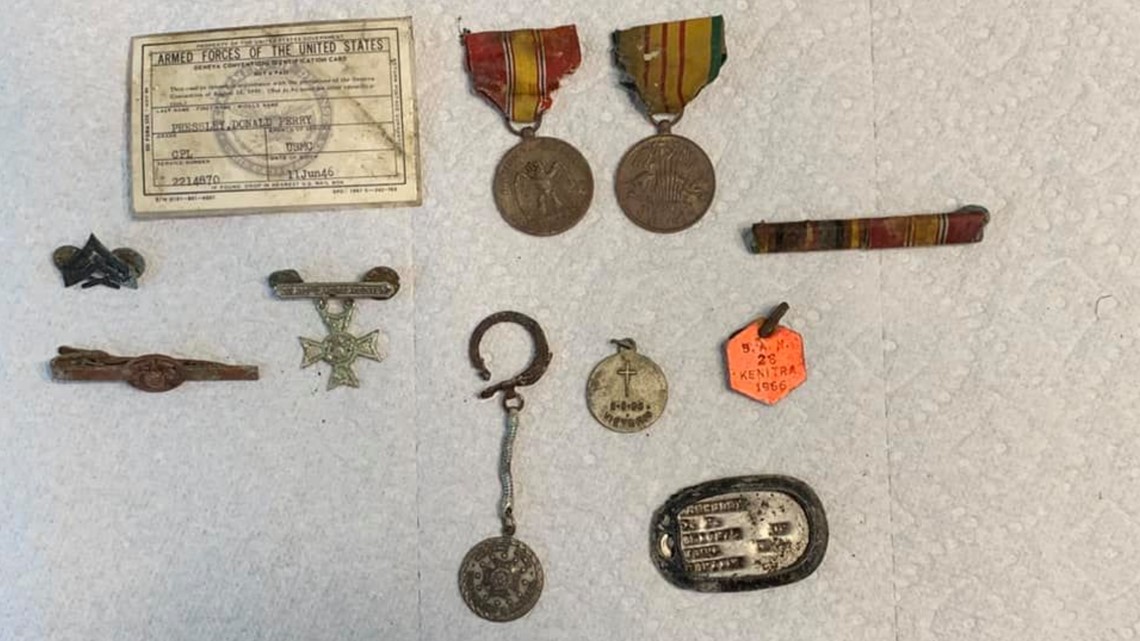 "These things were pretty much hidden in the paint cans in the metal container. They were just in the very bottom," said Danze. "If it weren't for the metal ribbon, I probably wouldn't have seen it."

Turns out, the homeowner was just as puzzled by the find.

"She was just as shocked by it as I was. She had no idea how they got there," said Danze.

Danze was determined to find who the military memorabilia belonged to and return the cache to its owner.

With the homeowner's permission, Danze took the items home, cleaned them off, photographed them, and posted on Facebook his quest to find the owner.

"It was a shot in the dark," Danze said. And it paid off.

Yesterday morning, The Facebook post reached one of the veteran's relatives, and it got back to his son, who messaged Danze.

"I was excited to see that. I woke up and saw a Facebook post from my cousin's wife. I saw the medals and I was like, 'Wow,' " Pressley Jr. told WFMY News 2 on Friday.

Pressley said his father served in the Vietnam War, and is now in the VA Medical Center is Salisbury in great condition.

"He was excited," said Pressley when he told his father about the find.

As for how the items got lost in time in the crawl space, Pressley said family used to live in the Greensboro home, but his father could not remember how they got there.

"I didn't ever think that this would happen to us," said Pressley.

Now that Danze has connected with the Pressley family, who the military memorbilia belongs to, Danze said they have plans to meet so he can hand over the items.

"I wanted to at least try to get them back to the family. I know if it were me or my family, I would want that to happen," said Danze. "I know what the soldiers in Vietnam went through, I wasn't alive, but I had to get in touch with the family."

WFMY News 2 will be there as the Terminix employee unites with the Pressley family to share the military memorbilia.