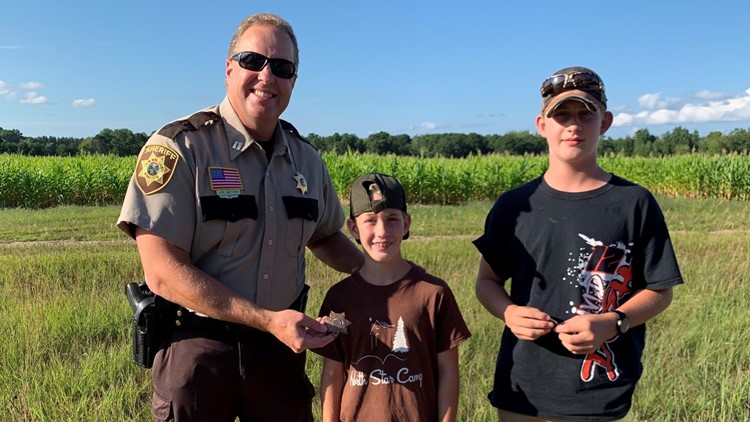 NISSWA, Minn. — It was the first law enforcement badge with his name engraved on it, something now-Captain Joe Meyer will never forget.

So when he lost that Crow Wing County Sheriff's Department badge on a cold winter night nearly 30 years ago, Meyer was determined to find it.

The young deputy was dispatched on a call to help a motorist who had slid into a ditch. Meyer pushed, pulled, and did the physical work to help that person get free and on their way. When he got back to the office he noticed that the badge, which was pinned on his winter coat, was gone.

Meyer returned to the scene the next day and searched for hours in the deep snow to find his badge, to no avail. He said he thought about it for years.

"Every time I drove past this place I thought that unless somebody found it and never said anything, that badge was still here," he explained.

Turns out it was, and all Meyer needed to get his precious badge back was a couple of sharp-eyed kids on bikes. Zeke and Rex Larson were riding a trail near Nisswa when one of the boys spotted something something shiny and out-of-place. They dug out Meyer's badge and brought it home to show their dad, who knows the deputy. It wasn't long before the sheriff's badge, a bit tarnished and missing a Minnesota state seal but otherwise in good shape, was back in the hands of its rightful owner.

Meyer shot a video with Zeke and Rex laying out the saga of his old badge and posted it on the Crow Wing Sheriff's Facebook page. So far it's drawn dozens of comments and more than 200 shares.

"I love stories like this!," posted Kaela Smith. "Wish there were more stories of young people stepping forward and making a difference in people's life. My hats off to the parents of these two young men."