'Nobody Will Eat Lunch With Me.' Freshman Gets Lunch Buddies After His Big Sister's Tweet Goes Viral 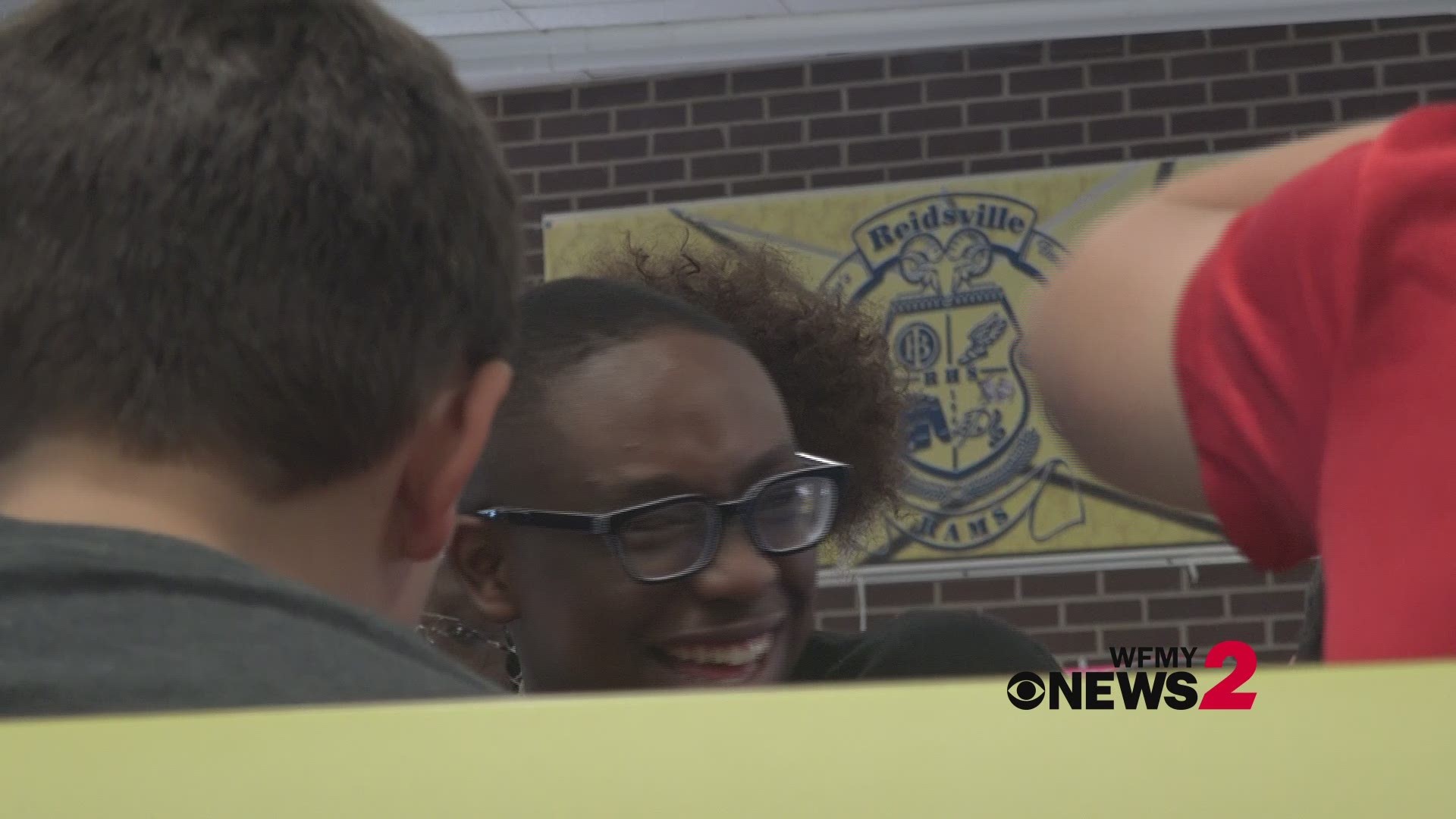 Caleb Wrenn, a freshman at Reidsville Senior High School, is surrounded by four seniors in the lunch room. Many are strapping varsity athletes, but not Caleb. His face pops in and out of view among the trees, still waiting on the pubescent 'go-juice' he hopes will grow his head above their shoulders and pack on some big-boy muscles.

He's the only white kid in the bunch. His black sneakers and 'Spiderman' tee contrasting the FILA swag and Jordan's donned by the rest of the group.

From a distance, Caleb looks like he got lost navigating the tightly wound cliques and crowds that dominate the social scene in most high schools. Get closer, however, and see, in this instance, the clay doesn't fit the mold.

Caleb's right at home in the circle, bouncily joking about 'Fortnite' and returning smiles to the junior girls waving across the lunch room. He daps up the older boys when his focus shifts to the new important task of the moment with Demontez Canada, a senior wide out on the football team. The pair rehearses a secret handshake, that, one would assume, provides unlimited clout to the skinny freshman in his first month of high school.

"You're our brother," Demontez said to Caleb as the group splits, "you have a lot of best friends now."

This lunchroom scene was unimaginable just a few days ago. Caleb is a little short for his age, and on the first day of high school, his height, or lack thereof, became the subject of ridicule for his classmates.

Caleb sat alone at lunch, doing his best to ignore the snide comments.

When he got home, he plopped down on the couch and saw a text message from his sister Leah:

He explained why his first day of school was a bummer. Leah offered her advice, but then got another idea. She posted the message on Twitter, encouraging her former classmates to cheer her brother up.

The post went viral overnight. Thousands of retweets and likes caught the attention of local news outlets and "Access Hollywood."

More importantly to Caleb, it caught the attention of his classmates.

"I saw it in our group text, and we all decided to do something about it," said Demontez Canada.

Demontez is a senior wide out for the Reidsville High School football team. The next day, he and his buddies approached the school's staff, and had a long conversation about situations like Caleb's.

"Things needed to change," Demontez said, "It's not all that bad here, but it can be better, and I think nobody should have to deal with that stuff."

The group rearranged their lunch schedules to be aligned with Caleb's period. They found him, introduced themselves and the rest is history.

"I was really glad they came over," Caleb said, "it's made things better for sure."

They've sat with him every day since. What the older boys didn't expect, however, was how much they would enjoy spending their lunches with Caleb. They are becoming good friends, with Caleb spending time with them outside school and attending football games sporting their jerseys. They've bonded over video games, girls and perhaps most importantly, their mutual respect for one another.

"He's goofy, smart, like Caleb has really big brain," Demontez laughs, "but he's taught us a lot. A lot about ourselves, I think."

The group's new goal is to extend the joy they've found to others.

"Everybody should be like this," Caleb said, referencing his new circle of friends. Demontez nods in agreement.

With the help of some of the school's administration, they're starting a program called "We Love You" with the goal of extending this same level of friendship to their other classmates. It's a step, they believe can make a positive change extending beyond Reidsville High.

"Hopefully, now," Demontez said, "we can share this with the world."

RELATED: 'The joy on that young man's face was priceless' | UT fan bullied for homemade shirt gets Big Orange delivery