When the Apollo 11 spacemen returned to Earth, they were the hottest commodities on the planet. A Greensboro woman was by their side for their entire world tour.
Author: Chris Venzon
Published: 2:08 PM EDT July 16, 2019
Updated: 8:09 PM EDT July 16, 2019

GREENSBORO, N.C. — Tuesday marks the 50th Anniversary since the Saturn V rocket launched, sending the world's collective imagination into orbit. The successful Apollo 11 moon landing mission stands as one of the greatest human achievements in history, and an iconic moment for the United State's space program.

The period of bitter competition and tension with the U.S.S.R. that hung over the Cold War-era spurred the innovation and that aimed our ambitions at the stars. Space commander Neil Armstrong's first words off the Eagle Lunar Module, "one small step for man. One giant leap for mankind," is now etched in the annals of American lore.

The 'giant leap' on the technological front had not yet, however, made its way to the social front. Women involved in the space program in the 1960's are now receiving further credit in movies like "Hidden Figures" and in news programs across the country. Income inequality and workplace discrimination were still prominently felt by the women who lived it.

But back in the summer of 1969, Geneva Barnes had made her own first steps towards equality in her workplace.

"I worked really hard to get where I was," she said, "and I loved working with the people I did." 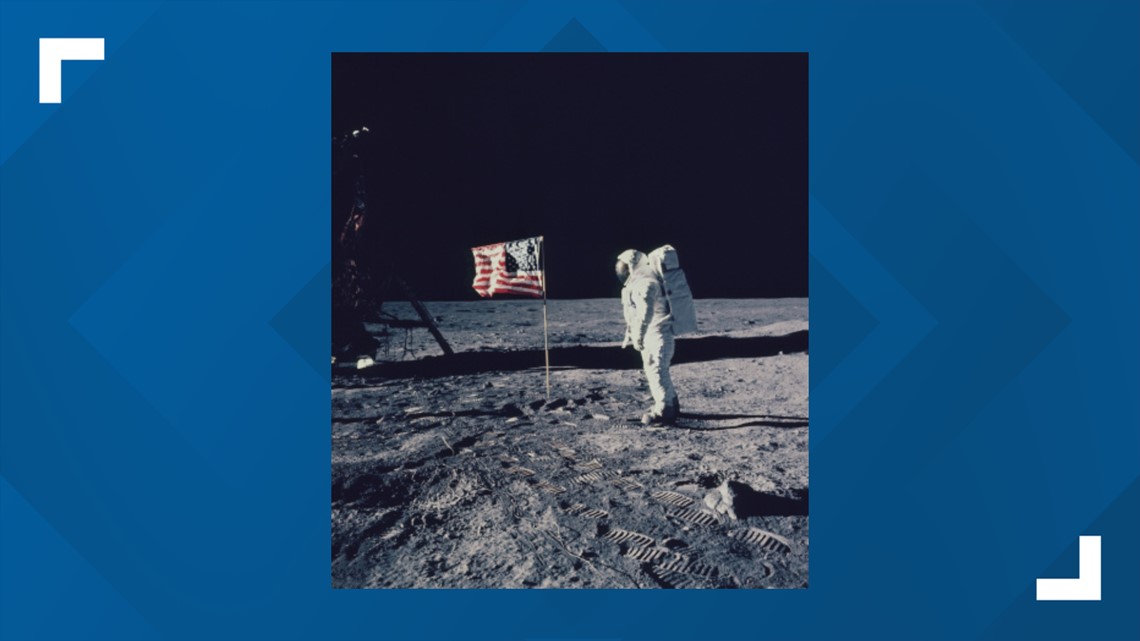 01 / 05
Apollo 11 moon landing
02 / 05
The Apollo 11 crew leaves Kennedy Space Centers Manned Spacecraft Operations Building during the pre-launch countdown.
03 / 05
The Apollo 11 spacecraft Command Module being lowered to the deck of the U.S.S. Hornet. Note that the flotation ring attached by Navy divers has been removed from the capsule.
04 / 05
Picture taken on July 20, 1969 shows astronaut Edwin E. Aldrin Jr., lunar module pilot, walking on the surface of the moon during the Apollo 11 extravehicular activity (EVA). Astronaut Neil A. Armstrong took this photograph with a 70mm lunar surface camera. With one small step off a ladder, commander of the Apollo 11 mission Neil Armstrong of the US became the first human to set foot on the moon on July 20, 1969, before the eyes of hundreds of millions of awed television viewers worldwide. With that step, he placed mankind's first footprint on an extraterrestrial world and gained instant hero status. AFP PHOTO / NASA (Photo credit should read NASA/AFP/Getty Images)
05 / 05
A family watches the American astronaut Neil Armstrong commander of Apollo 11, setting his foot on the moon 21 July 1969 in Paris. Hundred of millions of television viewers round the world watched this event on television.

One of NASA's most talented stenographers, Barnes was selected to accompany the Apollo 11 astronauts on their President Nixon commissioned "Giant Leap" world tour. The party would travel to 27 countries in 45 days, promoting the space program at parades wherever they went. Genny, as she's known, would transcribe letters to dignitaries and ambassadors, write speeches and schedule appearances.

From laughing with Armstrong about Playboy Magazine's modeling requests to steak dinners with Michael Collin's wife in the Congo, the trip, undoubtedly, was filled with memories meant to last a lifetime.

"I don't know what my was my favorite part. There were too many good things to choose from." she said.

She would work 30 years for NASA before retiring to part time mail room work in the White House. Her role at both prestigious organizations was not lost on the women who knew her. One in particular was especially close to home.

"Her tenacity, her 'never-giving-up' was really inspirational to me," her daughter, Susan said.

Genny's experience then would be remarkably different if it had happened today, but she holds no ill will.

"We didn't get treated like we were as good at what we did as we were and we didn't get paid what we deserved," she said, " but I'm proud of what I did there. I wouldn't put myself on the same level of people who made decisions on more important matters, but I am happy about the progress people have made today."

RELATED: Apollo 11 at 50: Celebrating first steps on another world