Every day for the past six years, Tom Deaton has spent his time volunteering at the Novant Health Forsyth Medical Center Cancer Treatment Facility -- playing guitar and singing songs for sick patients. 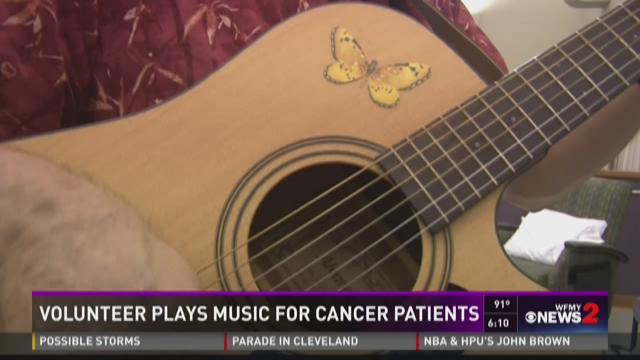 But sometimes, when the fight gets too tough, patients need something to make them feel better.

Even something as small as music or laughter can go a long way.

That’s where Winston-Salem’s Tom Deaton steps in to help!

Every day for the past six years, Deaton has spent his time volunteering at the Novant Health Forsyth Medical Center Cancer Treatment Facility.

He talks to patients one-on-one and asks them about what kind of music they like.

Then, he strums his guitar and sings songs for the patients undergoing treatment for cancer.

Ronnie Ford is one of Deaton's biggest fans.

“It lifts you up,” said Ford. “You don't think about what's going on around you. You are listening to him.”

Ford was just diagnosed with lung cancer back in April.

Ford says on the first day of his treatment, Deaton’s music made him feel more comfortable.

"I didn't know what was looking me in the face,” said Ford. “But he came in and got to singing and it just calmed me down all the way."

Perhaps the best thing about Deaton’s music is the fact that it calms the patients down. It eases their fears.

Scott says when the patients are more relaxed, it’s easier for nurses to start IV’s, draw blood, and give shots.

"If they're not relaxed, sometimes it rubs off on you," said Scott. “The music puts everyone at ease and makes it a lot easier for us all.”

Deaton says the most important thing is putting a smile on the face of the sick patients.

"I've had a lot of hurt in my life and it really means a lot if someone can make you smile while you're hurting. That's just my goal in life,” said Deaton. "I've sung to cancer patients that have been given very little time to live and they will look up at me and smiling tell me that I've made their day. It just doesn't get any better than that.”

Novant Health officials say they plan to start a music therapy program at the Forsyth Medical Center soon so all patients can use music for treatment.