'Despite every attempt to hang on as long as we could, we simply aren't able to any longer.' Charlotte BBQ staple Bill Spoon's to close

The restaurant has been serving BBQ for almost 57 years. The owners will serve up the final plate September 16. 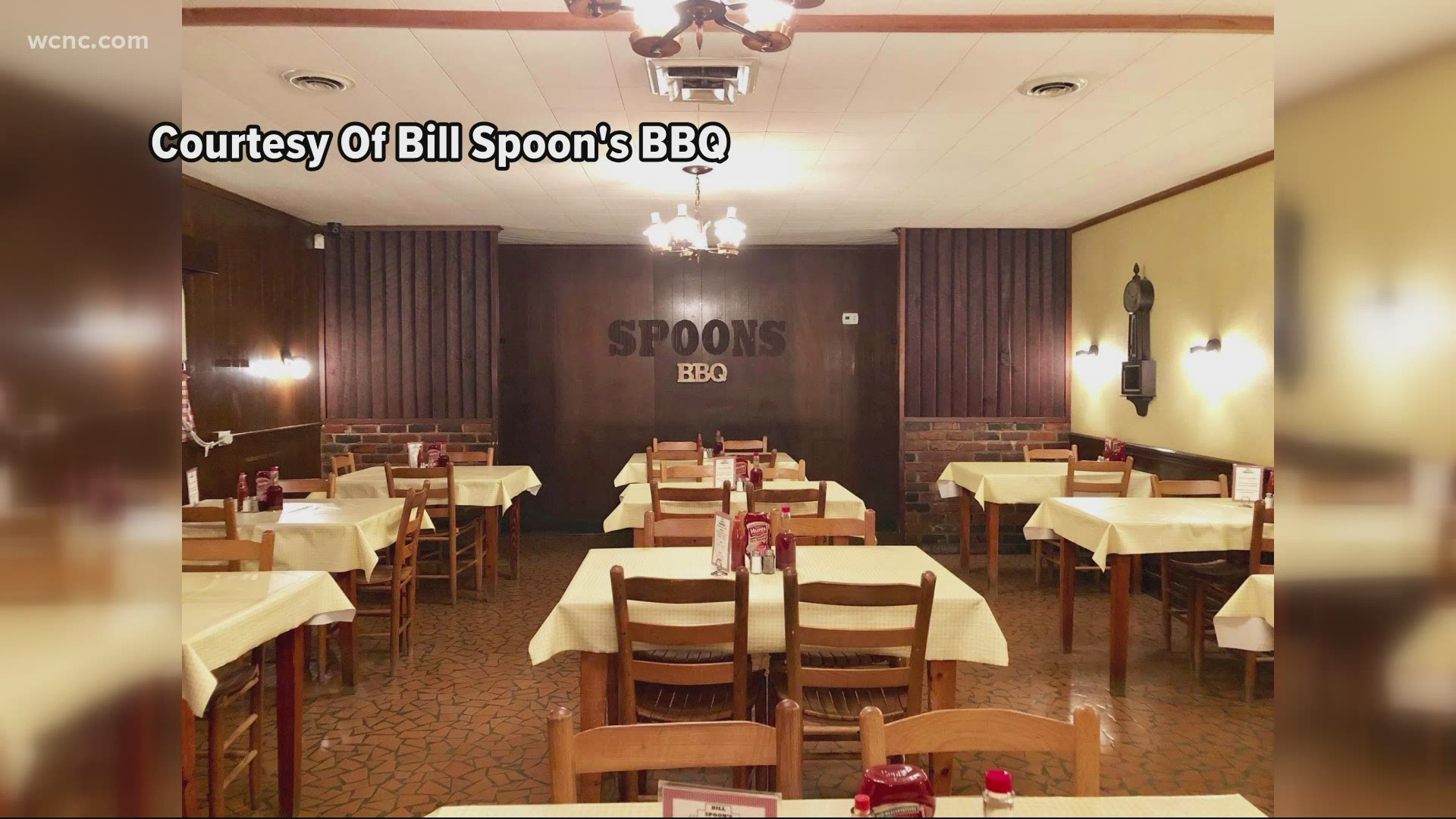 CHARLOTTE, N.C. — Bill Spoon's BBQ has been a favorite among Charlotteans for decades. But the South Boulevard restaurant was hit hard by the pandemic and will be forced to close for good on September 16.

"With a heavy heart, we must close our doors," reads a post on Facebook from owner Steve Spoon.  "We are so grateful for the many customers that we have served over the years. So many of you have become friends, and we have memories that will last a lifetime."

On Tuesday, a line of customers trying to get one last taste of the barbecue stretched out to the street.

Willie McRae has been coming to eat at Bill Spoon’s Barbecue since 1982. He stood in line patiently waiting Tuesday morning.

“I’m going to miss it a great deal,” McRae said. “I won’t eat barbecue nowhere else, not in Charlotte.”

Dan Wooton has been a customer since 1998. He got in line at 10:30 a.m. and was one of the last customers served before the restaurant sold out for the day before noon.

"I wanted to get one last taste of Bill Spoon's, and I ordered a jar of the sauce,” Wooton said. “Maybe I'll find something like cereal to put it on."

Gearldine Reeves stopped by the restaurant Tuesday one last time. She said she started working at Bill Spoon’s Barbecue when she was 15 years old in 1965 and served up barbecue plates for 13 years.

"I just sat down and cried, but we're good friends with Steve and Ashlie,” Reeves said. “I mean it's like, it's not like we won't be seeing them, but it's just going to be tough knowing that I can't just run up there and grab a sandwich anymore."

Steve Spoon's grandparents opened the restaurant when South Boulevard was just a 2-lane dirt road.  He started working there at age ten before buying the popular restaurant in 2006.

"We will miss the smiles, laughter and conversations over a plate of BBQ and a cold glass of homemade sweet tea," the post said.

Many people who have lived in Charlotte for awhile remember the long lines that often wrapped around the building.  Those lines have gone down over the years, but the quality of food served up at Bill Spoon's has not.

"2020 has proven hard for everyone, but has truly been detrimental to small businesses like us that were already barely making ends meet.  Despite every attempt to hang on as long as we could, we simply aren't able to any longer," said Spoon's Facebook post.

Spoon said he knows it's what his grandfather would have wanted him to do.

Spoon's BBQ was enjoyed by the masses, including many in the area who couldn't even afford to eat there. Serving Spoons Foundation served nearly 4,000 meals to the homeless over the years, according to the restaurant.

"Spoon’s BBQ is something I’m proud of, and I feel has touched so many lives along the way.  We have always strived to treat the businessmen who stopped by for lunch and left a hefty tip the same as the many regular homeless who stopped by, offering only a handshake and a ‘thank you’ to pay for their meal," said Spoon.

With the current mandate, Spoon's BBQ is only operating curbside service right now, but the Facebook posts invites everyone to stop by for one last meal.

"Charlotte, we will miss serving you.  We thank you for being a part of our lives, for enjoying BBQ as much as we have, and for all of the many memories we have made along the way."

RELATED: City of Charlotte creates program to help businesses in the food, beverage industry that have been impacted by COVID-19

RELATED: The King's Kitchen is closing again to focus on feeding community members in need