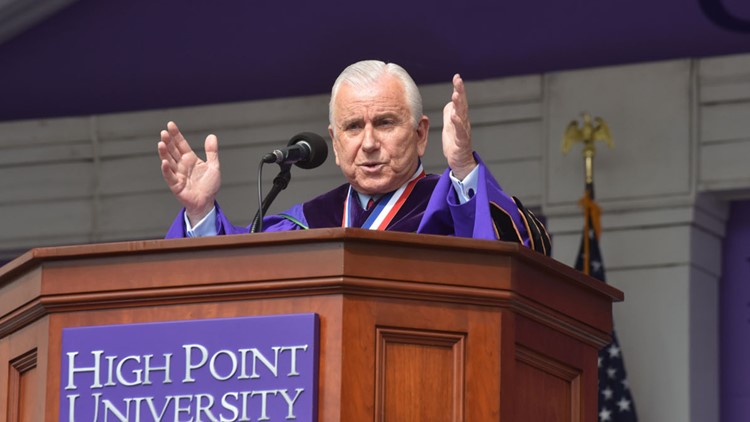 Faculty, Staff at High Point University to Get Bonuses

Start booking those flights to Hawaii.So said High Point University President Nido Qubein to an audience of more than 650 staff members inside the Pauline Theatre at the Charles E. and Pauline Hayworth Fine Arts Center on campus Tuesday morning.

Qubein encouraged the trips after unveiling a one-time restructuring of the university’s annual bonus dispensation.

“What I am announcing today is the distribution to our employees of High Point University of $5 million,” he said.

Most years, employees are granted a bonus amounting to one percent of the salary earned, he said.

This Thanksgiving, celebrating his 15 years at the university and all the changes that have taken place in that time, each employee will receive a bonus of 1 percent of his or her salary multiplied by the number of years served.

Stephanie Crofton serves as vice president of experiential learning and career development at HPU. She began her career at the university 19 years ago as an assistant professor of economics. She was as surprised as anyone at Tuesday's announcement.

"It is such a big morale booster," Crofton said.

Many other colleges and universities are having to cut jobs and slash programs, she said. Not so at High Point University.

"This is such a great motivator ... and feeling of vibrancy and positivity. And I think that is great not only for High Point University but for the city of High Point and really the whole Triad," Crofton said.

She said she hopes other Triad employers take notice of the example.

The money was set inside for the sole purpose of doling it out across the more than 1,900 faculty and staff members at the university.

Qubein said the institution could afford to do so because of its mission to be “prudently frugal and selectively extravagant.”

Campus security officer Jeffrey Thomas has been at his post 10 years. After retiring from the military, Thomas found a similar work environment at HPU, one where everyone looks out for each other and where being a sense of family in the workplace rings true, he said.

"First of all, this is a very humbling experience and one that sets High Point University apart," Thomas said. "With everything going on around the world and everything, especially in my department, it lets you know that when you work hard, you come in and you are dedicated, it doesn't go unnoticed."

In the 15 years since Qubein first arrived, student enrollment is up from more than a thousand students to this year’s record-setting 5,400 students.

The face of the campus has changed along with its culture. New construction, amenities and programs mark the tenure, not only of Qubein but of the staff who’ve helped him guide the ship along the way.

“”I’ll be honest with you. We didn’t listen to people who didn’t want us to change,” he said.

Some scoffed at the addition of flags on the quad or the placement of a fountain in a certain area on campus. The administration forged ahead.

“Remember, for the timid, change is frightening. For the comfortable, change is threatening. But for the confident, change is opportunity.”

Other Triad Business Journal stories to check out:

TBJ: NC gets a 'C' grade in manufacturing, and logistics, study says