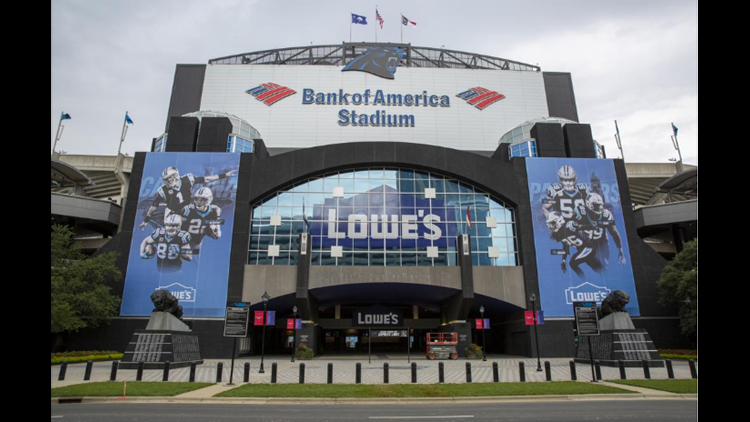 Photo by: Lowe's Cos. Inc.
Lowe's logos can be seen on the Carolina Panthers' home stadium as part of an expanded partnership between the home-improvement retailer and the NFL franchise.

CHARLOTTE, N.C. — An expanded sponsorship of the Carolina Panthers by Mooresville-based home improvement retailer Lowe’s Cos. Inc. will include adding team merchandise to company stores and working with players on community projects this season and beyond.

Lowe’s (NYSE: LOW) is spotlighting the Panthers, Dallas Cowboys and Philadelphia Eagles while also continuing to roll out an official NFL sponsorship signed with the league in January. This month, Lowe’s affixed its logo above the east entrance at Bank of America Stadium as part of a literal sign of how its Panthers partnership is growing.

“(It’s an opportunity to) just really demonstrate that Lowe’s and the Carolina Panthers (have a lot of) synergies since we’re both large Carolina companies,” Bill Boltz, Lowe’s executive vice president of merchandising, told CBJ of the new sponsorship elements. “Big opportunity for us, so we’re excited about it.”

In a prepared statement, Panthers president Tom Glick said, “For years, Lowe’s has been a fixture in the Carolinas as the preeminent source for home improvement and one of our great teammates. Our work with Lowe’s has allowed us to deliver many special moments and experiences for our wonderful fans. We are excited to enter into this expanded partnership with Lowe’s which will bring more benefits to Panthers’ fans across the region.”

In its stores and on its website, Lowe’s will now carry thousands of NFL-licensed products, including chairs, canopies, grills, coolers and flags. A do-it-yourself tailgating theme — “homegating” — includes a Panthers-themed makeover of a fan’s house that will air on the Lowe’s YouTube channel Aug. 24.

Boltz said Lowe’s will also be the sponsor of pre-game street festivals outside BofA Stadium before home games. The first two home games will include Lowe’s workshop demonstrations aimed at children as part of the fan festival.

Lowe’s signed on as the Panthers’ training camp sponsor at Wofford College in 2015, but training camp is not part of the new agreement taking effect this season, Boltz said.

Neither the company nor the team disclosed financial terms of the multiyear agreement, though Lowe’s will now rank among the Panthers’ largest sponsors.

Bank of America Corp. (NYSE: BAC), with naming rights to the NFL stadium, has been the team’s top-paying corporate partner at $7 million annually.

BofA’s naming-rights agreement ends after the 2023 season. The Panthers are certain to command a dramatic increase in naming fees next time around, particularly if the team builds a retractable-roof domed stadium, as owner David Tepper hopes. Discount airline Allegiant recently put its name on the $1.9 billion stadium opening next year in Las Vegas for the Raiders. The Las Vegas Review-Journal estimated the airline is paying $20 million to $30 million per year for the naming rights.

For more stories from the Triad Business Journal click here.