From diet pills to teeth whiteners to beauty creams, fake free trial offers are costing millions of Americans, to the tune of more than $1 billion. 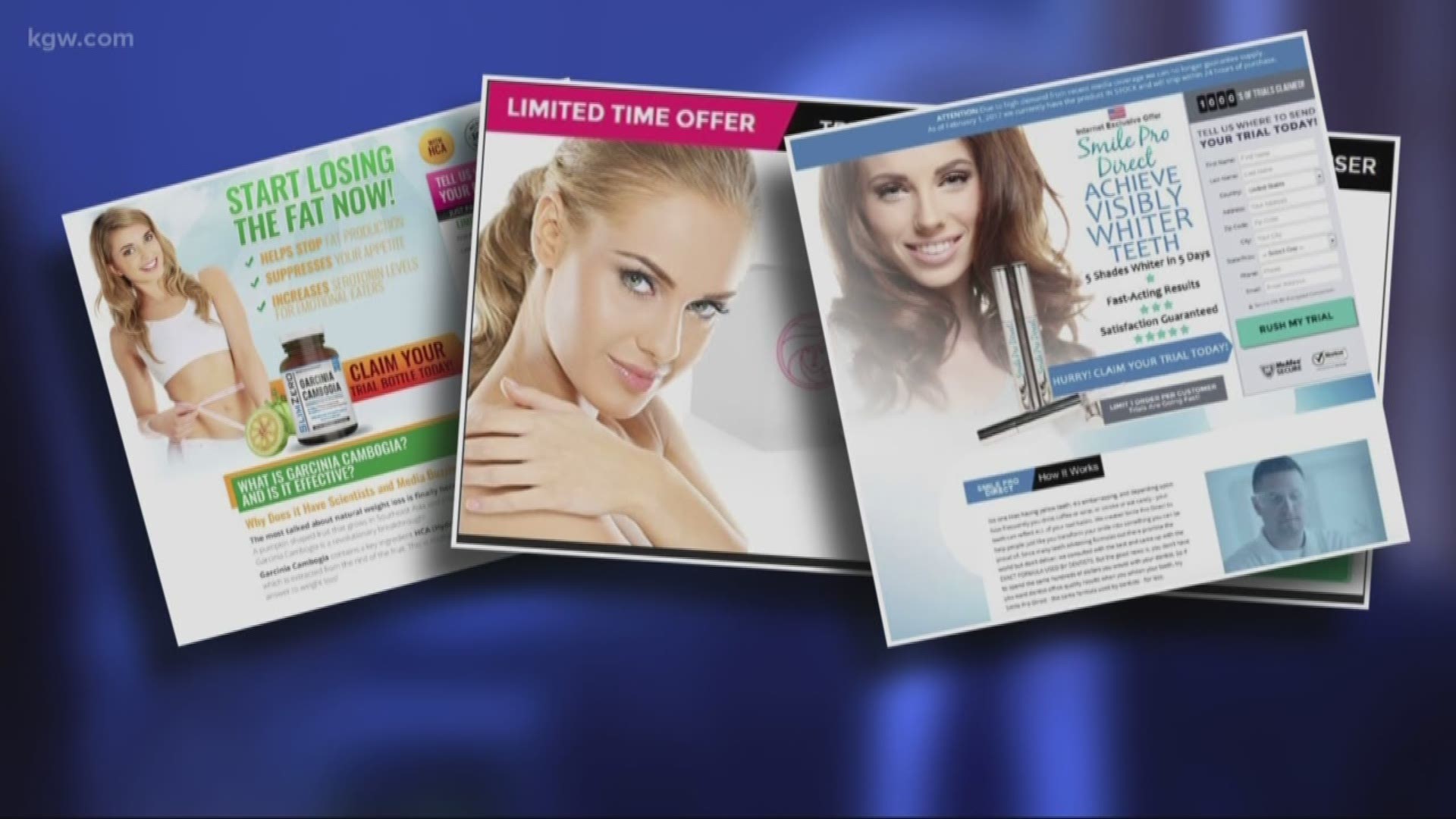 From diet pills to teeth whiteners to beauty creams, fake free trial offers are costing millions of Americans, to the tune of more than $1 billion.

A new study by the Better Business Bureau shows free trial complaints to the FTC have doubled over the last two years.

Consumer advocates say if you sign up for one, you could be stuck paying hundreds of dollars.

Ann Tripp thought she had nothing to lose by signing up for a free trial of Instantly Vivid moisturizer except maybe a few wrinkles.

“I was hoping it would take away my bags,” said Tripp.

She paid $4.95 for shipping and the product arrived a few weeks later.

“It didn't feel like anything special and I didn't start looking younger quickly,” said Tripp.

Then a second bottle came.

Tripp checked her statement and saw the company had billed her $89 per bottle. When she called the company, she was told she signed up for a monthly subscription.

“They were fairly rude. They kept saying you signed a contract for this,” said Tripp.

At first, Tripp’s bank removed one of the charges, but the beauty cream company fought back, saying Tripp knowingly signed up.

Credit: BBB
BBB study finds that one million people have lost over a billion dollars in free trial scams

The print on the on-line form explaining the terms is so small Ann had to use a magnifying glass to read it.

“I'm sure there are many people like me,” said Tripp.

According to a new study by the Better Business Bureau, more than 37,000 people have complained about free trial offers over the last three years.

One million consumers involved in the 14 cases resolved by the FTC have lost more than $1.3 billion.

“The problem is not that their free. The problem is that they are a trap for repeated payments,” said Chuck Harwood with the Federal Trade Commission.

Harwood said affiliate marketers push these free trial ads using fake celebrity endorsements and the companies behind the products make it difficult to even find them.

“The companies work hard to conceal where they are located. They may change their names. They really don't want you to cancel,” said Harwood.

The FTC recently took action against a company called Apex Capital Group, LLC for allegedly using free trials to trick consumers into subscriptions and setting up shell companies to process millions of dollars in payments.

“The goal was to make it even harder for consumers to cancel by using different names than consumers thought they were dealing with,” said Harwood.

While Apex was ordered by a judge to stop doing business as these allegations head to court, a quick check on-line or on any social media site and you'll find the free trial business is booming.

Tripp hopes you take her story as a warning. Her free trial cost $350.

If you are a victim of a free trial scam, the BBB recommends:

Have something you want us to look into? Call Cristin! You can reach her at callcristin@kgw.com or call the KGW investigates tipline at 503-226-5041