Hundreds of protesters rallied around the Silent Sam statue Tuesday night on Chapel Hill’s campus demanding for it to be removed. 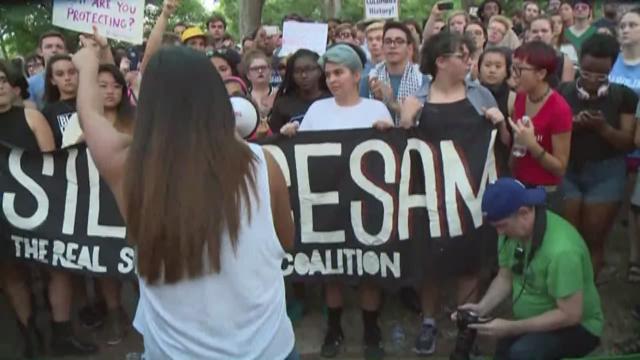 CHAPEL HILL, N.C. -- Hundreds of protesters rallied around the Silent Sam statue Tuesday night on Chapel Hill’s campus demanding for it to be removed.

Protesters vowed this will be the last semester the Silent Sam statue will be on campus.

The majority of the protesters view "Silent Sam" as a symbol of hate. However, some supporters of the statue did show up but their voices were mostly drowned out by other protesters.

Police put up a barricade around the monument to protect it during the protest.
Protesters chanted for hours while holding up signs, demanding for the monument to be removed.

Protesters marched in the street before ending with a sit-in at the monument.

Hundreds of protesters and students take to the streets to protest Silent Sam - want this to be his last semester on @UNC campus @WFMY pic.twitter.com/TubGiS29g6

The UNC system said it believes moving the statue is in the best interest of the safety of students, but moving Silent Sam depends on the laws.The school is now trying to figuring out if it's legal to take it down.

Police made two arrests at the protest.