Monday marks the 14th anniversary of the murders of Michael, Mary and Jennifer Short. 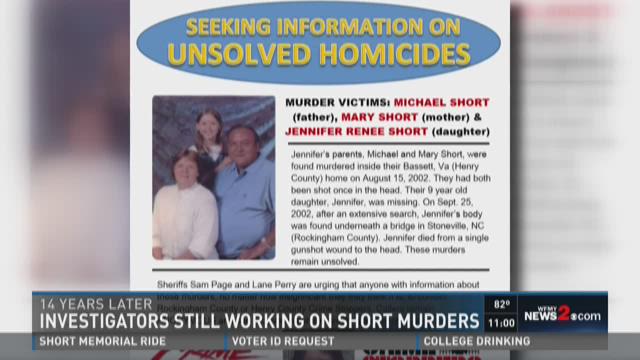 Monday marks the 14th years since the Short family murders, which remain unsolved.

On Aug. 15, 2002, Michael and Mary Short were murdered at their home in Bassett, Va., just north of Martinsville. The couple were both shot once in the head.

The Shorts' nine-year-old daughter, Jennifer, went missing at the time of the murders. Jennifer was eventually found dead underneath a bridge in Stoneville, N.C., a month later. The daughter had also been shot in the head.

"We just need that piece of the puzzle," explains Sheriff Sam Page. "That information."

But still no answers.

"We've heard every rumor you could think up on why or who but no one knows for sure," says Ray Reynolds, who lived across the street from the short family when this happened.

The bridge on Grogan Road where Jennifer was found was renamed in her honor.

It's still marked with tokens of tribute.

Sheriff Page thinks someone in the area knows something - and needs them to come forward.

The community isn't giving up either.

"I tried to keep my composure but it hurts so bad to know someone did that to a child," Reynolds shares.

He channels his frustration into a remembrance ride for Jennifer and her family every year - called Jennifer's ride.

The money goes toward a scholarship in Jennifer's name.

It's a way to make sure the Short family is never forgotten.

"They call this a cold case," Reynolds says. "It's not a cold case to this community."