Hundreds gathered for a prayer rally spearheaded by notable civil rights and faith leaders in Brunswick, Georgia on Thursday. 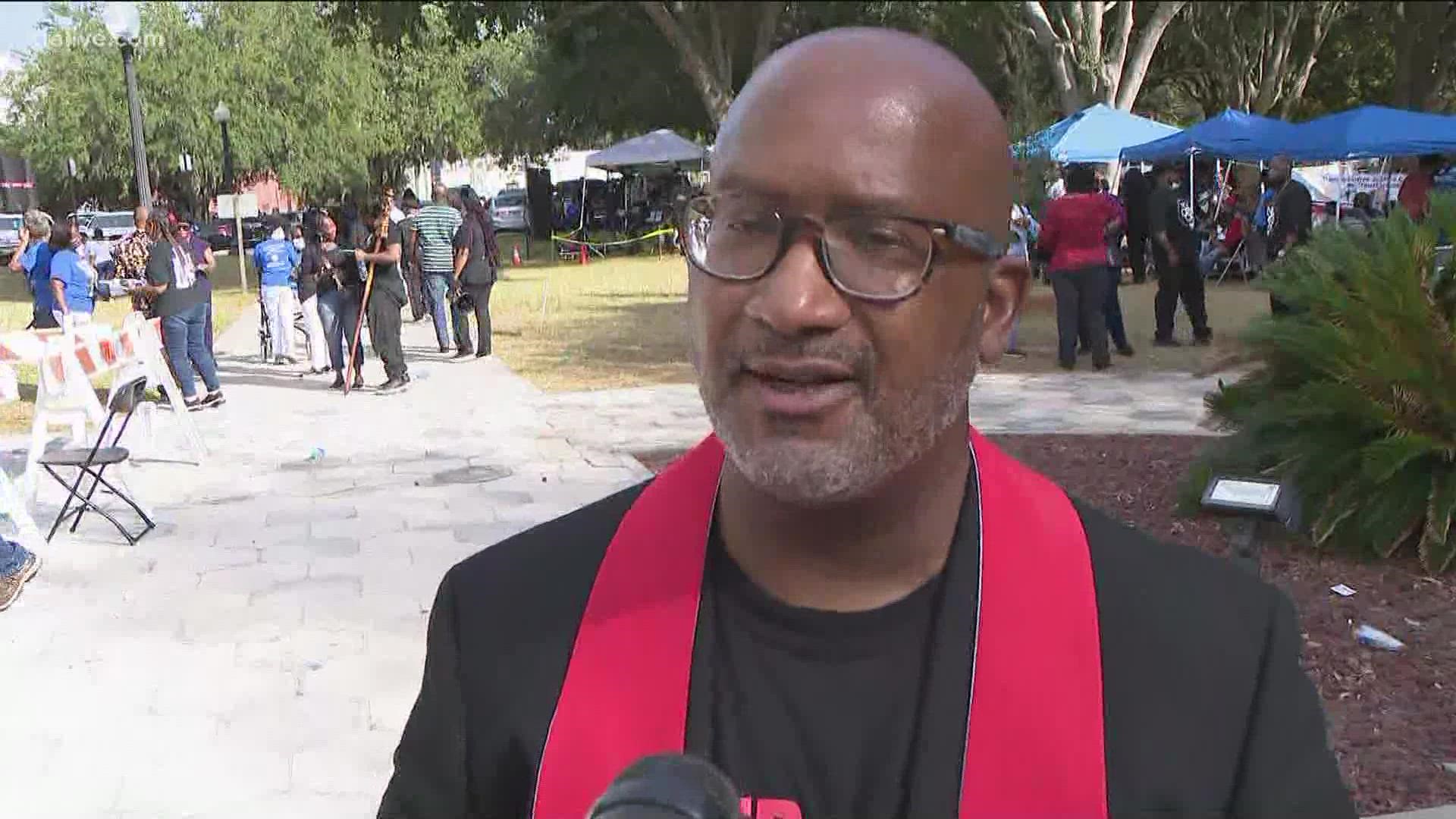 BRUNSWICK, Ga. — Hundreds gathered in Brunswick, Georgia on Thursday, just miles away from Satilla Shores - the neighborhood where Ahmaud Arbery was shot and killed. The scores of people appeared just outside of the Glynn County courthouse, where day 10 of the trial over the death of Arbery was underway.

The chant "Justice for Ahmaud" could be heard across the courtyard as civil rights advocate Al Sharpton approached the podium, kicking off the rally's press conference. Arbery's parents spoke to the crowd directly, offering brief words as they shed some light on the grief they feel for their dead son.

"When Ahmaud was killed on the 23rd of February, the family had some of the darkest times of our lives. We asked questions. We got no answers. We submitted emails with no reply back," Arbery's mother Wanda Cooper-Jones said.

"Thank you to all of you people that came out here to support this family." Ahmaud Arbery's father Marcus Arbery continued.

Arbery said the defendants were wrong for shooting his son and said, "But, look at the change he brought. He brought a change with his life."

"You all tore my family up. You all tore us up. But, look what you did to your own. You tore yours up too. Because guess what? If you had a heart, you would have let him kept running." Marcus Arbery continued.

"While I may not be a preacher, there is a ministry that exists. Part of that ministry is whenever you see injustice, you must stand up. Dad used to say 'Injustice anywhere is a threat to justice everywhere.'" Martin Luther King III said, bringing the crowd to a slow-rolling roar.

There were many more speeches still to come.

Atlanta's New Birth Missionary Baptist Church pastor Jamal Bryant spearheaded the rally, having asked for Black pastors to gather in Brunswick to pray for the family of Ahmaud Arbery. But, things first began in Brunswick's courtroom.

William Bryan's attorney Kevin Gough received criticism for a comment made last week during the trial of Ahmaud Arbery's death. After Rev. Jesse Jackson's brief appearance, the attorney claimed he did not want "any more Black pastors" to show up in the courtroom.

Rev. Jesse Jackson, Martin Luther King III and Jamal Bryant are just some of the civil rights activists and faith leaders that beckoned for hundreds to appear at the Glynn County court's steps in response.

Jackson continued to join Arbery's family in the court room despite the comments from Bryan's defense.

On Feb. 23, 2020, Arbery was shot and killed while running through the Satilla Shores neighborhood in Glynn County near Brunswick. Arbery was shot and killed by father and son Gregory McMichael and Travis McMichael, who claimed they were attempting a citizen's arrest at the time. Both the father and son, as well as their neighbor William "Roddie" Bryan, have since been charged.

The trial in the death of Ahmaud Arbery continues, having sparked national attention in near countless forms since Arbery's death became widely known. The rally of Black pastors outside of the Glynn County courthouse steps is the latest in a long list of community responses.