Joshua Hunsucker is accused of killing his wife, Stacy Robinson Hunsucker, by poisoning her with eye drops. 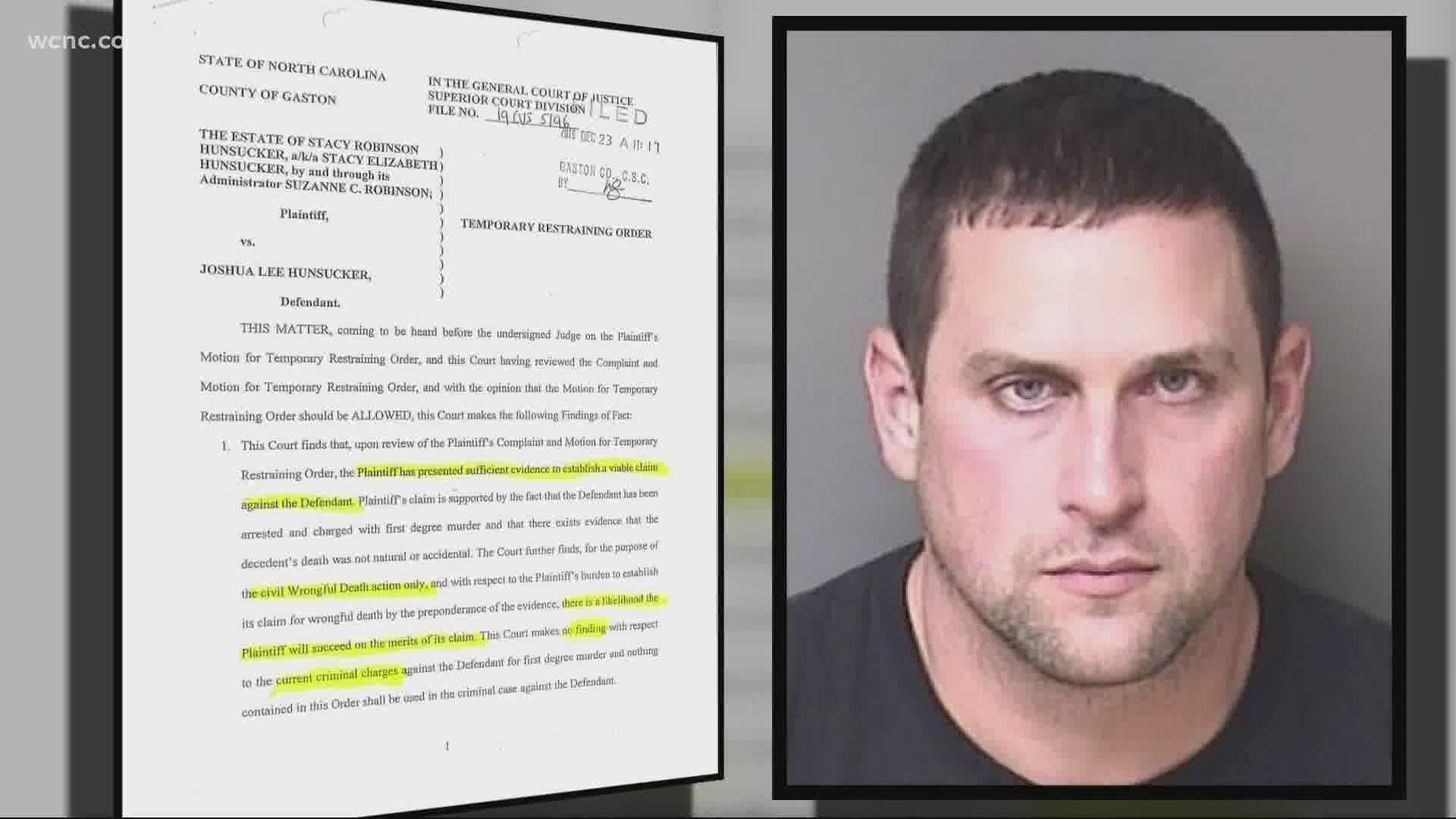 GASTONIA, N.C. — Court documents reveal new details in the case of a Gaston County-based flight paramedic who's accused of murdering his wife by poisoning her with eye drops.

Joshua Hunsucker remains out on bond as a criminal case and a wrongful death lawsuit against him move forward in the court system.

Court documents obtained this week by WCNC Charlotte provide previously unreported details on the case, including possible workplace complaints against Hunsucker and how attorneys believe Hunsucker got his wife, Stacy Robinson Hunsucker, to ingest deadly amounts of tetrahydrozoline, the main ingredient in eye drops.

Detectives said Hunsucker was inspired by the arrest of a York County woman in September 2018, who eventually pleaded guilty to poisoning her husband with eye drops.

Court documents alleged that within days of learning about the South Carolina case, Hunsucker surreptitiously placed eye drops in his wife's water and exposed her to deadly amounts of tetrahydrozoline over an unspecified period of time.

Tomorrow marks 32 weeks since Joshua Hunsucker was arrested and accused of killing his wife by poisoning her with eye drops. Today on @wcnc, I’m taking a look at the case’s progress, including new details in court documents. pic.twitter.com/u6dccxfqlw

Investigators said after his wife's death, Hunsucker refused to have an autopsy performed and quickly had her remains cremated.

The Robinson family said they only discovered Stacy Robinson Hunsucker may have been poisoned because she was an organ donor, and a donation center still had a sample of her blood.

Court documents revealed for the first time the medical examiner's office officially changed Robinson Hunsucker's cause of death from a heart attack to homicide.

The Robinson family's attorneys subpoenaed several of Hunsucker's family members and Atrium Health, where Hunsucker worked as a flight paramedic.

Court records filed by the Robinson family's attorneys indicated they received documents from Atrium Health, which referenced complaints and disciplinary actions against Hunsucker.

The family's attorneys said Hunsucker's family members haven't been served with the subpoenas because the Gaston County Sheriff's Office said they were "avoiding service."

Hunsucker's attorney, David Teddy, wouldn't comment on-camera about specific evidence in the case though during a hearing back in December, he hinted at a long fight ahead.

"We anticipate that this case will be strenuously opposed," Teddy said.

Despite the pandemic, Teddy said Thursday he doesn't expect any delays in his client's criminal case this year because it's still in the early stages.

He added he recently got a large batch of evidence to go through as part of the discovery process.

The civil case has been proceeding with attorneys meeting for a court hearing just in the last week.

Jordan Green, the special prosecutor in the case, declined to comment.

No new criminal or civil court hearings have been scheduled yet.

Get the biggest headlines delivered right to your inbox. Sign up for the Wake Up Charlotte newsletter