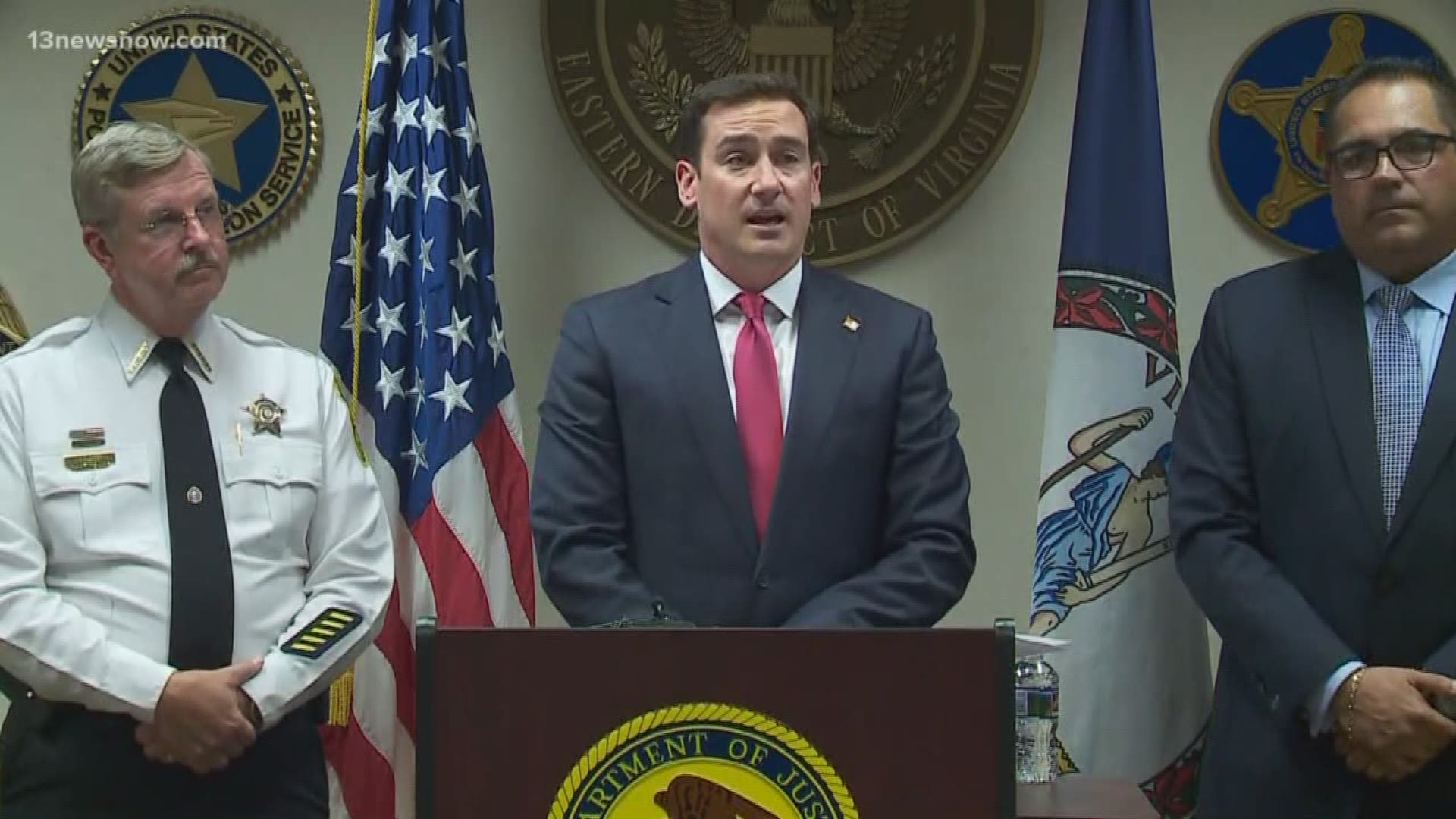 NEWPORT NEWS, Va. — In three days, 35 people were arrested in a massive operation in Virginia, North Carolina, and Texas.

The 35 people have been arrested for their roles to distribute and possess with intent to distribute large amounts of heroin, fentanyl, and cocaine base in Hampton Roads. Four people are still fugitives.

The 106 charges given out to the offenders during the bust includes conspiracy to distribute and possess with intent to distribute cocaine, heroin, cocaine base, and fentanyl; conspiracy to launder money; felon in possession of a firearm; maintaining a drug-involved premises; use of a communication facility in furtherance of drug trafficking; interstate travel in aid of racketeering enterprises; and illegal re-entry by a previously deported or removed alien.

“This massive interdiction of narcotics, which included enough fentanyl to kill over 14 million people, is proof positive of the power and strength of federal, state, and local law enforcement collaboration,” said G. Zachary Terwilliger, U.S. Attorney for the Eastern District of Virginia. “The 39 charged defendants are just that—charged—and remain innocent unless and until proven otherwise. This operation, through its seizure of scores of kilograms of illicit narcotics, saved lives in the Eastern District and elsewhere. Any day where we can do that is particularly meaningful and impactful. An incredible thank you to our dedicated law enforcement partners and prosecutors.”

Officials said the large-scale trafficking conspiracy started in March of 2016.

The co-conspirators all had different roles in the drug ring, including supplier, packager, transporter, financier, distributor, and facilitator throughout the life of the alleged drug trafficking ring.

The indictment claims that the defendants and fugitive co-conspirators would purchase and receive narcotics from suppliers in Mexico, California, and New York, and would arrange for heroin, fentanyl, cocaine, and cocaine base to be transported to and within the Eastern District of Virginia. The narcotics used hidden traps in privately owned vehicles, couriers, and semi-trailers, trucks, and recreational vehicles.

Part of the conspiracy included defendants and co-conspirators utilizing various locations throughout Hampton Roads to possess and prepare for distribution heroin, fentanyl, cocaine, and cocaine base, and to meet and discuss previous and future narcotics transactions.

“The DEA will continue to prioritize operations like this one, which target the criminal organizations that bring dangerous drugs and violence into our communities here in Virginia,” said Jesse R. Fong, Special Agent in Charge for the Drug Enforcement Administration’s (DEA) Washington Field Division.

According to the indictment, throughout the life of the drug trafficking ring, the co-conspirators used at least 94 different devices to communicate. It included pre-paid cell phones, Facebook, and encrypted communications apps like FaceTime and WhatsApp to conduct the day-to-day operations, including negotiating prices, and arranging locations for purchasing and selling the drugs.

Some of the co-conspirators changed devices on a regular basis in an effort to thwart law enforcement surveillance. Typically, the cell phone numbers that were used were in pre-paid cell phones that did not need a subscriber’s name.