'Fred should not be dead' was the rallying cry at a march in High Point Friday afternoon. 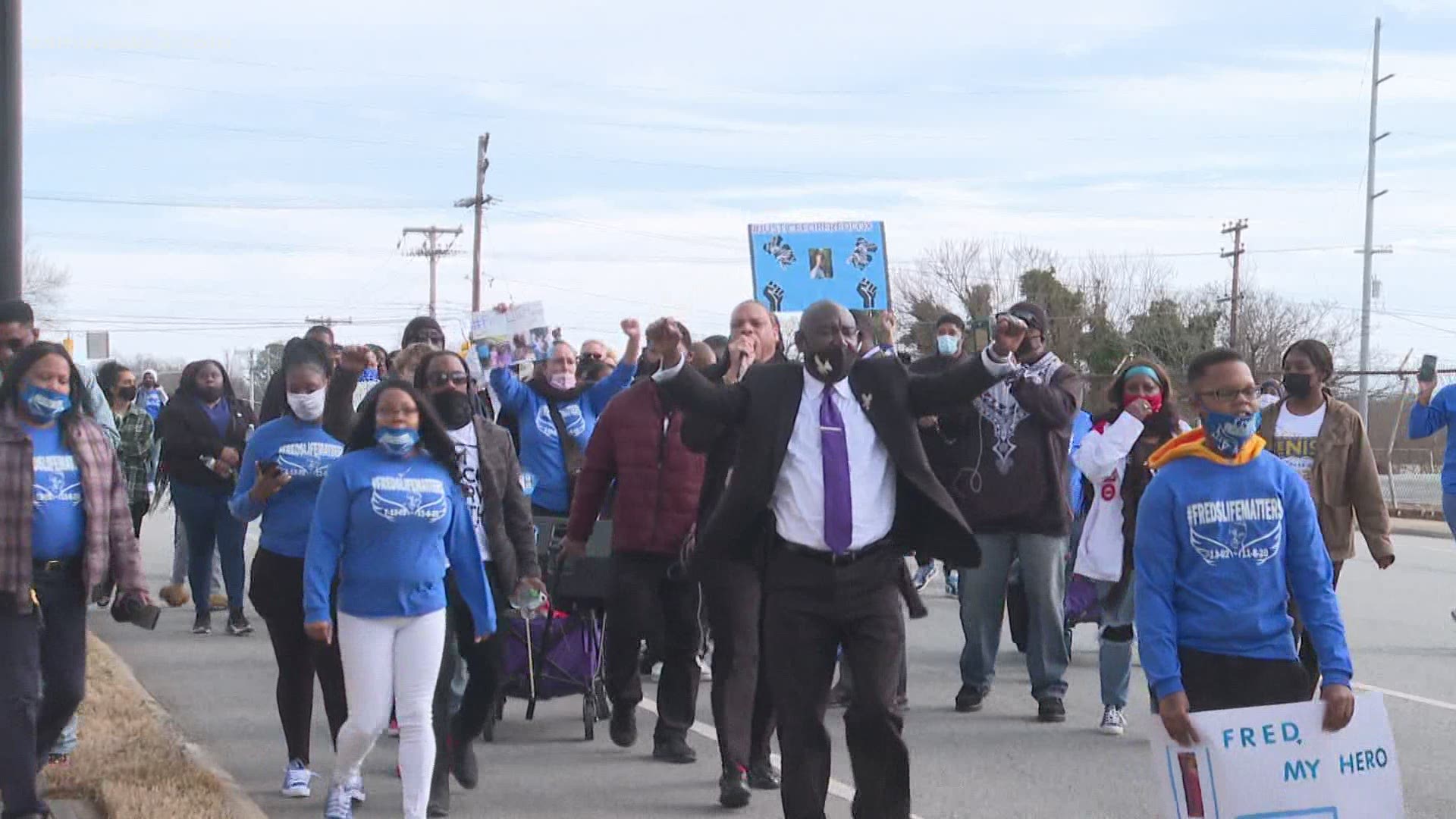 During an organized march to the High Point Guilford County Courthouse, family, friends, and lawyers chanted "Fred shouldn't be dead!"

"My only baby, he took my only baby," Frederick Cox's mom cried out at a news conference outside of Living Water Baptist Church Friday afternoon.

High Point Police said Cox, 18, was shot by a plain-clothed Davidson County Sheriff's Office deputy following a drive-by shooting at a funeral they were both attending.

An SBI spokesperson said Cox was at the funeral for Jonas Thompson, who investigators said was murdered in October:

The deputy was there at the request of the family and to make contact with potential witnesses in the murder of Jonas Thompson, Jr., that occurred a couple of weeks prior.

Police said there was a drive-by shooting while the funeral attendees were in the parking lot Living Water Baptist Church November 8.

The SBI said a preliminary investigation revealed a plain-clothed Davidson County opened fire after the drive-by and after 'coming into contact with Cox.'

The initial report went on to say the deputy 'observed Cox with a handgun at the time {the deputy} discharged his weapon and other witnesses observed a handgun near Cox after he was shot.' 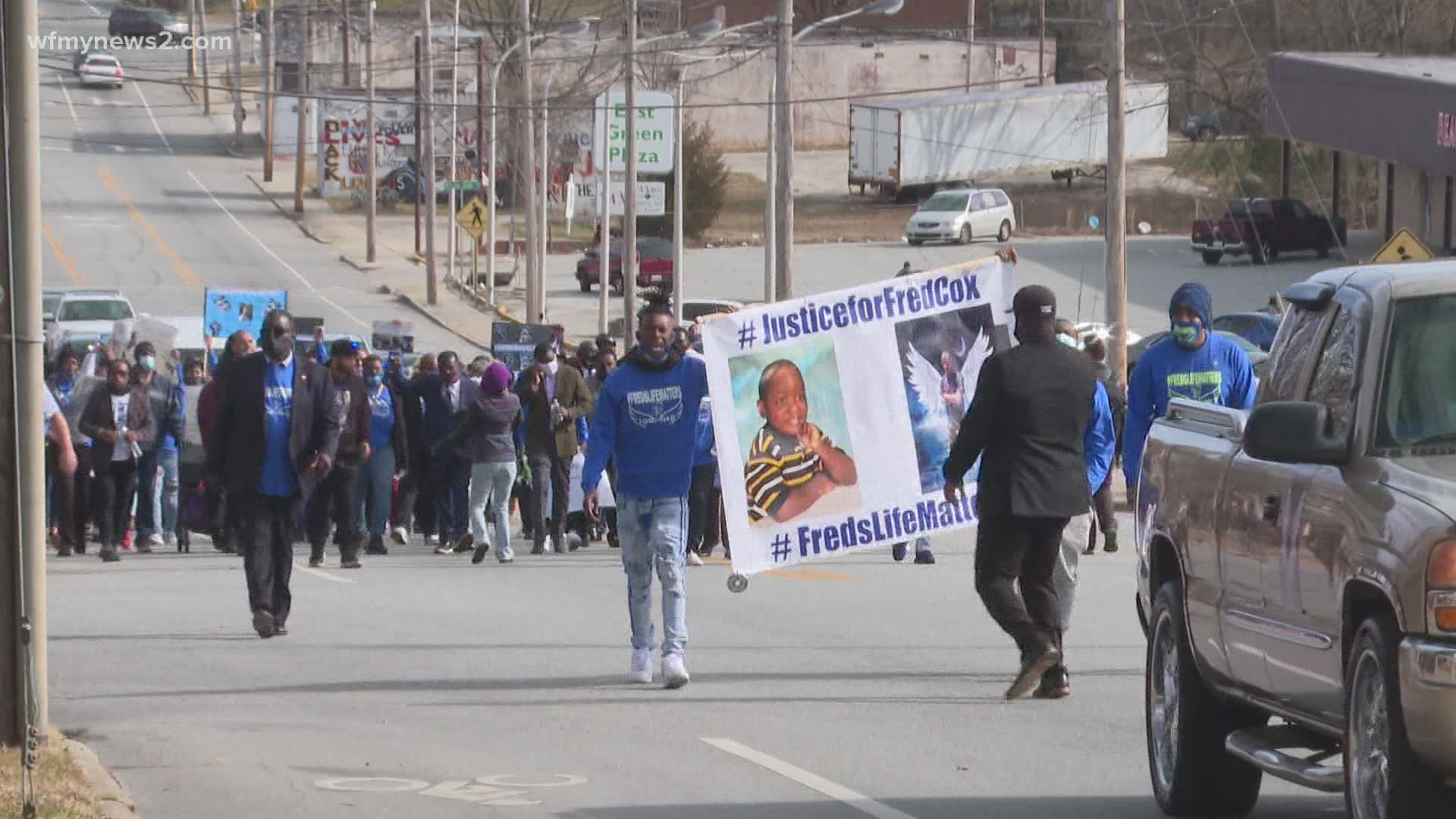 Civil rights attorney Ben Crump, who has represented high profile cases like George Floyd, said that is a false narrative.

"Fred held the door to make sure others got out of harms way and he took the bullets."

Crump said Cox was a hero who died ushering two people inside the church, away from the drive-by gunfire that police believe to be gang-related.

When the witnesses in the SBI report was pointed out, Crump responded:

Crump directed the attention to another witness who spoke at the news conference, 12-year-old Tavaris Johnson Jr.

"I just want to start out by saying thank you," the boy read aloud from his letter to Cox family. "Thank you because your son Fred saved my life. Fred opened the door for me and my mom so we wouldn't get hurt."

"As he's opening the door with his right hand, and pushing them in {the church for safety} with his left, what hand would be holding a gun?" Attorney Allen Rogers questioned. "They're trying to paint the picture like 'there was a gun in the area' it's not about facts."

Friday afternoon, The SBI told WFMY News 2 its investigation into Cox's death is close to complete. Once completed, the agency will submit the case file to the district attorney who will determine what, if any, charges will come about.

At this point, the SBI spokesperson said they are awaiting the autopsy report before the case file is submitted to the DA.

Cox's family wants the name of the deputy to be released. The SBI said for his safety, they have no plans to do so.

The SBI was unable to answer any further questions because the investigation is ongoing.

This is a statement from Davidson County Sheriff Richie Simmons on the Frederick Cox investigation:

“The Davidson County Sheriff’s Office does not investigate cases involving its own deputies. The SBI will do a thorough investigation and turn its findings over to the Guilford County District Attorney’s Office. The Guilford DA’s Office will determine if charges will be brought against the officer.”

When asked about the status of the deputy's employment, Simmons said he couldn't comment because it's a personnel matter.

Cox's mother also responded to allegations that her son was in a gang.

"My son wore red, blue, white and he wore purple," she explained. "That's an allegation that is a lie and they will say anything to make my child something he is not."