One of the more interesting aspects of the investigation will be the use of social media, says one former F.B.I. agent. Many posted online when it happened. 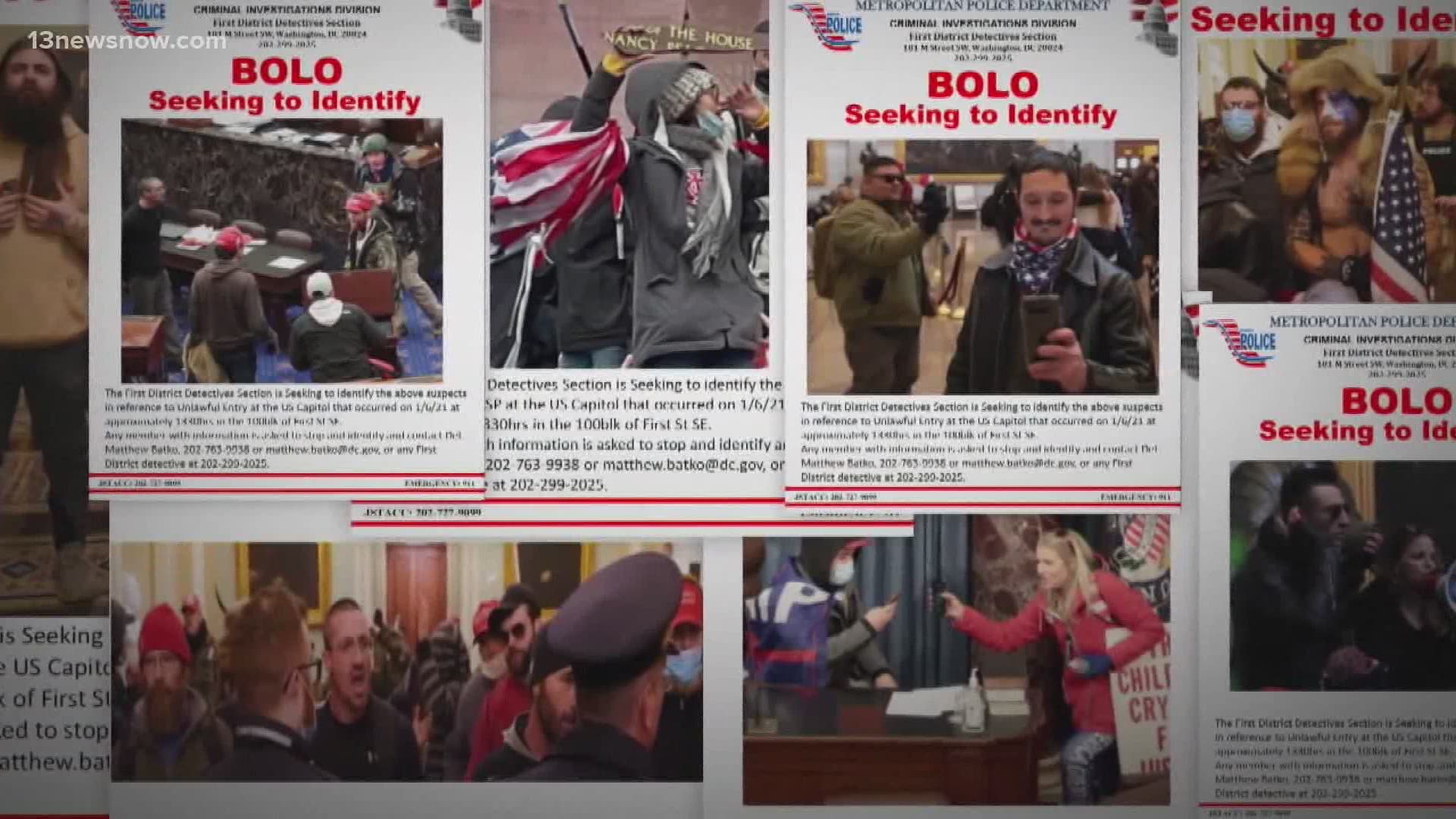 NORFOLK, Va. — On Friday, The FBI reported 13 people charged with federal crimes related to the U.S. Capitol breach earlier in the week, and the investigation is just getting started.

“Let me assure the American people the FBI has deployed our full investigative resources,” he wrote.

Steve Foster, a former FBI agent supervisor, said the agency will form a task force with Metropolitan Police and Capitol Police. The Bureau of Alcohol, Tobacco, Firearms and Explosives and State Police will possibly be included also, said Foster.

“Of course, the order of business is to identify people who have committed federal crimes,” said Foster.

Capitol Police has been criticized for not detaining people caught in the act and allowing violators to go home. But Steven D'Antuono, FBI Washington Field Office Assistant Director in Charge, shared a clear warning for violators Friday.

"Just because you've left the D.C. region, you can still expect a knock on the door if we find out that you were part of criminal activity inside the Capitol," he said.

Foster said the "massive number" of photos and video in the public, including on social media, will help agents identify rioters.

The FBI released photos, including the many shared on social media accounts, to find people of interest. It already helped capture 60-year-old  Richard Barnett of Arkansas. A photo went viral of Barnett placing his feet on the desk of House Speaker Nancy Pelosi. He will appear in federal court on Tuesday, according to the FBI.

Foster said protestors who did not participate in the breach or commit crimes will likely be dragged into the investigation and called to help identify others, especially if they recorded events or were seen on video attending the rally. The FBI will seek witnesses to submit videos and photos.

“They’re going to have to figure out who those people were from the photos and videos, so they are able to charge them,” said Foster.

Foster said FBI agents will need to work diligently to identify rioters and the crimes committed in order to file charges, locate and take those individuals into custody. He predicts limited resources will come into play when considering such a large group of people attending Wednesday’s protest.

1 / 11
FBI
Anyone with information regarding these individuals, or anyone who witnessed any unlawful violent actions at the Capitol or near the area, is asked to contact the FBI's Toll-Free Tipline at 1-800-CALL-FBI (1-800-225-5324) to verbally report tips

ABC News reports former Trump staffers helped organize Wednesday's rally that preceded the attack on the Capitol. Foster does not think anyone in the White House or on Capitol Hill conspired on the breach, but he would not be surprised if federal agents requested information from the President’s staff in the process of the investigation.

“I think that there might be some subpoenas to the White House and the president’s staff because do not forget they helped organize some of this,” said Foster.

The timeline of the investigation will be difficult to predict, but he believes the FBI will allocate appropriate resources. He said the timeline will depend on several factors.

Foster predicts it will take up to two weeks for the first batch of arrests, but the entire investigation will take months.

He said FBI agents could use facial recognition to cross-reference persons of interest, but he said the people would already need to be in a database, which he said collects data from previous court records, arrests, and other sources, like employees in the defense industry or current or former military.

If people deleted the videos of photos from their social media pages, Foster said it won't help them much.

“Once you put something on the internet, you can never get rid of it,” he said. “It’s out there. It’s just a question of finding it.”