Reward up to $10,000 for finding vandal after racist message, bear skin found on parkway sign

The park called the incident "particularly egregious," asking for the public's help to bring a vandal to justice. 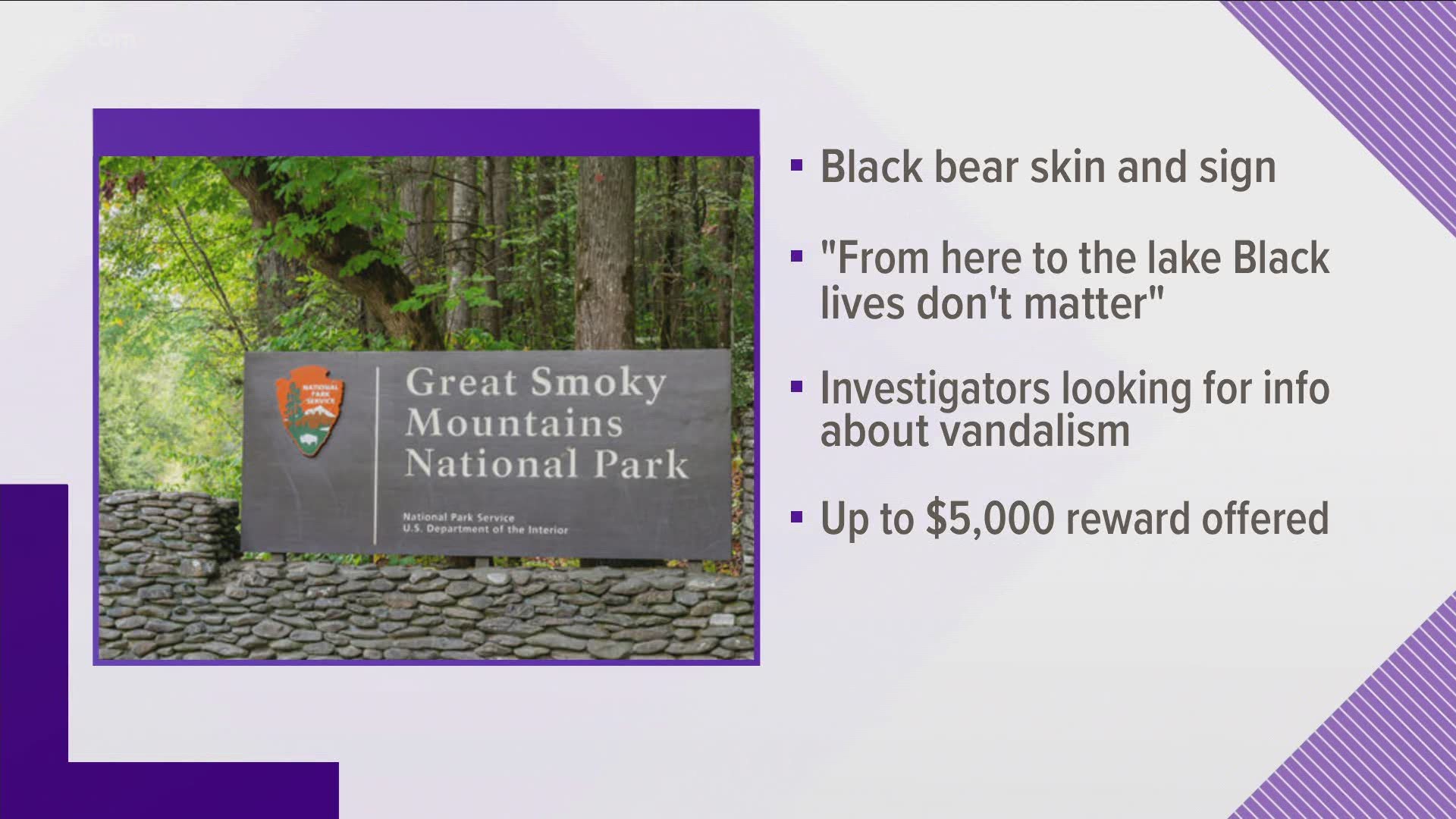 WALLAND, Tenn. — UPDATE (Sept. 30, 2020): A group called "Help Asheville Bears" offered an additional $5,000 for information leading to the arrest of a person who draped a bearskin over a sign with a racist message.

The Great Smoky Mountains National Park is offering a reward to bring a vandal to justice after finding a racist message attached to a Foothills Parkway sign. Next to the message, someone also draped a bear skin over the top of the sign.

According to the GSMNP, the Foothills Parkway West entrance sign near Highway 321 in Walland had been vandalized sometime between Friday and Saturday.

The park said visitors notified them on September 19 around 8 a.m., saying they saw a black bear skin with its head still attached and a cardboard sign taped to the sign that read "from here to the lake black lives don't matter."

WBIR has a copy of the image but has elected not to share it because we do not want to be responsible for spreading its intended message.

The park confirmed the bear skin to be genuine after numerous people spread lies on social media claiming it was artificial.

"I can confirm that the skin is a real, untanned bear skin," GSMNP park official Dana Soehn said. "Determination of when the bear was skinned is a part of the ongoing investigation."

The park is offering up to $5,000 to anyone with information that leads to the vandal's arrest and conviction, saying it is looking for people who may have seen the vandalism taking place.

“We encourage anyone with information to reach out to us as we continue to investigate possible motives for this incident,” said Chief Ranger Lisa Hendy. “We take vandalism incidents seriously in the park, and this particular incident is particularly egregious. It is for this reason we are offering a reward for information.”

There is a tip line for people to give any information they may have about the incident, however park officials said the number is being overloaded with people offering general comments or opinions.

They urge the public to only use the below contact information to provide investigative tips, not commentary.

People with information can contact investigators anonymously in the following ways:

Park officials want to remind people that the tip line is restricted to investigative tips only and should not be used to offer general comments or opinions.