The urge to hurt: Guy Jr. says he's fantasized about gouging out the eyes of fellow inmates 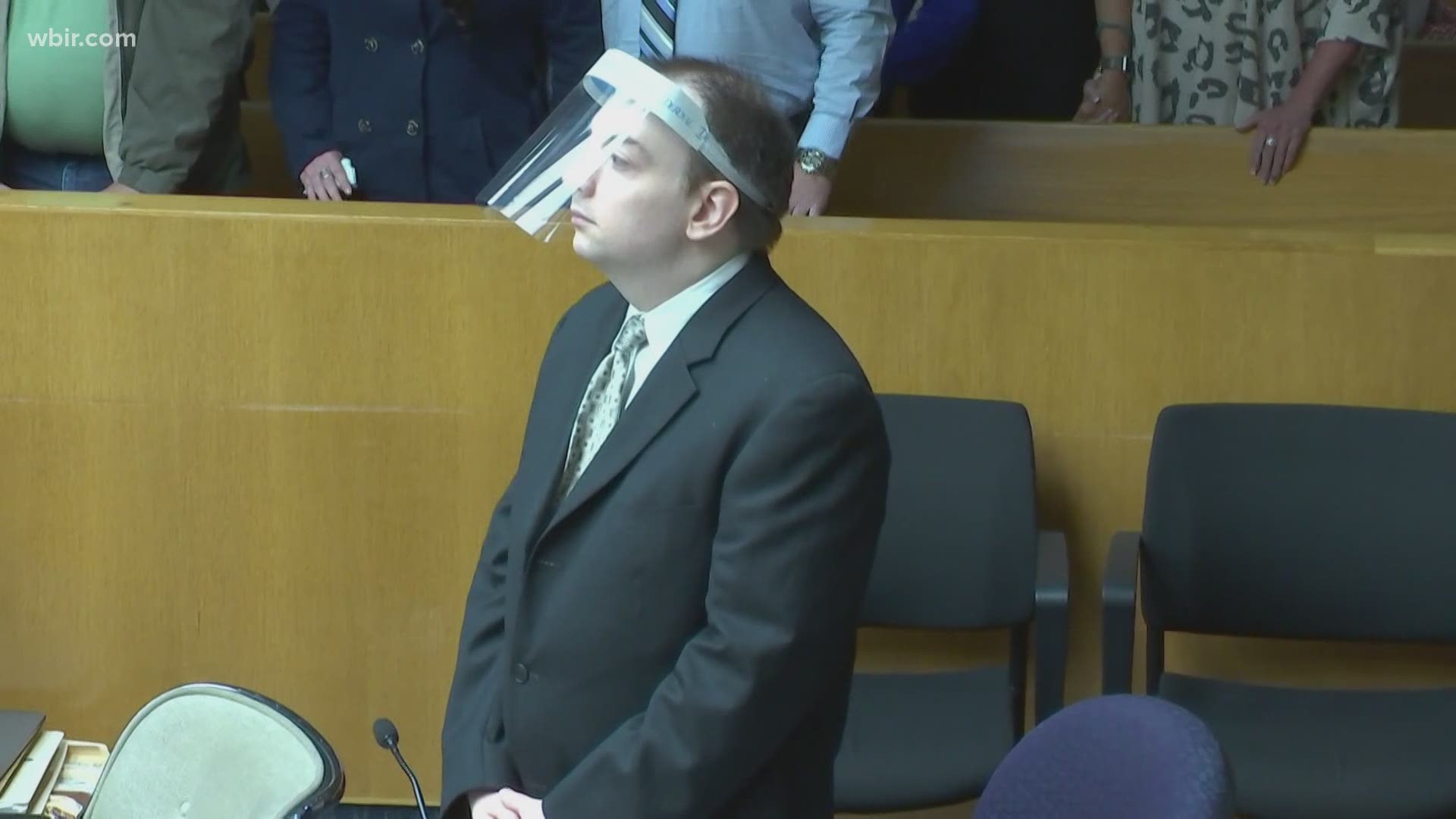 KNOXVILLE, Tennessee — The man who stabbed his Knox County parents to death, cut up their bodies and tried to dissolve the evidence claims he's had fantasies of gouging out the eyes of fellow inmates and could be a threat to the general jail population.

In an Oct. 8 note later collected by authorities, he mentions thoughts of harming one inmate while he slept.

"I'm writing this letter because I don't want to end up with a disciplinary infraction, or worse, more criminal charges, nor do I logically believe that this gentleman deserves to be blind," Joel Guy Jr. wrote, six days after being convicted of murdering his parents and abusing their corpses.

"I don't know what to do. I shouldn't be allowed access to another person while they're unconscious."

The court must decide if he should serve consecutive life terms as well as additional, consecutive time for abusing his parents' corpses, or if that can run concurrent with the life sentences.

Knox County District Attorney General Charme Allen wants the time for the corpse felonies to be served in addition to the murder terms. Guy must serve at least 51 years for each murder term unless Sword decides they can be served at the same time.

Nassios also argues Guy's letter, which she enclosed with the state's motion, is a ploy to get his own jail cell off by himself.

"The fact that the defendant is threatening to harm a cell mate (even if the threat is spurious), is reason for this court to find the defendant continues to be a remorseless, depraved and dangerous offender."

He's tried this tactic before.

This summer, before trial, Guy tried a legal move that would have allowed Sword to impose the death penalty, something the state didn't seek. Guy wrote that he was willing to get the death penalty in order to be alone in prison, the prosecution said.

The maneuver didn't work. Sword said he didn't have the authority to impose death. That's something that's up to the state of Tennessee, he said, and it wasn't seeking to have Guy executed.

"He is in a cell by himself, he has no access to other inmates and has never been with other inmates during his incarceration," KCSO spokeswoman Kimberly Glenn told 10News.

"He has a minimum of 1 hour out of his cell per day. That time is alone without other inmates. He has not had any disciplinary action. He has the same privileges as other inmates, such as access to commissary, tablets and visitation."

Guy's relatives call him a selfish, spoiled "monster". Nassios describes him as greedy and calculating.

Guy lived for years on his own in an apartment in Baton Rouge, La., while sometimes going to classes at Louisiana State University. He relied on the support of his parents, testimony showed.

He didn't work. His mother doted on him.

By Thanksgiving 2016, when Guy was age 28, his parents were ready to cut him off. They planned to sell their house on Goldenview Lane in West Knox County and move to a family home in Hawkins County. They wanted to retire.

Lisa Guy was ready to quit her job, the proceeds of which she'd used to support her only son.

Nassios argues that was a prime motive for Guy to plot the murder of his parents. He wanted their assets, and he hoped to kill them and destroy the evidence by burning down their house.

Guy drove up from Baton Rouge in 2016 for Thanksgiving, staying with his parents in an upstairs bedroom. One of his half-sisters and her sons joined them for a family meal on Thanksgiving.

Credit: State of TN
Part of Joel Guy's Oct. 8 letter warning that he fantasizes about harming other inmates.

Two days later, on Nov. 26, 2016, after plotting for weeks to kill them, Guy attacked first his unsuspecting father in the upstairs exercise room and then his mother when she came back from grocery shopping at Walmart.

Guy stabbed his father at least 42 times and his mother at least 30 times. He then cut away their clothes, put down plastic sheeting and dragged their bodies into the upstairs master bathroom.

He slowly began cutting up their bodies and putting the arms, legs and torsos in matching bins into which he dumped corrosive chemicals such as drain cleaner, testimony showed.

Guy put his father's head face-down into the chemicals. When detectives found the bins, all the flesh from Joel Guy Sr.'s face had been dissolved down to the skull, according to testimony.

Guy also cut off his mother's head and put it in a covered stock pot that he set to cook on the stove.

While still working to dispose of his parents' bodies, he left the house because he'd suffered cuts for which he needed medical treatment. He sought that treatment at LSU.

Detectives found the crime scene on Monday, Nov. 28. Guy was arrested soon after in Louisiana.

1 / 5
Brianna Paciorka/News Sentinel
Joel Michael Guy Jr. enters the courtroom for his trial’s closing arguments in Knox County Criminal Court on Thursday, Oct. 1, 2020. Guy is accused of killing and dismembering his parents in Hardin Valley in 2016.

'HIS EVIL CRUSHED US ALL'

When Guy was convicted, the judge ordered state probation officials to interview him and conduct what's called a pre-sentence investigation. The court uses it while weighing what kind of sentence to impose.

Guy, however, refused Oct. 26 to speak with Autumn Stallings, of the state Department of Correction, when she came to see him in jail.

He just walked away when she tried to explain at the Knox County jail that the visit was part of Sword's order.

Credit: Dept. of Correction
Letter to judge from state Department of Correction detailing how Joel Guy declined an interview.

Three of Guy's relatives have submitted letters asking Sword to make sure he adds prison time for the corpse abuse on top of his life sentences for the killings.

Considering what he's done, they don't ever want to see him get out.

Chandise Fink, Guy's half-sister, wrote in a victim impact statement that she'd received pastoral counseling as a result of what Guy did. She hopes he'll repent some day.

"The lives he took just took a few moments for their pain to be over but the pain that we carry in our hearts will be with us until our Heavenly Father brings us home," Fink wrote. "Joel Jr. didn't just murder daddy and Lisa, he took something from his children, grandchildren, in-laws, siblings, uncles, aunts, cousins, friends and so many more that will never be able to be repaid.

"His evil crushed us all."

Rene Charles, Guy Sr.'s sister, wrote that she'll never be able to "unsee" images from the crime scene in the Guy home.

"I think that they need to change the laws on the death penalty because the nature of this crime should have sentenced him to death," Charles wrote.

She said she, too, has sought pastoral counseling. She wrote that the crimes had created "disharmony" in the extended family, with some wanting her nephew to be executed. 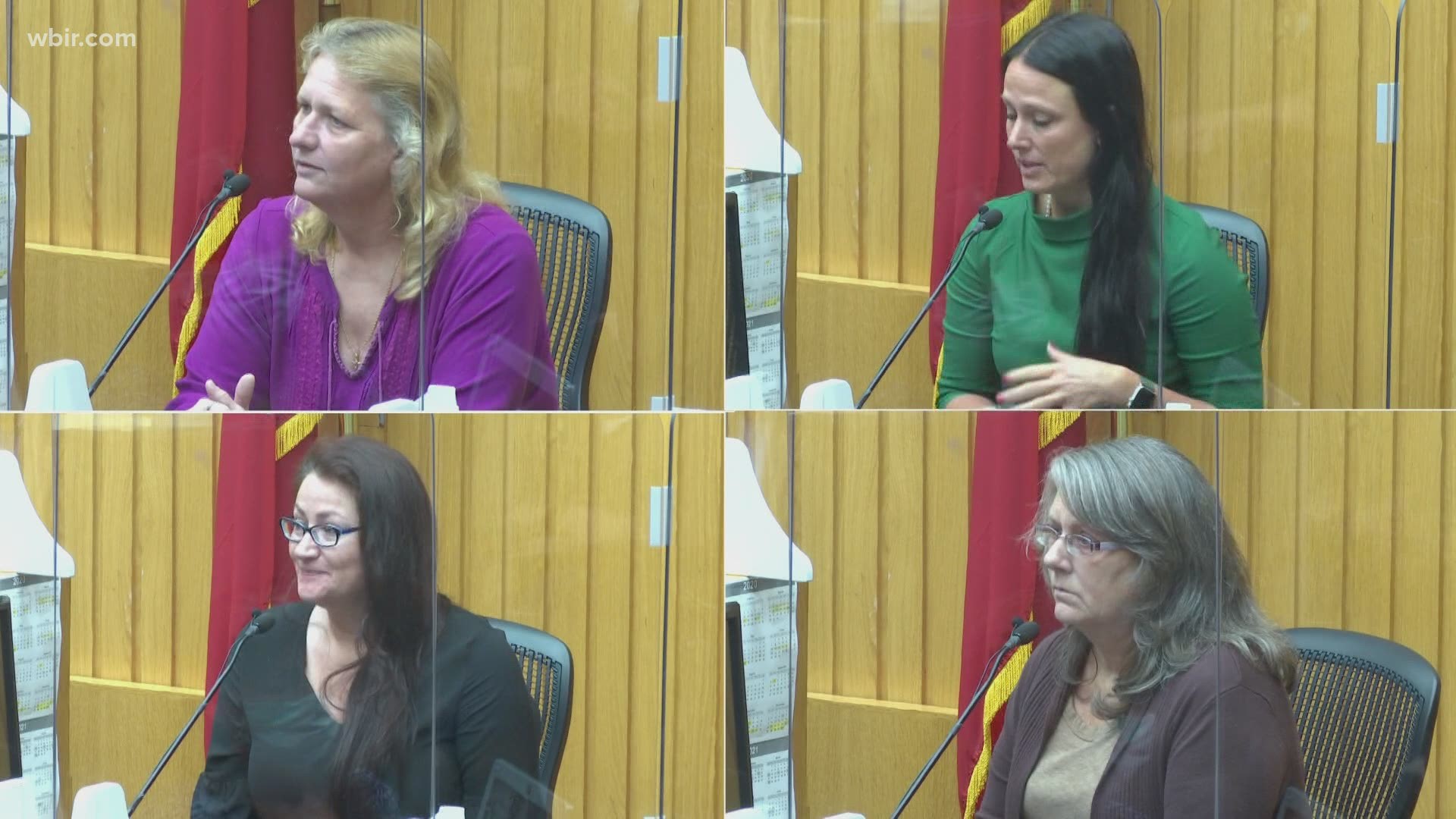 Kinler, however, said she "cannot hate," and thinks Guy is deranged. The nature of his crimes prove as much, she writes. She said she couldn't abandon her nephew, who she said was a loner largely because of past bullying.

"We would prefer all charges to be issued as consecutive and not concurrent," Kinler wrote. "We think he is unstable and should spend the rest of his life in prison.

"Because of his social abnormalities, we would like leniency to allow him solitary confinement. Cohabitation in the general population would be cruel to him."