'We can't really discern the why just yet' | 2 dead, 4 injured after campus shooting

Charlotte-Mecklenburg Police are trying to figure out why a gunman opened fire at UNC Charlotte on Tuesday evening.

Two students were killed and four were hurt during the shooting in a classroom in the Kennedy building, police confirmed.

Police said the students who died at the scene were identified as 19-year-old Ellis Parlier and 21-year-old Riley Howell.

At a news conference Wednesday afternoon, CMPD Chief Kerr Putney called Howell "the first hero" in the response to the tragedy.

"Having no place to run and hide, he fought," Chief Putney said. "When I spoke to the father, one father to another, I told him personally, I wish I had words. What I did tell him is we're committed to the work. We're going to get to the bottom of it."

A student in the class where the shooting happened said students were giving a presentation when the suspect attacked. Pescaro, a sportswriter for The Niner Times, was reportedly out of surgery and recovering early Wednesday morning.

UNC Chancellor Phil Dubois said he visited three students still being treated in the hospital, and one of those victims, Huupt, plans to walk at graduation.

"We're delighted she'll be there to go across the stage," he said.

Dubois added those intending to walk will walk at commencement.

"We'll worry about the details of certifying their degrees later," he said.

A candlelight vigil will be held at 6 p.m. Wednesday in Halton Arena in response to the shooting.

Mayor Vi Lyles said the White House had been in touch and asked what was needed.

"Everyone in this community stands in shock and grief. We know tragedies like this can divide a community or can bring us together. It is our choice of how we move forward," Lyles said.

The lockdown at UNC Charlotte was lifted at 5:20 a.m. Wednesday. The suspect, 22-year-old, Trystan Tyrell was taken into custody Tuesday evening.

"There is absolutely no one else we're looking at," Chief Putney said regarding any other possible suspects.

Terrell was a history major at UNC Charlotte. Sources told NBC Charlotte he dropped out earlier this semester.

NBC Charlotte was on the scene as Terrell was escorted to CMPD headquarters. His first court appearance was scheduled for 1 p.m. Thursday.

According to a police report, Terrell did not know the two people he killed. At Wednesday's news conference, Chief Putney added the handgun was purchased legally by the suspect.

Chief Putney also said Terrell had some familiarity with the building where the shooting took place, but he wasn't able to comment further.

"We can't really discern the 'why' just yet," he said.

UNCC Police Chief Jeff Baker said Terrell was not on their radar at a news conference Tuesday evening.

“This is the worst day in the history of UNCC," Dubois said at a news conference Tuesday evening.

Just before 6:45 p.m., NinerAlerts said that buildings were being swept by law enforcement. An alert sent to students told everyone to "Run, Hide, Fight."

Students on campus were urged to remain in their dorm rooms until the all-clear was given. Students and families were told to meet near the Harris Teeter across the street from UNC Charlotte on University City Boulevard.

At Wednesday's news conference, Chief Putney made a strong statement about how people should respond in a situation like the one on campus Tuesday.

“If you want to close your eyes, hold your breath, and pray, most likely you’re going to die,” he said. “So what we’re telling you is, we want you to do that but that is after, if you have nowhere to hide safely, you take the fight to the person. Take the fight out of the person. And that’s how you save lives.”

UNCC canceled all university activities Tuesday, including a baseball game due to the shooting.

Tuesday was the last day of classes for UNC Charlotte. Final exams were expected to start Thursday. Exams were canceled through Sunday.

On Wednesday evening, UNC Charlotte said all students will have the opportunity to forego an exam and accept their current grade as their final course grade. All exams will be held next week.

RELATED: Who is Trystan Terrell? The UNCC shooting suspect

U.S. Representative Richard Hudson (NC-08) released the following statement on UNC Charlotte: “Renee and I are heartbroken to see this violence in our community and at my alma mater,” said Rep. Hudson. “We are grateful for the quick and selfless action of first responders and police. Our thoughts and prayers are with victims, their families, and the entire 49er community. I will continue to monitor the situation and pray for the safety of all on campus.”

U.S. Representative Alma Adams  (NC-12) responded to the incident in a tweet, saying she was horrified to hear about the shooting.

Governor Roy Cooper tweeted this was a "tragic day for Charlotte and this great university." At 8:49 p.m., Cooper said he was en route to Charlotte.

PHOTOS: At least three shot on UNC Charlotte campus, one suspect in custody 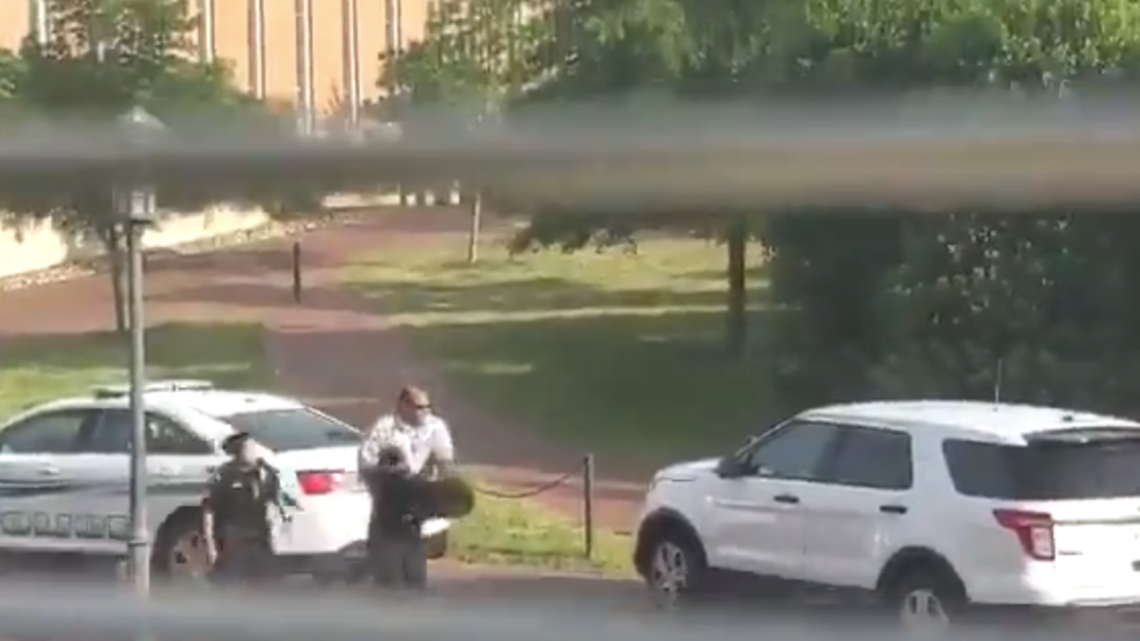 How UNCC Police took down the campus gunman