Why cyberbullying is so hard to fight in North Carolina courts

Cyberbullies, as they're called, are persistent, their comments are often permanent and the signs that someone is being bullied are hard to spot. 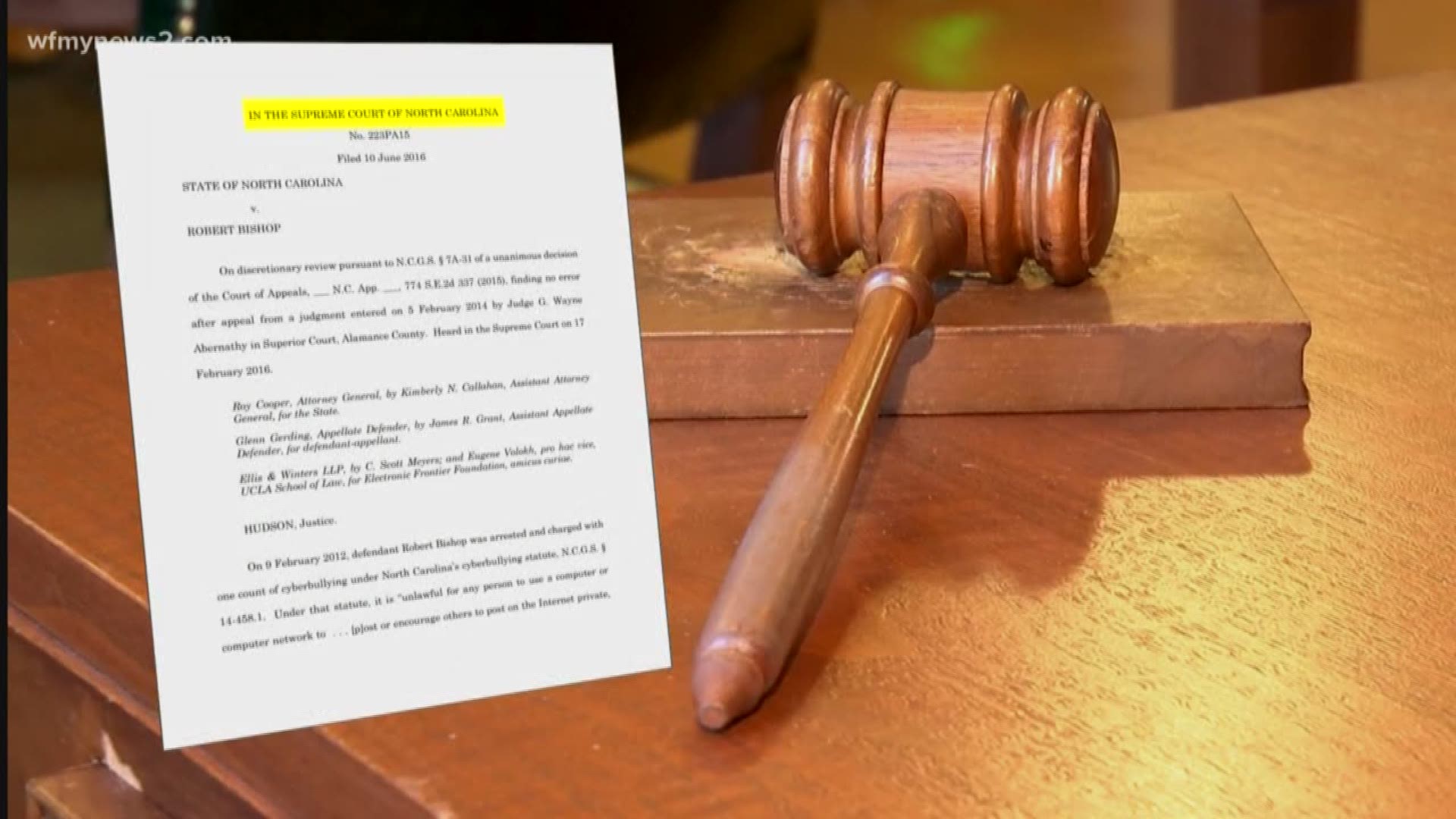 GREENSBORO, N.C. — When you were growing up you could likely escape a bully by going home, these days that is not the case. The internet has made it so bullies can follow you or your child anywhere.

Cyberbullies, as they're called, are persistent, their comments are often permanent and the signs that someone is being bullied are hard to spot. That's why Angela Kelley says it took an outburst for her to notice something was wrong with her son, Dillion Price, back in 2011.

"I heard a lot of commotion in his room and I went in to see what it was and I was going to get onto him for not being in the bed like he was supposed to be," Kelley said. "He was yelling punching the walls throwing pillows I mean he was very very outraged."

That night Kelley took her son's phone and found the cause of his outrage - he was getting nonstop messages, comments and notifications from classmates at Southern Alamance High School.

Court documents show comments like, “I never got to slap him down before Christmas Break,” and, “This is excessively homoerotic in nature,” along with jabs such as,

“I hate Dillion," and even, “Can we just kick his {expletive} already?”

The next morning Kelley went to authorities.

"I ended up taking a big file folder of printed things that it happened and pictures of comments it was unbelievable at the text messages and the messages," she said. "I really did think I was going to come home and find him dead one day and I said something's got to be done."

Five of Dillion’s classmates were charged, convicted and sentenced under NC General Statute 14-458.1, a Cyberbullying and Online Harassment Law. But the case did not stop there.

"It went all the way to Supreme."

One of the defendants, Robert Bishop, appealed the court's decision a few times until 2016. That's when the Supreme Court of North Carolina decided that the law violated the First Amendment.

"The problem the Supreme Court had with the statute on its face what it said – not so much what the students did," Enrique Armijo, an Associate Dean at Elon Law School said. "The way that the statute defined cyberbullying – it didn’t just say harass it also said language intended to annoy and the court said that that language is too broad to kick in and have someone be prosecuted."

The State Supreme Court struck that cyberbullying law from the books. It was replaced with a law that relates to students cyberbullying school employees.

"There is very little protection that anyone else in North Carolina has against cyberbullying," Armijo said.

How hard is it to bring a cyberbullying case to court?

Without a law to specifically address cyberbullying, a person has to be charged with harassment or stalking and that’s a very high bar to meet. When it comes to kids, many times it’s up to schools to address cyberbullying. But what happens when the school bell rings and students can still log on? Are they protected?

What are schools doing?

State Superintendent, Mark Johnson, says it doesn’t matter what time of day it is or if kids are at school.

"If it happens over the weekend and we get the tip and it goes through the proper process it will go to the principal and the school team and they can address that situation at the school just as if it were bullying done at the school during the school day," he said.

Johnson says schools in North Carolina are adopting the "Say Something" App that allows students to anonymously report situations like cyberbullying. Just to be clear, addressing the behavior at school doesn't necessarily mean punishment or consequences and it's up to someone to report the bullying in the first place. Superintendent Johnson is confident that the app will work, and says it's already helped save student's lives in North Carolina.

Kelley doesn't think a slap on the wrist is enough to make a difference.

"I really hope that something is put into place that there’s a law or something that will initially stop this," she said. "If you put yourself in a position to verbally torment someone or to hurt someone and you know that what your intention is and you know that you’re doing wrong you need to be punished to the fullest extent."

She never expected Dillion’s case to go all the way to the highest court in the state or be the reason a law was removed but she doesn’t regret taking action.

"I’m just thankful that my son didn’t hurt himself that was my initial scare you know and that’s why I did what I did."

RELATED: 3 times as many girls as boys report harassment as cyberbullying rises

RELATED: How to stop bullying: Resources for kids, teens, and parents

RELATED: 'This has gone way past a shirt' | Bullied Florida boy's UT shirt spreads message of kindness throughout the world