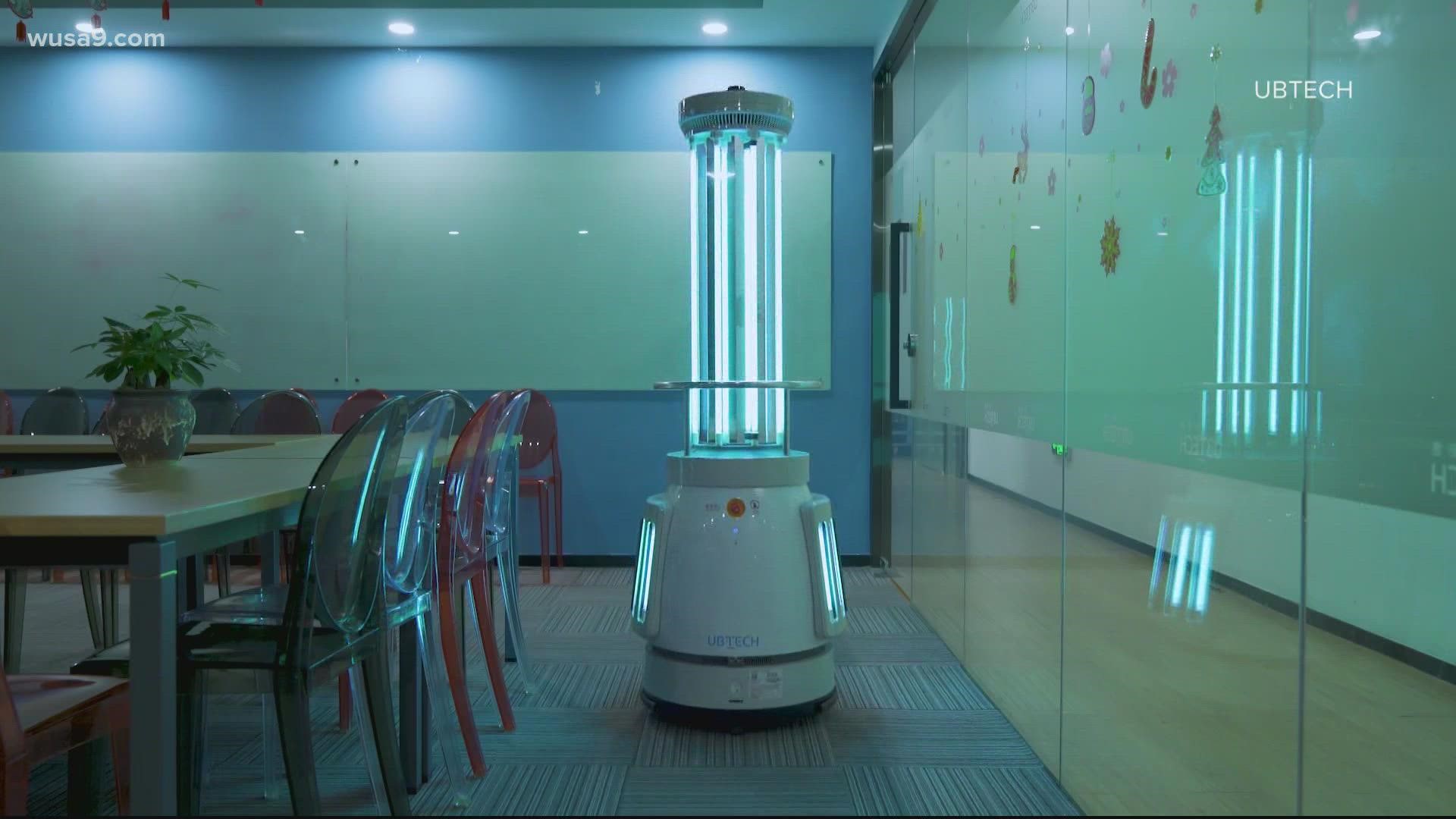 MANASSAS, Va. — As schools report more COVID-19 cases by the day, staff at Manassas City Public Schools are getting creative with cleaning by adding robots.

Created by UBTECH, these robots use UV lights to help disinfect both surfaces and the air.

The maintenance team at MCPS added them to their nightly cleaning routines starting two weeks before school. Now, they have 40 units that each disinfect about 25 rooms a night.

“A lot of things have changed in the last year. And this is one of them, where we are thinking about air quality, so much more than we ever did," said Andy Hawkins, Executive Director of Finance and Operations at MCPS

Hawkins said every night, custodians do their normal cleaning routines and then bring in the robot behind their carts.

"It's the last step they do is they plug in the Adibot, and they turn it on for five, seven minutes, whatever it is, and then whatever that light touches kills all the germs and all the viruses that are in that area," he said.

Maintenance foreman Matt Barton said the robots have a safety cleaning sign with a Bluetooth transmitter on it. The robot will not start working until it's set up, and will immediately stop working if the sign is moved at all.

If someone does manage to get in the path of the UV lights, the robots also come equipped with cameras that will record how long that person is exposed. Then, they can take appropriate safety measures.

Barton said it takes custodians about 15 minutes to clean a room per standard procedure -- more than enough time for the robots to disinfect the area.

"By the time they're done with that, they just walk back to the room they just did, it's already complete, they just unplug it, they roll it to the next room," he said.

As schools work to keep classrooms #COVID19 free, some are now turning to ROBOTS🤖

We're live at @mymcpsva with how staff says they're helping custodians clean better than ever before. @UBTECHRobotics @wusa9 #GetUpDC pic.twitter.com/IhWX3sP0aL

Barton says the robots probably keep the classrooms cleaner than most people's homes.

Hawkins said they're particularly game-changing when a class reports a COVID case, and their team has to go in to disinfect.

“When we were early on into the pandemic, we were told, 'Well, you need to close off that room, wait 24 hours, and you got to bring your staff in to spray it down and clean it down, wipe everything down,'" he said. "Now, within five minutes, we can be back up and running again, easily in those classrooms.”

He and Barton agree that these more thorough cleaning procedures are likely going to be the new standard moving forward.

"Hopefully, you know, we can cut down on student absences or, you know, employee absences or something moving forward, given the fact that, you know, we're, we're disinfecting and cleaning, and it's just becoming the new normal," Barton said.

Hawkins said they paid for the robots with CARES Act funding and other money from the federal government designated to make schools safer.

A spokesperson for UBTECH said they trained Prince George's County Public Schools on how to use the bots this week, and they'll be adding 50 units to their schools.