The road next to Elizabeth Cook's gravesite is riddled with potholes. Some are more than a foot deep. The issue forcing the family to walk 200 yards to visit. 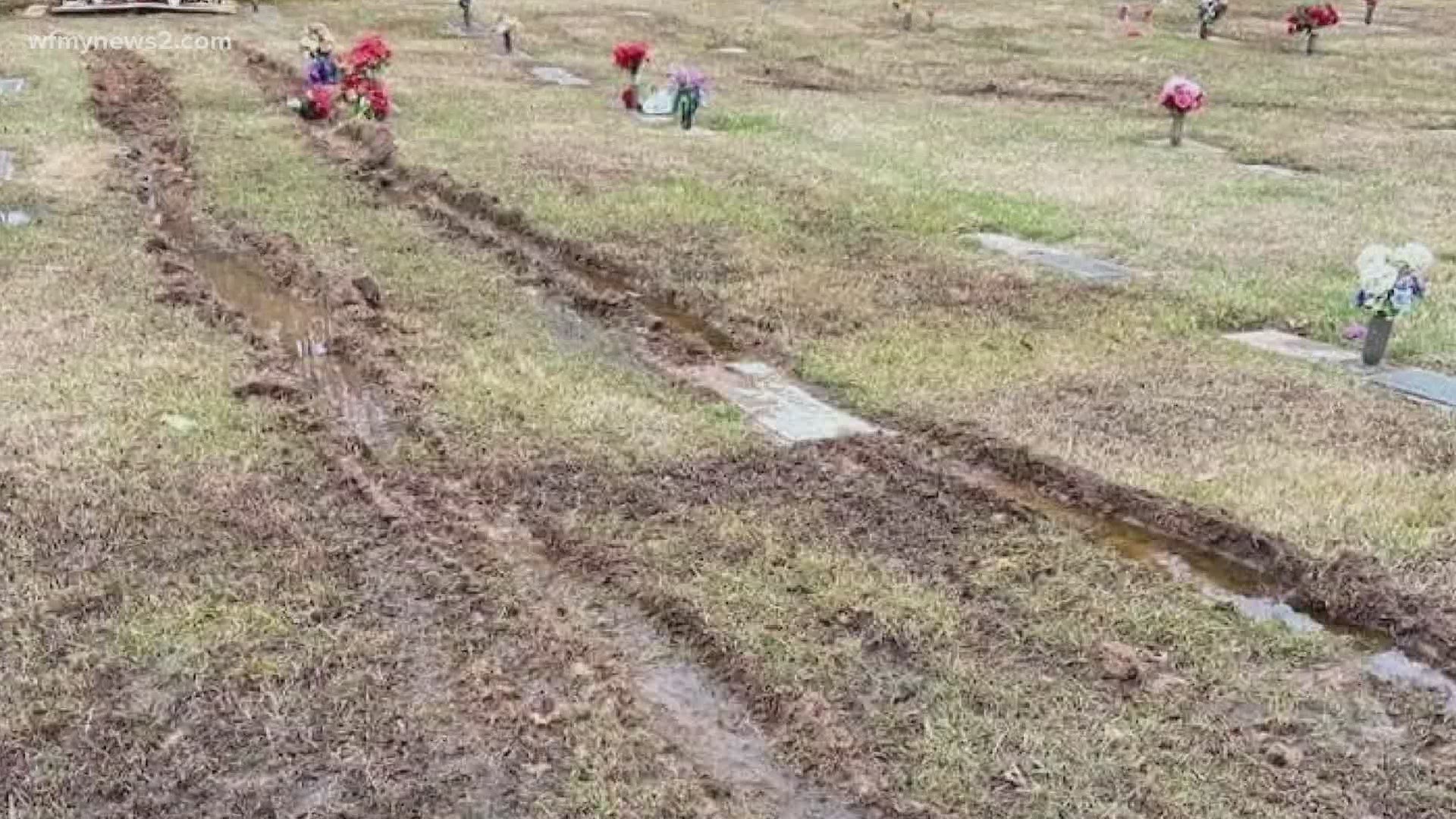 RANDOLPH COUNTY, N.C. — Ronnie Cook will never forget the day his life changed forever. It was November 25, 2007, Thanksgiving was just days away. His daughter Elizabeth had just finished work.

“It was a rainy night and (Elizabeth) was on her way home about a mile from the house,” Cook said.

While driving home Elizabeth Cook skidded off the road and crashed her car. The injuries were severe, and Elizabeth did not survive. She was just 31 years old when she died.

“(I think about her) every day of my life, she was my baby,” Cook said.

Elizabeth was buried at Randolph Memorial Park just a few miles from where she died. The family has spent many days visiting the gravesite in the past 13 years. Lately, the family has been dealing with some issues as it relates to the upkeep of the grounds.

“They are not keeping up the grounds and not fulfilling their duties I don’t think,” Cook said.

For the past year, the road immediately next to Elizabeth’s gravesite has been blocked off by barricades. The road closure forced the family to park outside the barricades and walk about 200 yards to the gravesite.

“It’s probably been closed off for approximately a year at this time,” Cook said.

The Cemetery is aware of the hole in the driveway and has this part of the road blocked off to ensure the safety of visitors and staff. The serves as a detour to the entrance to the Cemetery; however, any and all visitors are able to enter the Cemetery to visit loved ones. Please be aware the perpetual care trust funds do not disperse enough income to provide continued general maintenance to the Cemetery and to fix the sinkhole. The Cemetery has received a bid to repair the sinkhole and is in the evaluation process of contracting and funding this repair. The Cemetery commits to repairing the sinkhole as soon as possible, however, in the interim will continue to detour all visitors for their safety. We appreciate the opportunity to respond to Mr. Nance his complaint. Please let me know if you have any questions or concerns.

That response was sent to the commission in early October and the barricades were up for close to nine months by then. The road had some severe damage and one rather large pothole. Several families complained about the road and the barricades, but little was done.

Ronnie and his family reached out to WFMY News 2 toward the end of October. The family is frustrated they have to walk so far, every time they want to visit Elizabeth. They also hurt for one of their family members who has not been able to walk that far due to his health.

“It’s very depressing, he (Robert Manning) wanted to go speak with her but he can’t get there,” Cook said.

Manning is Elizabeth’s great uncle, he used to visit the gravesite a couple times a month but has not been able to get close for about a year.

“They didn’t need to block off (the road) and keep people from seeing their loved ones,” Manning said.

We reached out to the cemetery and we were eventually able to speak with the Senior Director for the company that runs the cemetery. We were told the company is in the process of rectifying the situation but described it as complicated and would take some time.

The cemetery told us it was vetting bids and should be submitting for approval soon. The cemetery did not provide a timeline only saying it would make the repairs as soon as possible. In the meantime, it did agree to cover the potholes and open the road to cars.

“We certainly appreciate all you have done for us,” Cook said, “It means a lot to our family so we can go there now and see (her).”

Just last week the cemetery found itself in a separate firestorm as a groundskeeper drove over several gravesites. There were tire tracks all over a portion of the cemetery and several markers were run over. The cemetery sending us this statement:

The leadership and staff at Randolph Memorial Park would like to issue a sincere and deeply felt apology to our community and all families with a loved one interred at our cemetery for the recent groundskeeping incident that caused damage to gravesites.

Our staff is trained to understand that Randolph Memorial Park is a sacred resting place for families in our community to entrust their loved ones into our care. We understand that trust has been broken with this incident and we are fully committed to restore the physical damage to all affected gravesites, as well rebuild the trust we sincerely strive to have with each and every family we serve. Strong and immediate action is being taken with our staff and those responsible for keeping the sanctity of our cemetery so that nothing like this incident will ever occur again. We ask for your patience and understanding as we complete these steps.

The cemetery has started to repair the damage done to that portion of the cemetery. Cook says it’s just another example of the lack of compassion shown by the cemetery and the people who operate it.

RELATED: 'Do you guys not have any respect at all' | Many families upset at tarnished state of Randolph Memorial Park