After meeting with his newly formed COVID-19 advisory board, President-elect Joe Biden stressed that wearing masks will help stop the spread of coronavirus. 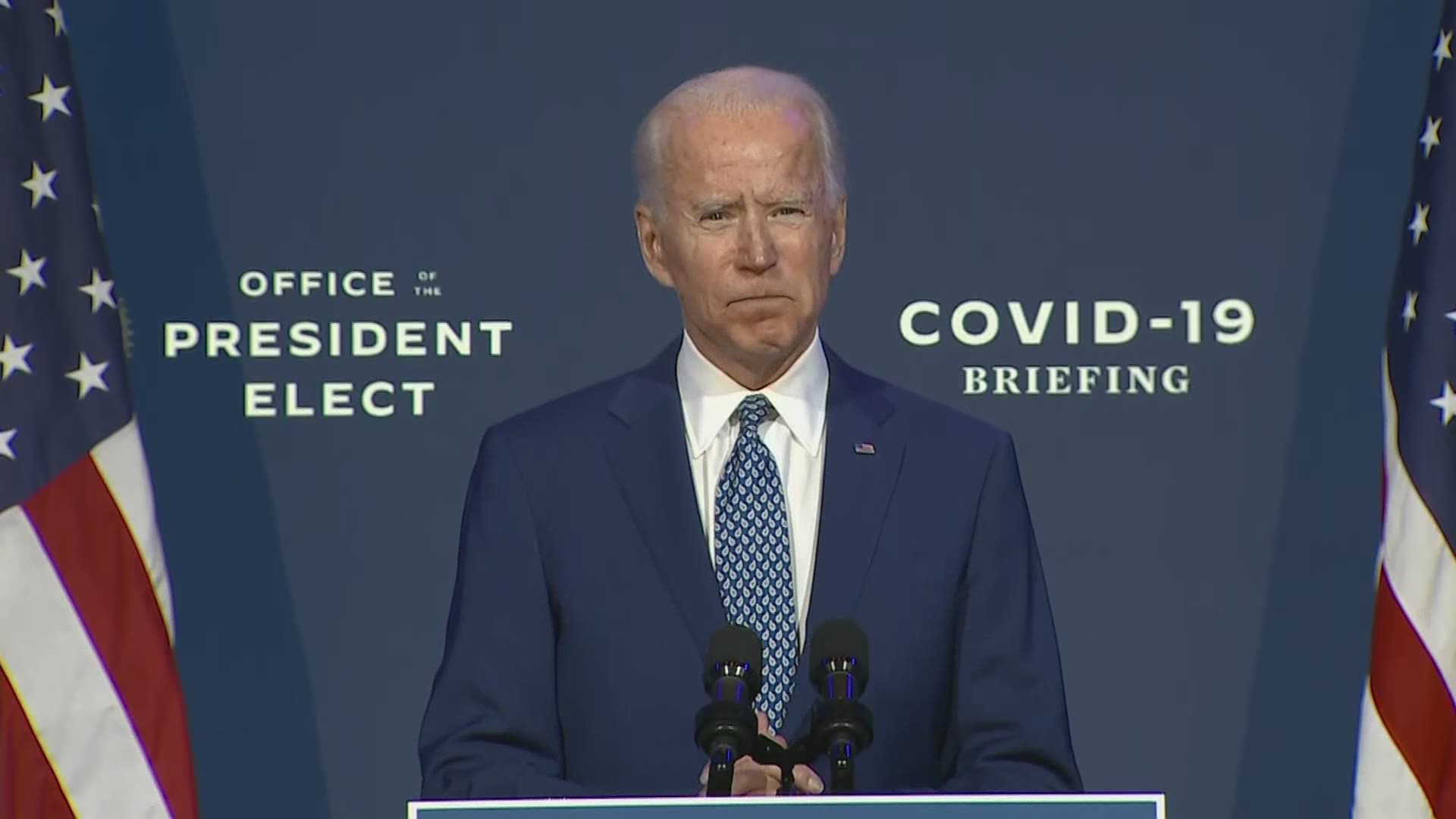 WASHINGTON — President-elect Joe Biden on Monday implored Americans to wear masks to slow the spread of the coronavirus, even as he cheered news about the promising development of a vaccine being developed by pharmaceutical giant Pfizer.

Biden in remarks after meeting with his newly formed coronavirus advisory board cautioned that Americans still face “a dark winter” and need to be aggressive about mask wearing and social distancing as infections continue to surge around the country. Though Pfizer announced promising results from a vaccine trial and is on track to file an emergency use application with regulators this month, Biden noted it could be months before a vaccine is widely available.

“We could save tens of thousands of lives if everyone would just wear a mask for the next few months. Not Democratic or Republican lives, American lives,” Biden said. “Please, I implore you, wear a mask.”

The Democrat's transition team also unveiled members of Biden's coronavirus working group tasked with developing his administration's pandemic response — something Biden says he wants to put in motion as soon as he takes office in January.

Pfizer, which developed the vaccine with the German drugmaker BioNTech, said it is on track to file an emergency use application with U.S. regulators this month.

This announcement is Biden's first major decision after he defeated President Donald Trump on Saturday to become the 46th president of the United States, positioning himself to lead a nation gripped by a historic pandemic and a confluence of economic and social turmoil. His victory came after more than three days of uncertainty as election officials sorted through a surge of mail-in votes that delayed the processing of some ballots. Biden crossed 270 Electoral College votes with a win in Pennsylvania.

Tune in for a debrief: https://t.co/fVLhCn6adH

Biden won't be sworn into office until Jan. 20.

Notable among the task force members is Rick Bright, a vaccine expert and former head of the Biomedical Advanced Research and Development Authority. Bright filed a whistleblower complaint alleging he was reassigned to a lesser job because he resisted political pressure to allow widespread use of hydroxychloroquine, a malaria drug pushed by President Donald Trump as a COVID-19 treatment.

Members of the COVID-19 Advisory Board have served in previous administrations and have experience engaging with and leading our country’s response to nationwide and worldwide public health crises.

The members of the advisory board include:

Public health officials warn that the nation is entering the worst stretch yet for COVID-19 as winter sets in and the holiday season approaches, increasing the risk of rapid transmission as Americans travel, shop and celebrate with loved ones.

“The next two months are going to be rough, difficult ones,” said Dr. Albert Ko, an infectious disease specialist and department chairman at the Yale School of Public Health. “We could see another 100,000 deaths by January.”

The U.S. is now averaging more than 100,000 new coronavirus infections a day, frequently breaking records for daily cases. Hospitals in several states are running out of space and staff, and the death toll is soaring.

The United States has more than 9.9 million confirmed cases of COVID-19, according to data from Johns Hopkins University.

As of Monday, the U.S. had more than 237,000 deaths from the virus. Worldwide, there are more than 50 million confirmed cases with more than 1.2 million deaths.

For most people, the new coronavirus causes mild or moderate symptoms. For some, especially older adults and people with existing health problems, it can cause more severe illness, including pneumonia and death.