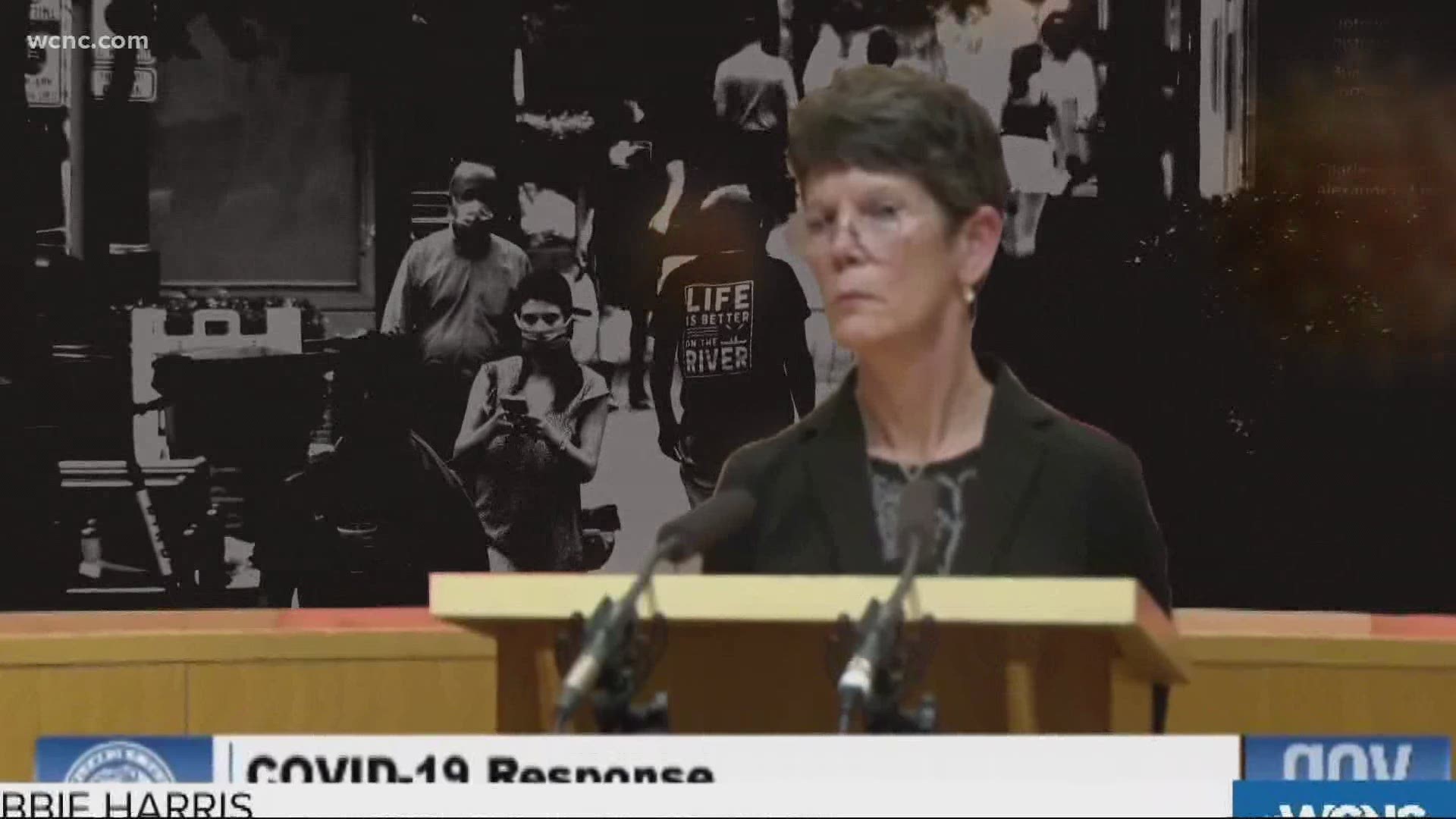 Her words come in response to questions related to emails WCNC Charlotte obtained that show she privately shared her support of "some level of children in the school setting" with fellow health directors last month, but not school board members the next day.

"I think it's a very complicated situation, but I do believe that some kids are going to be better off in some level of in-person learning and we need to stay focused on that and do what we can to get them back into that situation," Harris said Friday.

Harris continues to believe getting kids back to school and parents back to school should remain Mecklenburg County's priority. She said in-person learning is especially important for Pre-K, elementary and maybe even middle school students.

"Number one, it's not just my decision," Harris said defending her approach.

RELATED: Teachers could stay in classroom if exposed to COVID-19

Harris said she's working with Mecklenburg County's school districts and universities directly, following guidance from the state, monitoring the numbers and making adjustments to make sure students, faculty and staff are safe, but remaining flexible to meet the education needs of child in the process.

"I don't believe putting a specific date or recommendation on this at this point is helpful, especially as long as the school system, the universities and others are working so closely with us," Harris said.

In her July 14 email to fellow health directors, Harris explained her stance.

"I and my staff have been working with our school system for several months as they have been planning for re-opening," she wrote. "I've been careful not to recommend how they do things but what the public health implications could be in given scenarios. Bottom line here, even with high numbers, I am supportive of some level of children in the school setting with all of the protective/preventive methods solidly in place. I think the kids need it....as long as trends are somewhat stable and our hospitals are confident in their capacity the focus is more on maintaining what we have open and getting kids back to school – at least partially."

Harris' latest comments come as Charlotte-Mecklenburg Schools Board of Education Member Sean Strain, District 6, is pushing for the district's Pre-K through 5th grade students to return to school by mid-September.

Harris: No gathering is risk-free

Hundreds of people are staying at the Westin Hotel in Uptown, but before they arrived, they’ve already gone through safety steps.

Even a scaled-down version of the RNC is bigger than any other event since the pandemic began.

“We are hosting the largest sanctioned event in Charlotte and in North Carolina since the onset of the pandemic,” Harris said.

In a virtual news conference Friday, Harris described the planning and procedures for the major event. That includes testing attendees before their arrival and retesting them once they’re in Charlotte.

“All attendees have been tested seven days prior to the event, and if they did not have a negative test, will not be attending,” Harris said.

There will also be daily temperature screenings and symptom checks for attendees, hotel staff, and vendors. In addition, Harris says there will be a 10 person limit indoors with masks required, and even then only certain events are allowed.

“The only events and meetings that are approved to occur are the ones necessary to conduct the business to nominate a candidate,” said Harris.

Harris said if someone tests positive, contact tracing will begin immediately.  She also said RNC officials will be tracking people who attended the event in the days and weeks to come.

“Those individuals who have come from out of state will be followed up by the RNC on five, 14, and 21 days,” said Harris. “And if there are any cases that are recognized during that time, that information will be communicated back, so we can do the appropriate contact tracing.”

Harris said no gathering is risk-free, but that steps in place are meant to reduce the risk as much as possible.