The nation’s largest drug-store chain said Thursday that it would sell the generic version of Impax Laboratories’ Adrenaclick treatment for $109.99 per two-pack before potential discounts 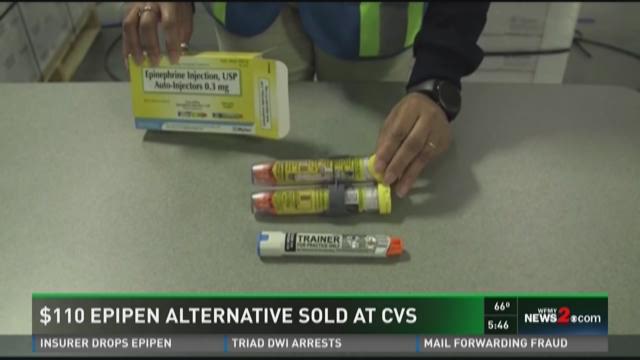 CVS Health said Thursday that it would sell a generic version of an EpiPen competitor for a lower list price in a bid to tap into a groundswell of public resentment over skyrocketing drug costs, including fresh attacks by President-elect Donald Trump.

The nation’s largest drug-store chain said Thursday that it would sell the generic version of Impax Laboratories’ Adrenaclick treatment for $109.99 per two-pack before potential discounts, or about one-third the initial $300 list price of pharmaceutical giant Mylan’s new generic EpiPen.

The move comes amid public consternation over multiple price increases that left the brand-name allergic-reaction treatment EpiPen with a list price of more than $600, up from about $100 in 2009.

This is a photo illustration of an EpiPen, which dispenses epinephrine through an injection mechanism for people having a severe allergic reaction.

Trump attacked drugmakers on Wednesday for sharp hikes in drug prices. Outrage over steep increases and the corresponding profit boon for drugmakers is one of few bipartisan matters in Washington, although disagreements over how to address the matter have prevented action.

"They're getting away with murder," Trump said Wednesday of drug companies, whose stocks plunged afterward.

In addition, the development heightens tension between pharmacy benefits managers, such as CVS Caremark, and drug giants, which blame each other in part for skyhigh drug prices.

The epinephrine injector treats allergic reactions in potentially life-threatening situations. Adrenaclick, approved by the Food and Drug Administration in 2003, also administers epinephrine but through a slightly different injection.

In a business often shrouded in uncertainty over pricing, the CVS decision to target Mylan reflects an unusually public attack by a pharmacy giant on an individual pharmaceutical company.

But the chain, which operates more than 9,600 pharmacies, may have financial incentives to make a play against EpiPen.

Beyond generating publicity for siding with aggrieved customers, the company's PBM negotiates pricing with drug companies and may be seeking to tip the balance of power in its favor. Caremark manages prescription drugs through more than 68,000 retail pharmacies, including its own, as well as mail-order operations.

CVS faces "competitive pressures" in the pharmacy benefits management sector that have prompted "a larger portion of rebates and/or discounts," the chain said in a public filing Nov. 8.

The company recentlly warned that it would lose more than 40 million retail prescriptions in 2017 for several reasons, including competitor Walgreens' new mail-order pharmacy tie-up with Prime Therapeutics.

Pharmacy benefits managers are also under the microscope for their own role in drug price increases. New restrictions on benefits coverage by CVS preclude coverage for what it calls "hyperinflation" drugs and generic alternatives to specialty medicines, called biosimilars, according to drug-coupon service GoodRx.

Caremark now excludes 130 prescriptions from insurance coverage, making it the “most restrictive provider going into 2017,” GoodRx said in August.

Asked whether the Impax deal reflects an attempt to bolster Caremark's bargaining position, Foulkes did not address the matter. She also declined to reveal financial details of the company’s deal with Impax or to say whether CVS is siding with Trump on drug prices.

“Our focus has always been on finding solutions for patients first and foremost,” she said. “The best thing that can happen to keep drug prices low is to have a lot of competition in the marketplace.”

Mylan, for its part, has repeatedly argued that most customers don’t pay the full price of EpiPen out of pocket, with many relying on insurance or special manufacturer’s coupons. Still, the company introduced a generic version of its own treatment in December amid swirling scrutiny over profit taking. The company also offers rebates for certain patients and has said that about 85% of EpiPen users pay less than $100 out of pocket.

Foulkes said “in most cases” customers will qualify for a manufacturer’s coupon for $100 off the Adrenaclick treatment, making it $9.99 for them. She said Medicaid and Medicare plan members won’t qualify for the coupon but that CVS pharmacists will work with customers to identify their cheapest route to acquiring the treatment.

“We really think it solves this pain point in a very specific way and brings the cost down dramatically,” she said.

The deal also reflects a sharp price cut compared to certain CVS competitors. For example, Adrenaclick could be found in Walmart and Sam’s Club stores in August for $142 with a GoodRx coupon, according to Consumer Reports.