The EXIT procedure involved partially delivering the baby via cesarean section and keeping him attached by his umbilical cord to the placenta. 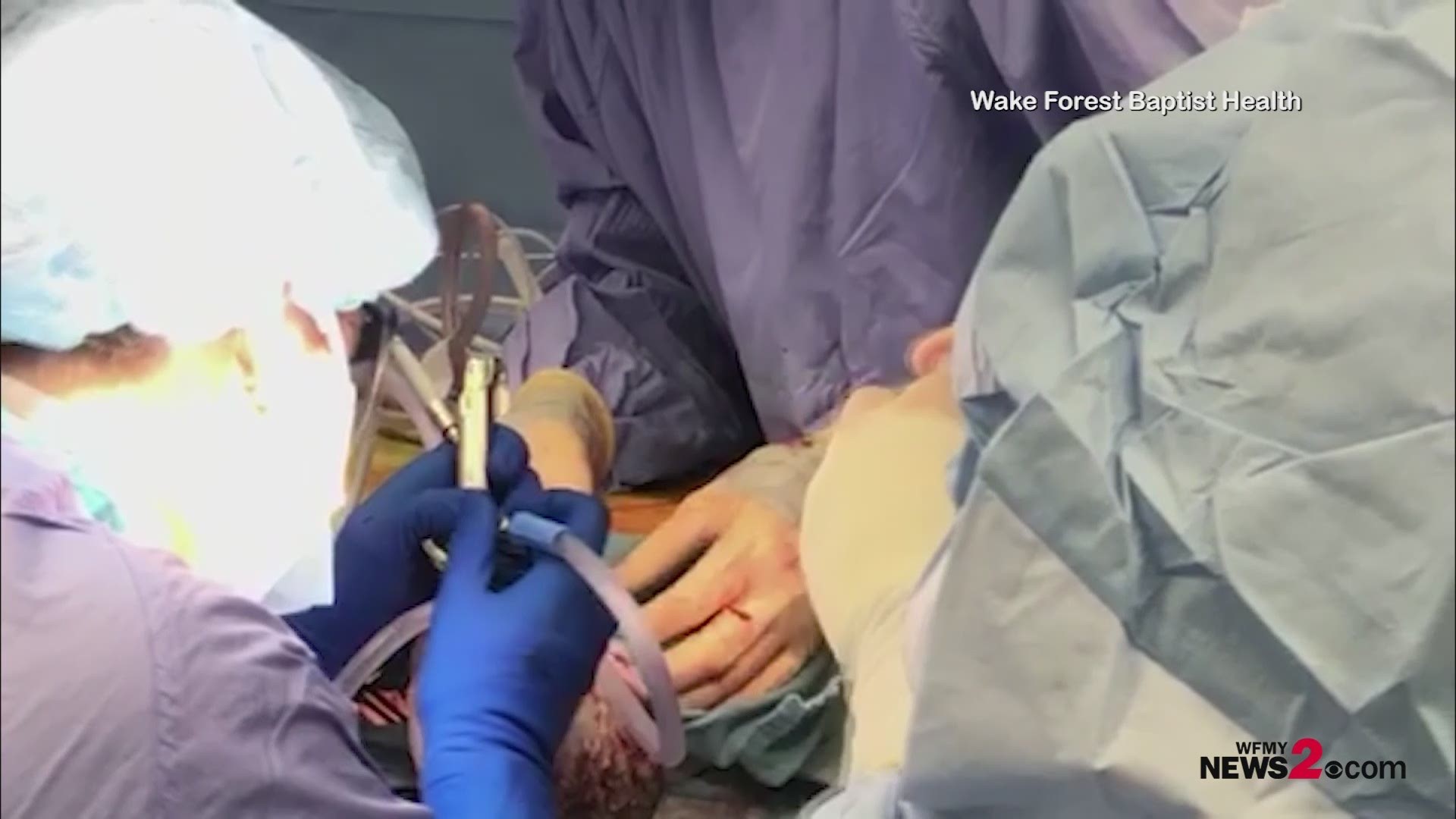 WINSTON-SALEM, N.C. — He's almost two months old and unbeknownst to him, his birth is one for the medical record books.

That's because a routine visit to the obstetrician by his mom led to a medical emergency and an all hands on deck procedure by a village of doctors,  and specialists at Wake Forest Baptist Medical Center (WFBMC), according to a news release.

Nicole Nelson and her husband went to see their obstetrician, for a routine check up and ultrasound and then things went in another direction for the couple. The ultrasound revealed a large mass compressing the neck of their unborn child, Maxton.

“When Dr. Denney saw that the mass appeared to be blocking Maxton’s airway, he directed us to Wake Forest Baptist right away,” Nicole said. “Once we arrived, we were admitted to the hospital and had a fetal MRI to get a better look at Maxton. The doctors told us our baby would need to be delivered in the morning.”

Denney and a team of more than two dozen surgeons, obstetricians, nurses and other pediatric specialists got to work the next day to perform a specialized procedure. 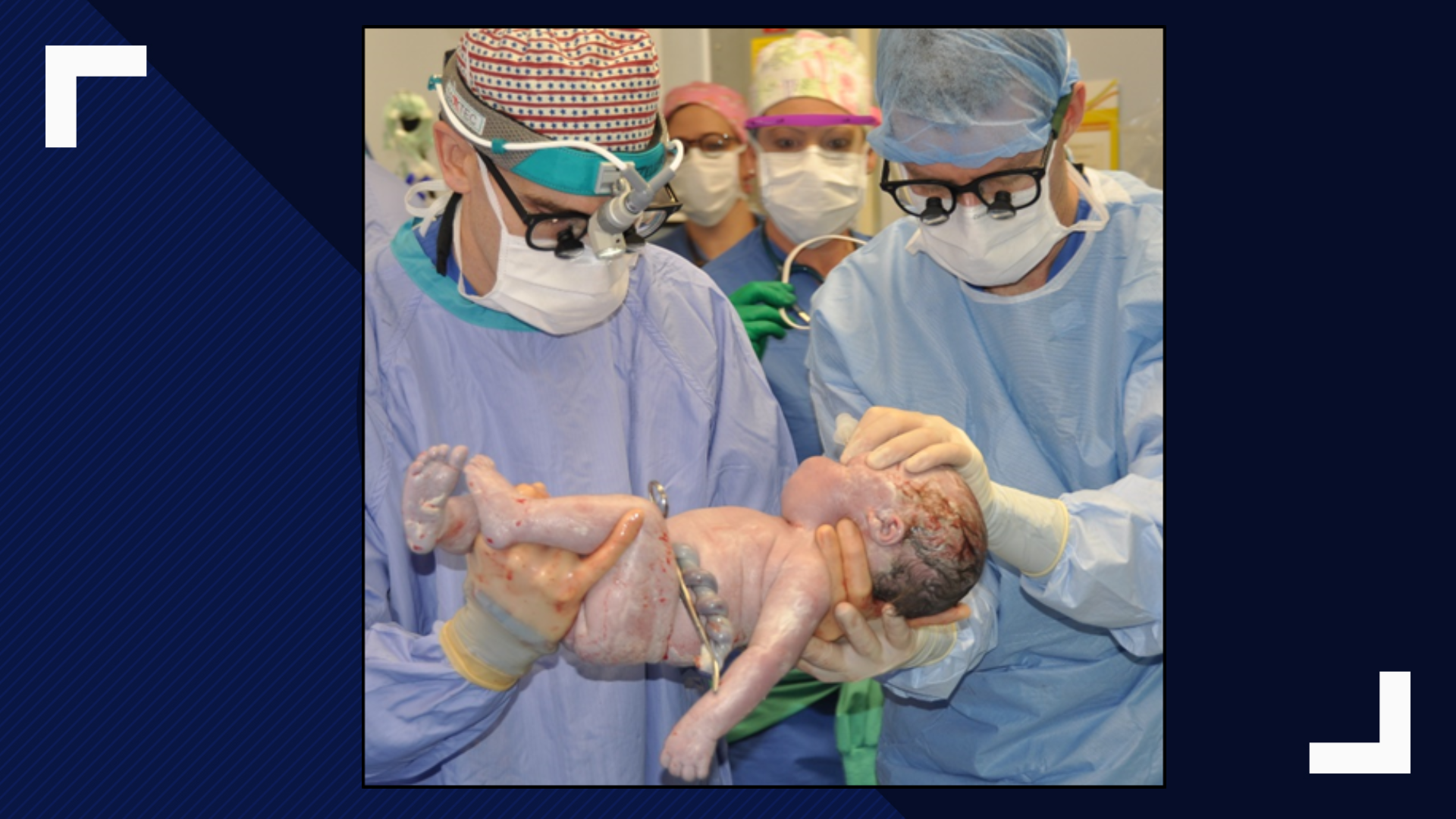 Because Maxton’s airway was blocked by the neck mass, there was a high risk of brain injury or even death with a normal delivery, so the team decided to perform what is known as an EXIT (ex utero intrapartum treatment) procedure.

*Warning Raw video may be considered graphic to some*

The procedure involved partially delivering Maxton via cesarean section and keeping him attached by his umbilical cord to the placenta, while Eleanor Kiell, M.D., and Daniel Kirse, M.D., who are both part of the pediatric ENT team, placed a breathing tube past the blockage so Maxton could breathe. Once his airway was secured, the umbilical cord was cut and he was fully delivered.

The following day, the pediatric and ENT surgeons removed the mass from Maxton’s neck and 12 days later, he was able to go home, WFBMC says.

“While we normally have several weeks to prepare for this sort of complex procedure, we are thankful that an ultrasound was performed that alerted us to this problem,” said Luke Neff, M.D., pediatric surgeon at Brenner Children’s Hospital, part of Wake Forest Baptist Medical Center. “What could have been a tragedy for Maxton and his family ultimately had a happy ending. This successful outcome illustrates the incredible coordination to quickly bring together the right experts and all the resources needed to save the lives of both the baby and the mom.”

“There is no doubt in my mind that they saved Maxton’s life and our family is eternally grateful for everyone who was involved,” Nicole said. “It is truly a miracle.”

Nicole and Maxton are both doing well and Neff anticipates Maxton will have a healthy and normal childhood.

Meet Maxton after a village of Winston-Salem doctors save his life with unique procedure.

'We just knew we couldn’t pass up the chance to at least try': Vancouver couple moves to Dallas for uterus transplant