It was super cold during peak viewing time and most sky gazers in the Piedmont Triad were able to get a great view and photos of the super moon lunar eclipse. 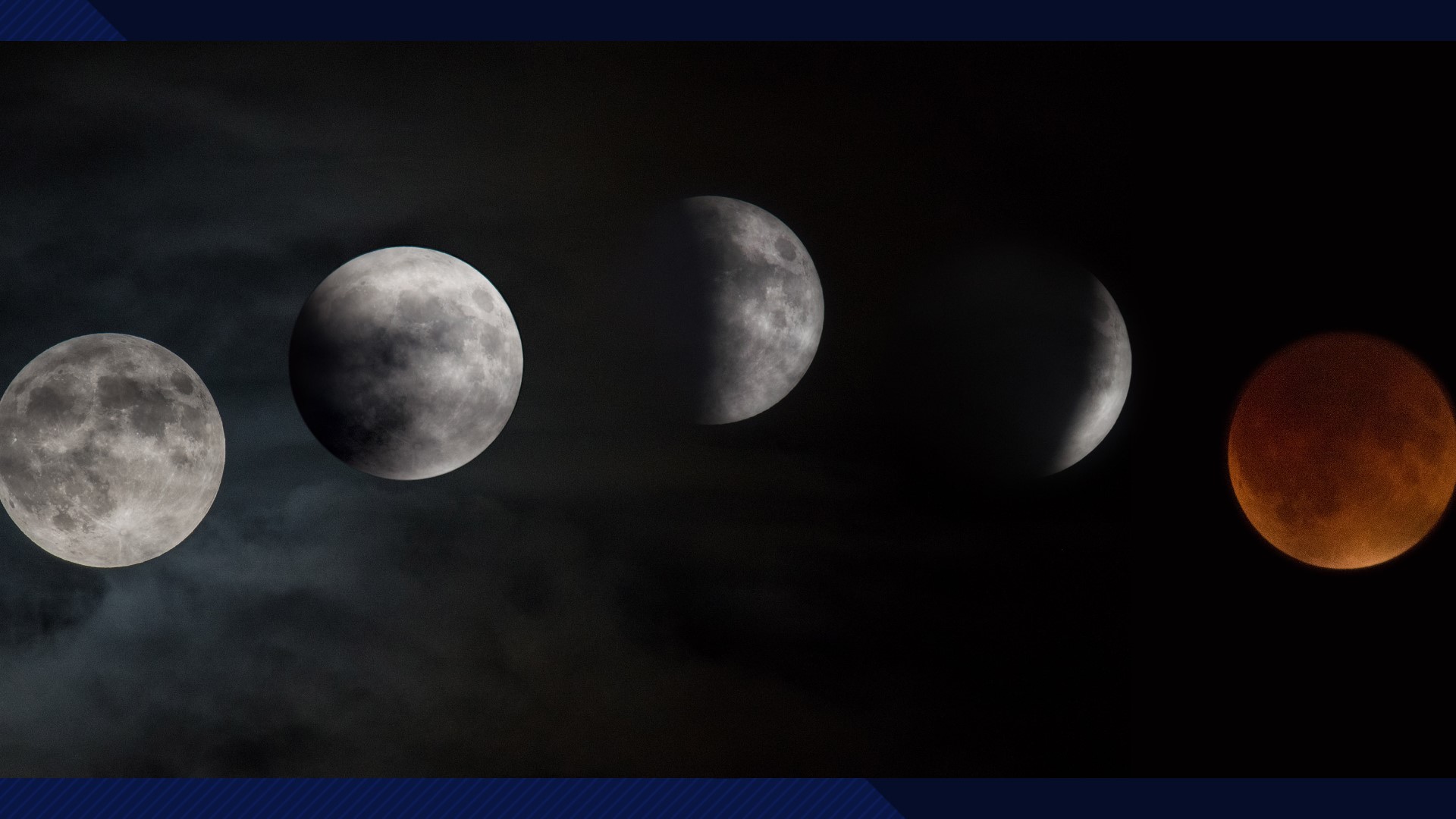 GREENSBORO, N.C. — If you haven't heard, a special event happened in the night sky Sunday night into early Monday. It was a total lunar eclipse during a super moon. The official name is Super Wolf Blood Moon, a long name that has a very specific meaning.

The eclipse started Sunday night and ended early Monday morning. It was super cold during viewing, but most in the Piedmont Triad were able to see the night sky during the Super Wolf Blood Moon.

The Total eclipse phase is when the moon is completely shadowed. Totality can last for a few seconds, or more than 100 minutes. July 27 and 28 of 2018 the world saw its longest totality of the century. The moon was covered in earth’s shadow for 1 hour, 42 minutes and 57 seconds.

Technically there are seven phases of a Lunar Eclipse:

The Penumbral phases of the eclipse are the times in which the moon is passing through the diffuse outer shadow of the earth. This is difficult to observe. Most people will begin to notice an eclipse starting with the Partial Phase.

During the partial, total and maximum phases of the eclipse, the moon passes through the Earth’s umbra, or the inner part of the Earth’s shadow. This is the time when the moon begins to look darker and will take on the red, orange, brown or yellow hues.

WHAT'S IN A NAME:

A lunar eclipse occurs when the Moon passes directly behind the Earth and into its shadow. The sun, moon and Earth must be closely aligned and it can only happen on the night of a full moon. Every full moon has a different name, and the first part of this moon’s name has to do with how close the moon is to the earth.

This Sunday’s lunar eclipse is also happening on the night of a supermoon. A full moon is called a supermoon when the moon itself is near its perigee, or its closest point to the earth in its monthly orbit. Often times a supermoon will appear larger in the night sky. This only happens a few times a year. In 2019, our supermoons fall on January 21, February 19 and March 21.

The second part of this moon’s name has do with the time of year. Back before we had a calendar, different cultures around the world would use the moon’s phases to keep track of the time of year. Native Americans called the January moon a “Wolf Moon," referencing the howling wolves they would hear on cold, January nights.

February is known as the “Snow Moon”. Around the country, it is considered one of the snowiest months of the year.

March’s full moon is called the “Worm Moon” because of the worm tracks that would begin to appear this time of year as the ground starts to thaw.

Some parts of North America will see many flowers begin to bloom during the month of April, making this month’s full moon a “Pink Moon”.

May takes on “Flower Moon” as those flowers are in full bloom during this month’s full moon.

June is called the “Strawberry Moon” as strawberry picking season is as its peak.

Fishing tribes in North America named the August moon the “Sturgeon Moon” since Sturgeon were the most easily caught this month.

The “Harvest Moon” most commonly occurs in September. This was the time when Native Americans knew to harvest corn.

The “Hunter’s Moon” falls in October. During this month animals are more easily spotted and hunters were able to ride easily over the fields.

November’s full moon is called the “Beaver Moon”. Tribes would set beaver traps this time of year in hopes to secure warm fur for the winter.

Every once in a while you also get what is called a “blue moon." This references the second full moon that can happen in a month.

The word blood speaks to the lunar eclipse. The moon will often take on a dark red color when it passes into the earth’s shadow. While this is the most common, a lunar eclipse can also appear orange, brown or even yellow in color. It just depends on the particulates in the night sky.

The next total lunar eclipse in North America will be May 26, 2021.