Political leaders and institutions offered their words of commemoration on Saturday to honor the victims and heroes of September 11th, 2001. 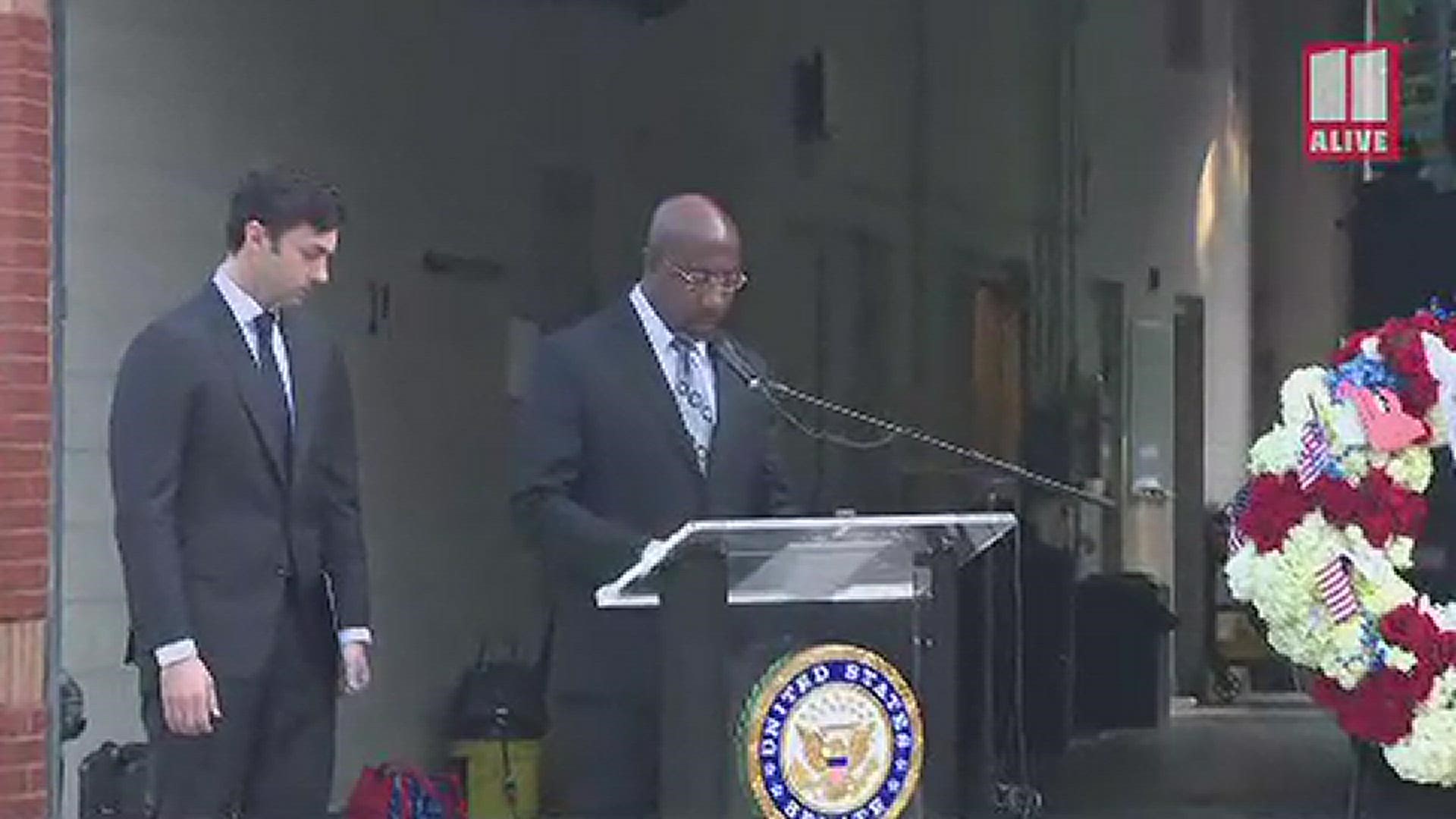 ATLANTA — Georgia leaders invoked the heroism of first responders and vowed that their sacrifices would always be remembered and honored Saturday, as the nation marked 20 years since the attacks of September 11th, 2001.

Republican and Democrat alike spoke of the loss that day, and of the enduring example of those who gave their lives trying to usher others to safety.

Speaking at a South Fulton firehouse, Sen. Rev. Raphael Warnock said "we honor especially the courage and the sacrifice of our first responders."

His counterpart Sen. Jon Ossoff, also speaking in South Fulton, echoed those comments in saying "the first responders among us today represent the best of what it means to be American."

"Putting what we share above all else, looking out for one another as a community, as a nation, as a human family," Ossoff said. "That spirit of unity that emerged on and after September 11th, it's up to all of us to sustain and rekindle that now."

Gov. Brian Kemp, in a video message posted to Twitter, hearkening back to those who were lost said "on this day our hearts are with their families and loved ones, we will never forget."

"After that tragic day 20 years ago we decided, as the greatest country on earth, that we will never let an act of pure cowardice define us," the governor said. "That’s why 9/11 is known as Patriot Day, to memorialize the innocent victims but also to acknowledge the heroism and bravery of countless Americans both in the rubble of those towers and overseas in the War on Terror."

The governor was joined in his video message by Maj. Gen. Tom Carden, the adjutant general of the Georgia National Guard.

"Despite the unfathomable loss, in the days that followed  9/11 we saw immense bravery and fortitude," Maj. Gen. Carden, an Iraq veteran, said. "We will always remember the countless first responder heroes and those who rushed in, even when the danger had not subsided, with the noble mission of saving their fellow Americans."

Congresswoman Nikema Williams, the 5th District representative in Atlanta, said after 9/11 the "country came out stronger because our enemies will never defeat us," and noted an enduring lesson that followed.

"We've also learned that racist, xenophobic policies in the name of national security will never work," Rep. Williams said. "The American ideals of freedom and equality are stronger than evil and hatred. Today, on the 20th anniversary of the 9/11 terrorist attacks, we should all recommit ourselves to those ideals.”

Institutions, too, paid tribute, as Emory University posted a tribute video to "remember those we lost 20 years ago today and honor those who continue to keep us safe" while the bells at Clark Atlanta University's Harkness Hall rang out "America the Beautiful."

The iconic bells of Harkness play “America the Beautiful” as we pause in reflection.#CAUSalutes #PatriotDay #911Anniversary #NeverForget pic.twitter.com/jzR2oyLNBE

Atlanta Fire Rescue, highlighting the loss of 343 firefighters among the dead on 9/11, wrote on Twitter that "we remember, mourn, and show gratitude to first responders who saw the danger and advanced."

Today marks the 20th anniversary of the day we lost nearly 3000 people to terroristic acts, including 343 firefighters.
———
At the Atlanta Fire Rescue Department, we remember, mourn, and show gratitude to first responders who saw the danger and advanced. pic.twitter.com/SVXiQtV5F2