How Quickly Can an Attached Tick Make You Sick?

Once a tick bites you, disease transmission can take days—or minutes. Here’s what to know. 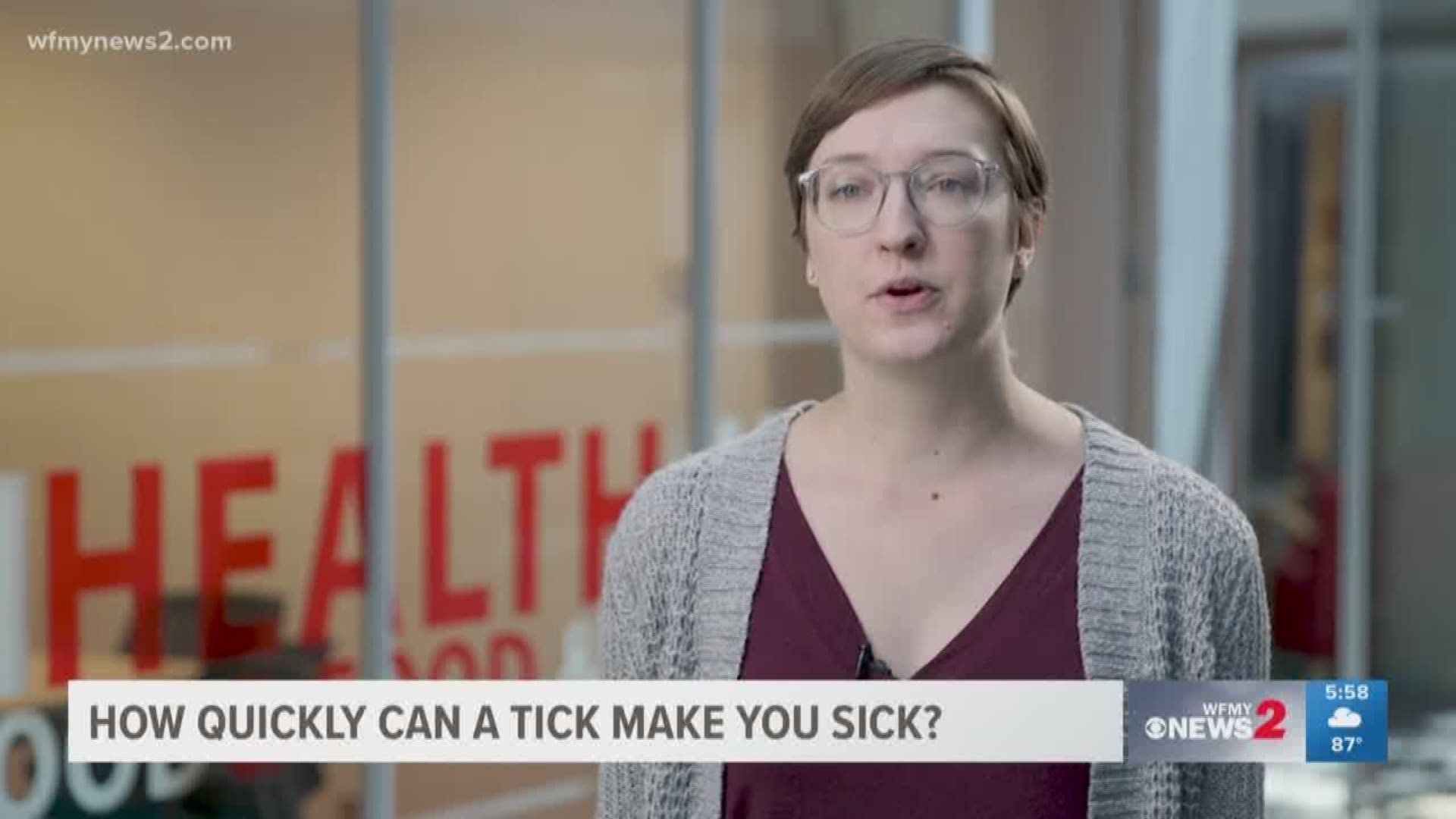 For a tick bite to make you sick, the tick must be attached to you and feeding for a certain amount of time. For some diseases, this can take a day or more. For others, it takes just minutes.

We spoke with experts in tick biology to find out why there’s so much variation, and what you need to know to protect yourself.

How a Tick Infects You

First, it’s important to understand that ticks can transmit bacteria, viruses, and parasites, and all of these behave a little differently.

When it comes to the transmission of tick-borne disease, scientists arguably know the most about how this works for Borrelia burgdorferi, the bacterium that causes Lyme disease, which (in the U.S.) is transmitted by blacklegged ticks (or deer ticks) as well as Western blacklegged ticks. That depth of knowledge is at least in part because so much research has been conducted into developing a vaccine against Lyme, explains Jean Tsao, Ph.D., associate professor at Michigan State University in the Department of Fisheries and Wildlife and the Department of Large Animal Clinical Sciences.

A 2018 review of all of this evidence published in the journal Ticks and Tickborne Diseases confirmed that it most likely takes more than 24 hours and closer to 48 hours of tick feeding time for the Lyme pathogen to pass from tick to human. (Your chance of getting Lyme disease from a tick that has been attached for less than 24 hours is “extremely small,” according to the Centers for Disease Control and Prevention.)

And why does it take so long? It has to do with the way ticks transmit disease, which is generally not a one-step process.

Blacklegged ticks pick up Lyme bacteria from a host, commonly a white-footed mouse. Those bacteria, also called spirochetes, settle in the tick’s gut.

When the tick finds its next host—possibly a human like you—it breaks the skin and starts injecting saliva into the wound, says Lars Eisen, Ph.D., research epidemiologist with the Centers for Disease Control and Prevention’s Division of Vector-Borne Disease, and author of the 2018 review. “Over several days, the tick alternates between injecting saliva and ingesting blood.”

That whole process is complicated, notes Eisen, which is one reason it takes such a long time. Additionally, in order for an infection to take hold, a sufficient number of bacteria have to enter the host’s body. If only a few bacteria make it in, then the human or animal immune system may be able to fight them off and prevent an infection, according to Tsao.

How Long Do Other Pathogens Take to Infect You?

A number of other tick-borne diseases similarly may take up to a day or longer to get themselves from the tick into the human or animal host, according to scientists’ estimates.

For certain other infections, however, it’s a different story. Studies have shown that Powassan virus, which is also transmitted by blacklegged ticks and can cause severe symptoms such as brain or spinal cord inflammation, can be transmitted from a tick to a person in as little as 15 minutes.

How? Saravanan Thangamani, Ph.D., a professor in the department of microbiology and immunology at SUNY Upstate Medical University, says it has to do with a difference in how viruses behave inside ticks, compared with bacteria. Instead of camping out in the tick’s gut, as bacteria generally do, viruses multiply in the salivary glands, "ready to be transmitted to the human or animal the next time the tick feeds on them.”

Studies have demonstrated this for Powassan virus, he says, as well as for tick-borne encephalitis virus, a common tick-borne infection in Europe and Asia. And he says his lab has been generating data to suggest transmission times for Heartland virus, another recently discovered tick-borne pathogen in the U.S., are similar to those of Powassan.

A few other tick-borne illnesses can be transmitted in minutes or hours instead of days.

One is Rocky Mountain spotted fever. Estimates vary about how long it takes for a tick to give you this disease, but the CDC advises that the bacteria that cause it could be transmitted in as little as 2 hours.

Another is a disease called tick-borne relapsing fever, which is caused by another type of Borrelia bacteria, distantly related to the Borrelia that cause Lyme.

Tick-borne relapsing fever is transmitted by soft ticks, which lack the hard shield of the ticks that transmit diseases such as Lyme. And these soft ticks only feed for a few minutes, usually less than half an hour, according to the CDC.

“The relapsing fever bacteria that they spread therefore have, by necessity, evolved to be transmitted very quickly,” Eisen says.

The good news is that soft ticks, which make their homes in the burrows of hosts (often rodents), have less contact with humans. When people do contract tick-borne relapsing fever, it’s usually because they’ve spent the night in a rodent-infested cabin in a rustic or mountainous area.

What Tick Transmission Times Mean for You

It’s important to remember that the infections that can be transmitted from a tick to you very quickly, like Powassan and tick-borne relapsing fever, are rare. The CDC estimates that 300,000 people contract Lyme disease every year—while just 34 cases of Powassan virus were reported to the CDC in 2017 and just 504 cases of tick-borne relapsing fever between 1990 and 2011.

For pathogens that generally take a longer time to transmit, there’s time to act before an attached tick causes a disease. Think of it as a “grace period,” Tsao says, that gives you time to thoroughly check for ticks and remove any that you find attached to you. (Here’s how to remove a tick.) The CDC recommends showering within a few hours of any potential tick exposure—that will wash off any ticks that may be crawling on you but that haven’t attached yet, and gives you an opportunity to do a thorough check for any ticks that did find a place to bite.

But given that the risk of a quick-transmitting disease, although rare, isn’t zero, it’s also important to take precautions against getting bitten in the first place. Avoid tick habitat if you can by staying out of wooded or grassy areas; when you’re on a hike, stick to the center of the trail and dress in long pants, long sleeves, and closed-toe shoes. Use an EPA-registered insect repellent on any exposed skin (see a few of our top-rated picks below), and consider buying permethrin-treated clothing or treating clothes with permethrin yourself.