Some residents at a town hall meeting expressed concern that Jamestown would lose its small-town character, while others felt development was inevitable. 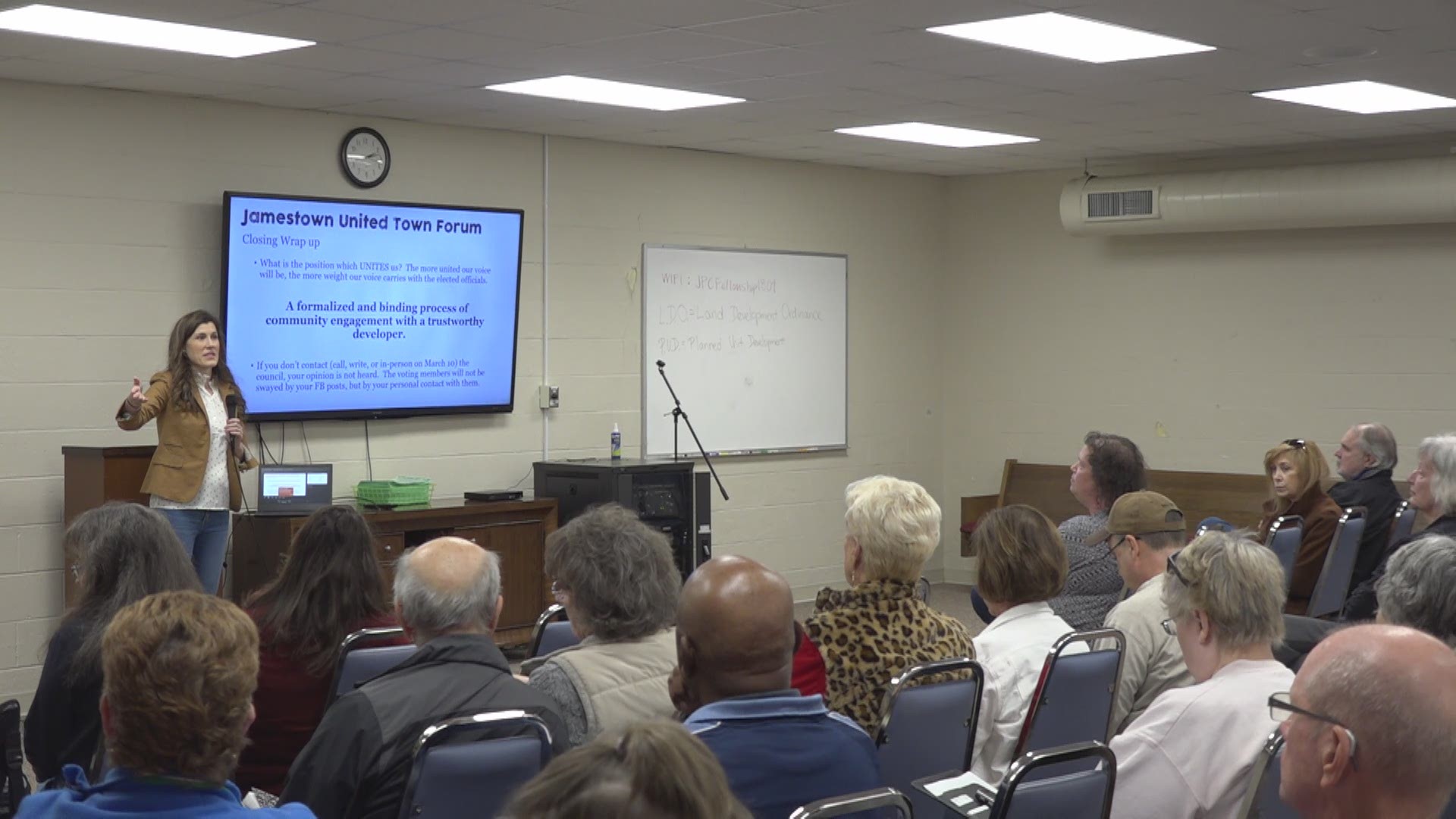 JAMESTOWN, N.C. — A large planned community proposal that could double the population of Jamestown has ignited debate over the future of the town's identity.

On Sunday, more than 120 community members gathered at Jamestown Presbyterian Church to share information and strategize how they can have a say in what will become of the 467-acre plot of farmland located at the corner of Mackay Road and Guilford College Road.

Jamestown is nestled between Greensboro and High Point, with a population of roughly 4,490 people, according to the latest estimate in 2018 from the U.S. Census Bureau.

Greensboro-based Diamondback Investment Group unveiled its plans for the "Castleton Village" planned community on Feb 13, which would include 1,700 homes and townhomes -- complete with a shopping center connected by walking trails, entrance monuments, parks, swimming pools, and lighting.

The property is currently owned by one family who has decided to sell the land, according to information presented by the developers at a Feb. 13 meeting.

The planned community would have a unified design scheme with 141 aces of the land remaining as green space, according to a press release from the developer. The commercial area within Castleton Village would include a nine-building "apartment village" and might also include a grocery store, small shops, and office spaces.

But the development cannot move forward without the town amending its land development rules and the subsequent approval of town council.

The next public event related to the development is March 10th at 6:30 p.m. in the Ragsdale Civic Center. Town Council will meet at Town Hall to consider adding a Planned Unit Development (PUD) as a new zoning district to the Land Development Ordinance (LDO).

"I am against the PUD. I think it would allow developers too much control over how much they develop the property," Fogleman said. "We do not need commercial property across the street from subdivisions. It's just not necessary."

Sunday's town forum was organized in part by Katie Gumerson, who lives in Jamesford Meadows next to the proposed development. She is also concerned that amending the land ordinance this quickly would usher in development that residents are not prepared for.

"I hear mostly that people are concerned about the density of the plan that was presented. It is a lot of residents-- doubling the size of Jamestown. I am concerned more about the traffic. I feel those are shared concerns," said Gumerson.

Residents who spoke at the town forum expressed concern about unanswered questions related to the development, including its impact on school redistricting, roads and infrastructure, and shared public utilities. The larger concern shared by those who spoke out was whether Jamestown would lose its cozy, small-town character. Several residents said Jamestown already felt overcrowded.

"Jamestown still has that small-town, rural feeling despite the area around us exploding. And that really is a gem," one resident said.

"My overall concern is that we grow Jamestown to the very edge of its land," said Robert Frederick, a Jamestown resident. "It's Jamestown's decision whether it wants to grow right up next to Greensboro. And that decision is something that we should be thinking carefully about. America is all about self governance."

Frederick said he is concerned that moving forward with amending the land development ordinance and then developing the land conflicts with Jamestown's ongoing comprehensive plan.

Another resident, Laurette Guay, said she hopes the entire community of Jamestown will be able to decide whether to move forward with development plans.

A couple residents who spoke encouraged community members to work with town council on the development of the nearly 500-acres of land, because they believed it was inevitable that it would be sold and developed into homes, businesses, and public space in the near future.

John Capes, a Jamestown town council member, spoke to the group Sunday, assuring them that town council was ready to listen to community members and hear their concerns.

"We want to speak to every single person that has a concern, we want to understand where people are coming from, and we want to make sure they comfortable that they have been heard. I think that's vital," said Capes.

After Sunday's meeting, organizers distributed flyers for distribution throughout Jamestown to remind residents of the upcoming public hearing on March 10th.

Soggy start to the week