Former officer analyzes the video of the traffic stop confrontation between Sandra Bland and a trooper. 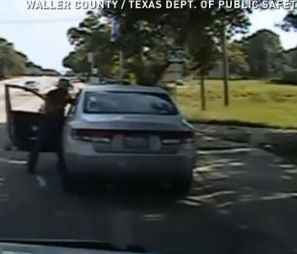 Newly released video of an officer pulling over Sandra Bland raises questions about your rights during a traffic stop.

Bland is the woman who authorities say was found hanging in her jail cell in Texas.

Ahead of her arrest, dashcam video shows a tense confrontation between a state trooper and Bland.

In the video the trooper orders Bland to put out her cigarette.

When she refuses he orders her to get out of her car.

That's when things really start to heat up between the two.

Frank Mickens: So he says you seem very irritated. And she says I am. So far so good?

Frank Mickens: So when he says step out of the car right after she says she's not going to put out the cigarette, is that a red flag for you?

Ed Cobbler: It is

Ed Cobbler: I'm sure when she steps out of the car she's going to be more in his space. He's probably going to order her to put out the cigarette and detain her.

Frank Mickens: Does she have to step out her car?

Ed Cobbler: He has not placed her under arrest.

Frank Mickens: Is it okay that he is talking to her the way he is, saying that he will light her up?

Ed Cobbler: No. I will light you up is not good terminology. It appears to be a minor traffic infraction. She should have been issued a ticket and been on her way.

Frank Mickens: Do you think that person had it out for confrontation?

Ed Cobbler: In my opinion something set him off.

Cobbler says if you're under arrest, yes you do need to follow the officer's instructions to put down your phone.

Stay as calm as possible.

The more you talk in a confrontation, the greater chance of things going south and you getting arrested.