Cars parked illegally are often towed. The owner would then call the tow yard. But if it's stolen and found DMV must notify the owner. It did but it took 3 months. 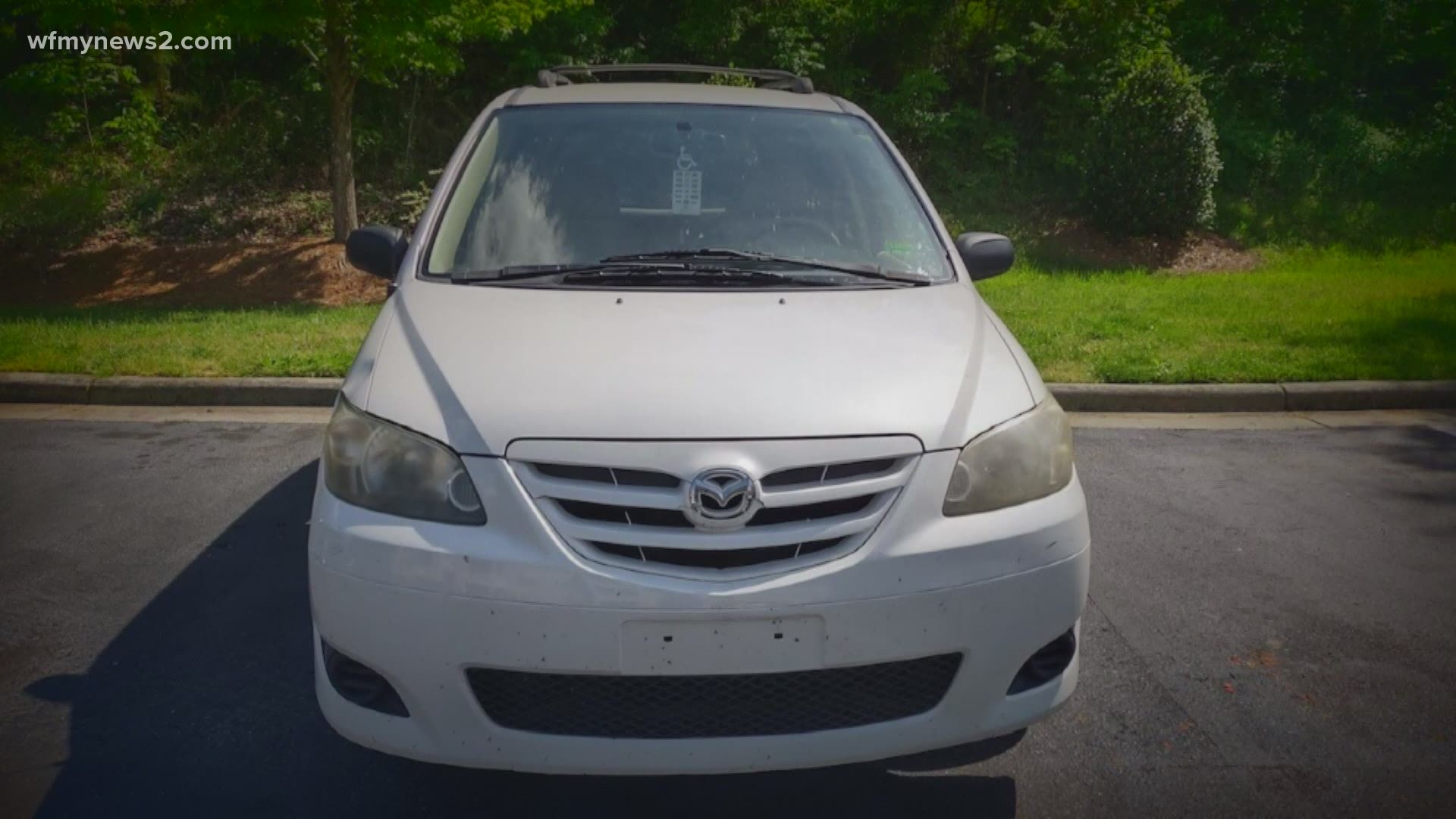 GREENSBORO, N.C. — Eugene Hunt often has trouble sleeping. The veteran will occasionally go outside in the middle of the night to get some fresh air. A few hours later around 8 a.m., he went outside on his porch again but this time something was wrong.

“I opened the door to (check) on the weather and I looked over where I parked my van and it was gone,” Hunt said.

In the span of about four hours someone had stolen his 2003 Mazda Minivan. He had just purchased the van a week earlier and just received the title in the mail.

“I really want it back, I went around looking for it,” Hunt said.

He immediately contacted the police and filed a stolen vehicle report. The chances of finding it seemed small and every day that went by it seemed less and less likely he would ever see it again.

“I figured someone took it out of state,” Hunt said.

After a couple of months, Hunt had given up and eventually purchased a new car. The van was not insured for theft, so Hunt was out $3,500 he paid for the van.

“I didn’t want to buy something new, but I didn’t have much of a choice,” Hunt said.

About three months after the van was stolen Hunt received a notice in the mail from the North Carolina DMV, his van had been found and was at Casey’s Towing in Greensboro. Hunt was thrilled until he discovered the van had been found two days after he reported it missing.

The van ditched at a nearby gas station and was later towed by Casey’s. It had been in the impound lot almost three months. Casey’s notified the DMV within the required 10 days but it took the DMV more than two months to send out the notice.

“I don’t understand how or why it would take so long,” Hunt said.

When he went down to the impound lot he was told the van had racked up more than $3,500 in storage fees.

Not sure what to do a friend contacted News 2 on his behalf. The friend sent an email asking if we could investigate and maybe help.

We contacted the tow company and spoke with the owner about the situation. We explained the van was stolen and immediately reported missing and that Hunt was just recently notified after some three months.

The owner agreed to investigate the matter and see if there was something he could do to help. In the meantime, we reached out to the Department of Transportation and the Governor’s office. We wanted to understand how something like this could happen.

A spokesperson with the DOT told us the agency was to blame and that it is doing what it can to resolve the “ongoing” matter. The Theft and Recovery Division became backlogged with cases and was dealing with staffing issues brought on by COVID-19.

“It’s not the drivers’ fault or anything like that, it’s on us, it’s sort of a perfect storm (that) hit,” DOT spokesperson Steve Abbott said.

The agency was also in the process of moving from one office to another which also added to the delays in notifying owners. The backlog at one point was a bit more than 12 weeks. This means a car could be stolen and recovered but the owner would not be notified for three months.

A spokesperson for the governor sent WFMY this statement about the backlog and the delay Hunt had to deal with:

“This is an unjust result in this situation. The DMV is working to deal with significant job vacancies and a backlog in this area resulting from the pandemic. The governor has directed the DMV to work to fix these issues.”

Abbott summed up the email that was sent to News 2 by the governor, “It means he’s not happy, he wants it fixed and fixed right away and that’s what we are trying to do,” Abbott said.

Since News 2 reached out to the governor and DOT back in March the backlog has gone from almost 12 weeks down to about eight. Agents have been authorized to work overtime in hopes of minimizing the backlog. The agency has also been able to hire a few more employees.

As for Hunt, the tow company agreed to reduce the charges by almost $3,000.

“I’m thankful they did that,” Hunt said. “I also want to thank you for helping me.”

Hunt has his van back and spent a few extra bucks to purchase a steering wheel lock in hopes of preventing this from happening again.

If your car is stolen it’s important to report it but it’s also a good idea to call some of the tow yards and reach out to DMV to see if they have any record of it being found.