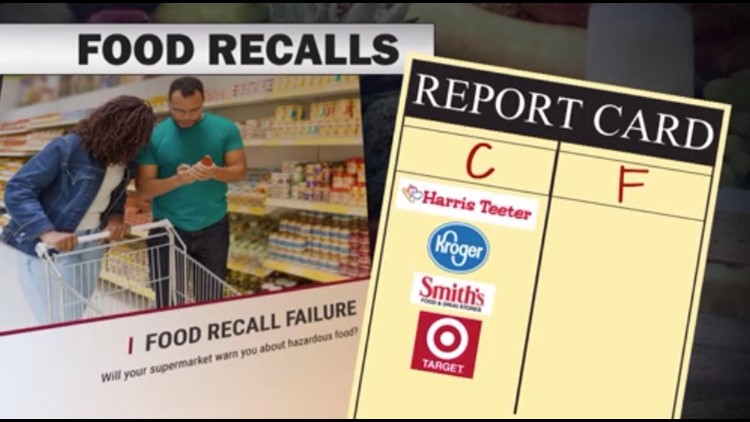 How does your grocery rate at warning you of food recalls?

The CDC estimates 48 million Americans get a foodborne illness every year.

Some cases come from food bought at the supermarket.  Now a new report is urging grocery stores to do more to warn customers about recalled products.

Here’s why in 2018 more than six million pounds of ground beef were recalled over fears it could be contaminated with salmonella. But months later people were still getting sick. They apparently had frozen the meat and later ate it, never knowing about the recall.

"25 percent of people who got sick from the contaminated beef got sick after the recall occurred,” says Adam Garber of Consumer Watchdog U.S. PIRG.

The FDA and USDA post recalls and depends on the media to get the word out, but it doesn't reach everyone.

"Using supermarkets to warn the public about these dangerous foodborne illnesses would help seriously protect public health and make sure people don't end up in the hospital or worse."

U.S. PIRG graded 26 major grocery stores on how the public is alerted of potentially dangerous food that was previously sold. Only four, Harris Teeter, Kroger, Smith's and Target received a passing grade, 22 others failed.

LOOK AT THE GROCERY STORE RATINGS

U.S. PIRG says more stores should use the contact info from their loyalty programs to warn customers by email or phone about recalls. Currently, about 58% of supermarkets do. The group also says stores should prominently display signs.

"They could be at the cash register or the shelving units or on the front door as you enter or exit the door."

In a statement, the National Grocers Association says "over the past decade companies have improved upon the recall response time..." Adding "... In many instances, the product is stopped in the supply chain and never even makes it onto the shelves."

Keep in mind, the grocery stores are not breaking any laws or failing to meet requirements. These are measures and ratings from U.S. PIRG alone.

U.S. PIRG  is also calling on the FDA to enact new rules to make the recall process more effective at warning customers before they get sick.