As restaurant owners and salon shops open, gyms across much of our state sit quiet. 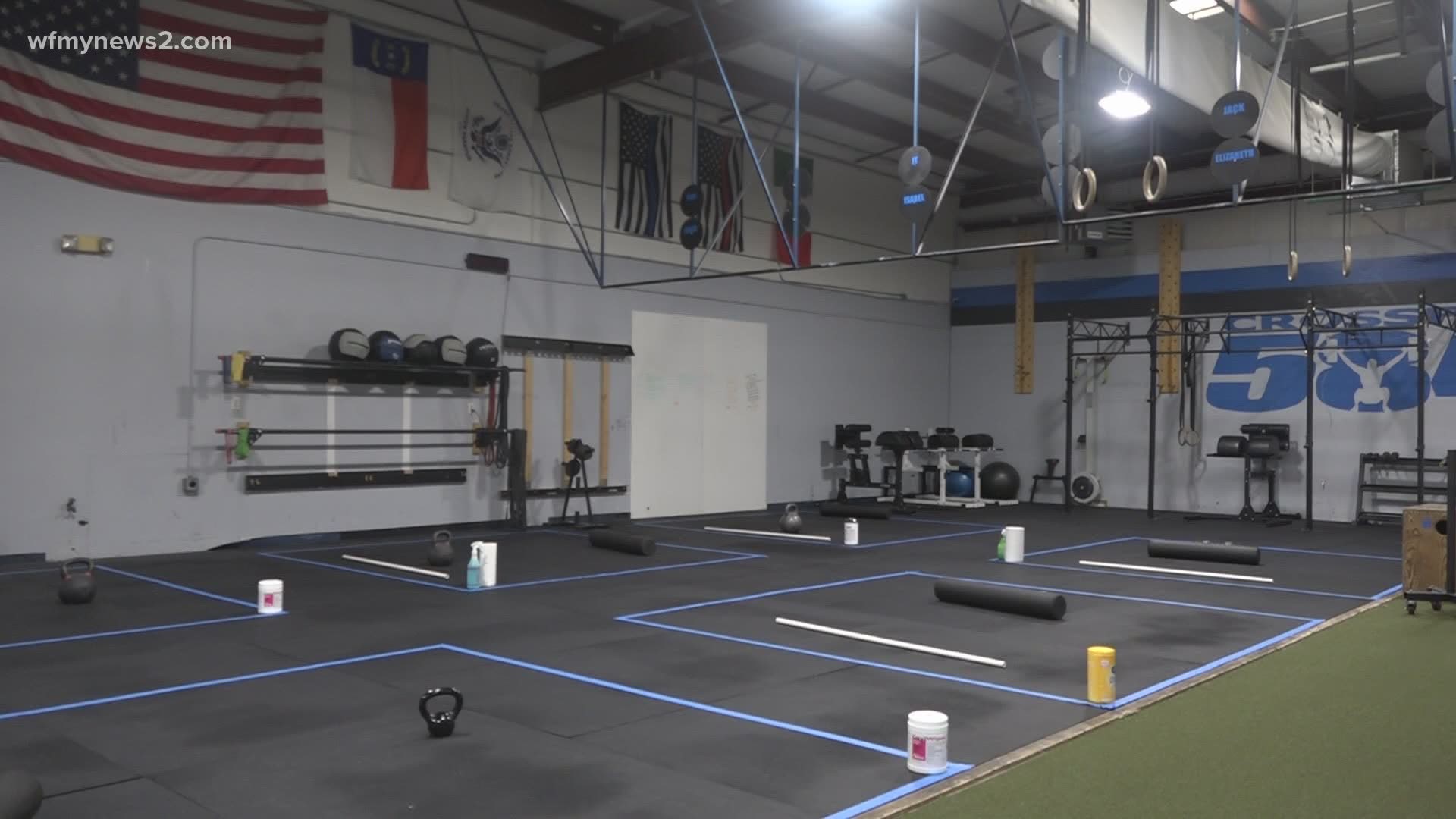 BURLINGTON, N.C. — Scott Barbee spent the past few weeks preparing to reopen his gym. He created specific guidelines and rules for his clients to follow. He also, spent several days sanitizing the facility. He has taped off specific workout areas that are more than 6 feet apart and placed wipes and towels in each client’s zone.

The CrossFit gym is more than 2,800 square feet. Barbee decided he would only allow 10 people in the building at one time.

“We were all ready to go and the governor led gym owners to believe that we would open in phase 2 and then literally as we stood on the edge of that rug, at the edge of the cliff he yanked it out from under us,” Barbee said.

Cross Fit 584 has been in Burlington for more than five years and Barbee said it’s a tight-knit community that relies on his services. The gym, however, is much different than a larger “typical” gym that has lots of workout equipment and people moving about all over.

“We have eight 10-foot by 10-foot spaces blocked off to train in. They don’t leave that area, their bag goes there, the warm-up equipment is there, the workout will happen there,” Barbee said.

With giant garage doors on one side of the building, Barbee feels his gym is set up in such a way that it is actually safer than many restaurants, retail shops, and salons that have been open or can now reopen.

“I have the ability to stay within the parameters set forth in the policies to operate safely that the state has provided and yet I can’t open,” Barbee said. “How does (Gov. Cooper) know what my capabilities are to keep our members safe,” Barbee said.

At Iron Tide CrossFit in Moorehead City, the doors are not only open, they’ve been open for some time. Owner Todd Saunders filed a waiver early on to stay open.

“I filed that request with the Department of Revenue and within the Executive Order that said we could operate while awaiting a response," Saunders said.

The former police officer has also put stringent social distancing guidelines in place. Everyone working out has a 10-foot by 20-foot area and is more than 10-feet apart.

“I do realize the governor is in a heck of a position but I believe I have control over how many (people) come into the building. I have control where they work out and what they touch,” Saunders said.

Earlier the week, Rep. Dennis Riddell stopped by Barbee’s gym. The Republican lawmaker was given a tour and told how Barbee would keep the client’s safe.

“He had some real good safeguards there and I wish Gov. Cooper would take a second look at not just (Barbee’s) operation but gyms in general,” Riddell said.

Friday morning, Riddell sent a letter to the governor asking that he reconsider some of the businesses left out of the phase 2 reopening.

“I would like the governor to look around and realize that maybe we have gone too far and we’re holding on too tightly and to let loose of the reins of power a little bit and let people breathe again,” Riddell said.

WFMY News 2 sent an email to the governor’s office asking for clarification on why a restaurant and salon can open with social distancing guidelines in place, but a CrossFit gym can’t? We received this email:

Thank you for reaching out. Gyms and fitness centers were closed by Executive Order 120, and have remained closed under subsequent executive orders. Under Governor Cooper’s Executive Order 138, effective May 8, 2020, there will no longer be “essential business” designations; this also has not changed with subsequent executive orders. Under the most recent Executive Order, Executive Order 141, gyms must remain closed - see Section 8 (A). While our metrics are relatively stable, our case numbers are increasing, and Safer At Home Phase 2 is a more modest step than originally envisioned. The spread of COVID-19 can be significant in indoor spaces where people share or are touching the same equipment and are close to one another, and especially at gyms where people are breathing harder and typically not wearing face coverings. Additional resources for your quick reference, if needed:

Barbee is not sure what he will do in the upcoming weeks as we move into phase 2. As of now, he will continue to follow the executive order and remained close but hopes the governor will reconsider his situation.

RELATED: Nearly 39 million have filed for unemployment since virus hit