FedEx delivers bed more than three weeks after it was ordered

It seemed pretty simple? Buy a bed in a box and set it up yourself. The bed is perfect, but the company had FedEx deliver it which caused a delay of several weeks. 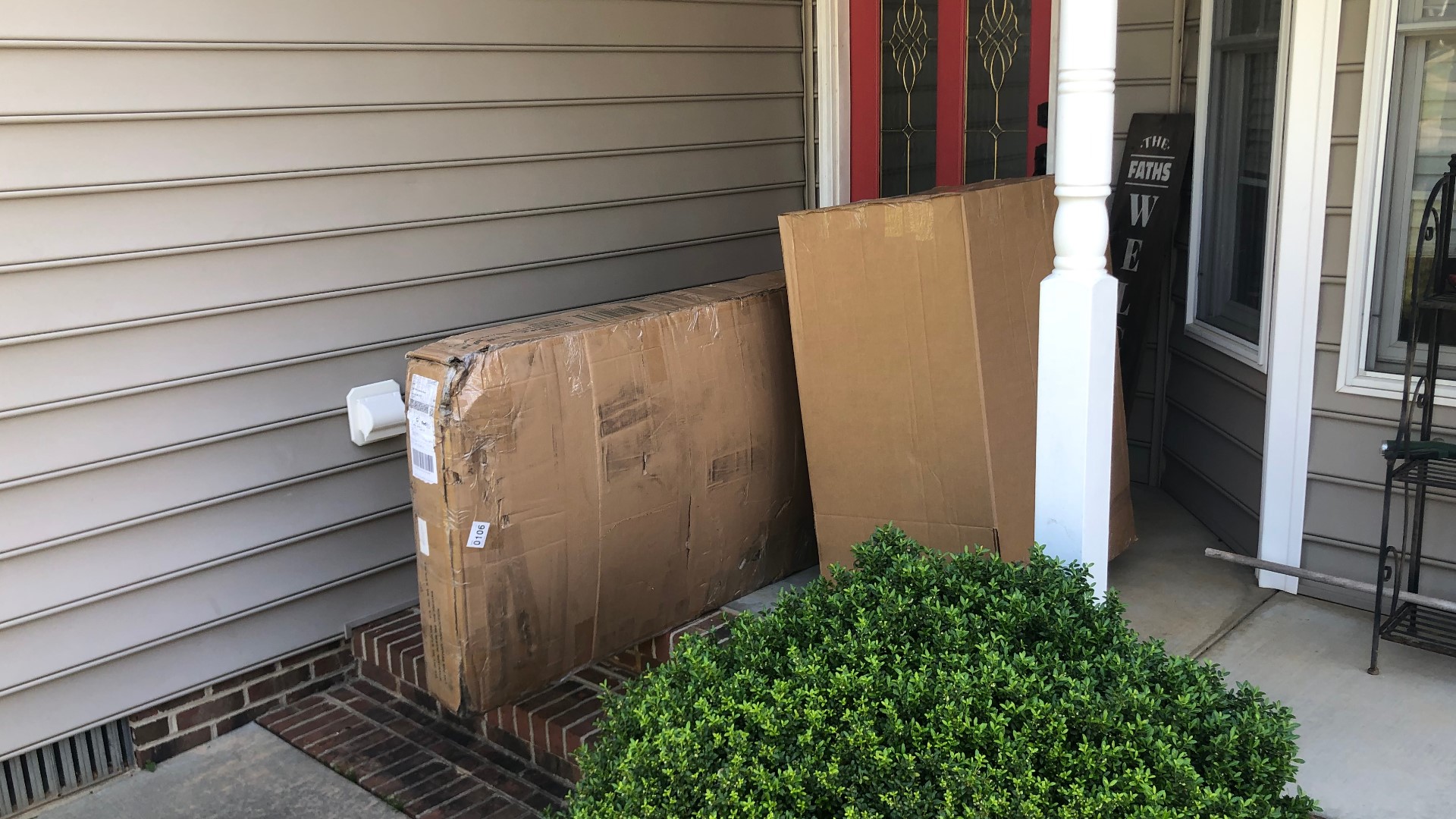 BURLINGTON, N.C. — Katie Fath and her husband needed a new bed. The old one worked but they wanted something bigger and a bit nicer. The couple asked some friends and family for suggestions on the best “bed in a box” and settled on a Zinus, “Everyone else had said, even on the reviews that the bed delivered very quickly, like within a few days, so we were like this is perfect,” said Fath.

The couple ordered the bed on April 24 and received a shipping notification from FedEx a few days later that the bed would arrive on May 1. Fath and her husband were excited to set it up and sleep in the bed that night, “We were so excited to get it,” said Fath.

When Fath checked the status of delivery it showed the bed arrived at the Kernersville station at 12:24 a.m. that day, “We figured since it was in Kernersville an hour away, of course, it’s going to be here by end of day,” said Fath.

The bed didn’t arrive and when Fath went to check the shipping status it had changed to “status pending” instead of a delivery date of May 1. The next day Fath called customer support and was told they would check into it and signed her up for text alerts.

Fath and her husband would take turns calling FedEx almost every other day for the next two weeks, “There was no status updates, no communication on what was going on,” said Fath.

At that point, Fath reached out to WFMY News 2 in hopes we could help. A couple of days earlier we assisted Dale Willoughby who was also missing packages FedEx was scheduled to deliver. Willoughby owns a hobby shop and was missing 13 packages; some were three weeks late.

A spokesperson for FedEx told us they would immediately investigate but could not provide customer details related to the missing packages. At that time FedEx sent us this statement:

"The safety of FedEx Ground team members, vendors and customers is of the utmost importance as we continue to provide essential services to our customers and communities. While we can confirm that some FedEx team members across our enterprise have reported a confirmed COVID-19 diagnosis, we aren’t sharing specific locations or numbers at this time.

While there are no staffing issues at the FedEx Ground hub in Kernersville, we can confirm that we are experiencing a surge of package volume due to e-commerce growth during the current pandemic that has resulted in a temporary service delay for some packages in the Kernersville area. We offer our sincerest apologies for any inconvenience caused by these delays and appreciate our customers’ patience as we implement contingency plans designed to restore service levels. Customers may track their package or contact customer service by visiting www.fedex.com.

With regard to Mr. Willoughby, we are currently in direct contact with the customer and our local operations team is working as swiftly as possible to deliver the remaining packages."

It has been more than a week since Willoughby reached out to us and while nine of those missing packages have been delivered Willoughby tells us four are still missing. The remaining items cost upwards of $1,500 and are no longer available through the distributor, “That’s the frustrating part is I want the items, not the refund the distributor has offered,” said Willoughby.

Since that story aired on WFMY News 2 our station has received multiple emails and calls from other customers waiting on packages from FedEx. It appears all the parcels were coming from the Kernersville Ground Transport Station. One gentleman has been waiting more than two weeks on parts for his electric wheelchair.

As for Fath and the bed that was more than two weeks late, after we again called FedEx to alert them to this issue the next day Fath called us, “Someone from the corporate team at FedEx called (me) and said someone from their media relations team called them and that they would now serve as my point of contact,” said Fath. “I knew that was because of (News 2).”

At that point, Fath was optimistic the bed would be found and arrive soon. Fath said the corporate team member told her more than 48 packages were missing and that “The VP of North Carolina facilities was heading to Kernersville,” to find her packages.

Two days later Fath and her husband were eating breakfast at the house, “The dogs started barking and going crazy,” said Fath. The went outside and found two large boxes that were just dropped off by a FedEx delivery driver. “It was great to get them, but no alerts, no notification, we didn’t get a heads up, you probably thought they would have been like hey we found them, they’re on the way,” said Fath.

In our effort to assist Fath and a few other FedEx customers waiting on packages we sent several questions to a FedEx Media Relations Member to try and better understand why it appears the Kernersville station is behind on deliveries. After sending multiple emails back and forth we received this statement that provides some information:

"We do not share volume numbers by facility but we can tell you that, due to an unprecedented surge in e-commerce shipments driven by the pandemic, the local station is handling average daily package volumes roughly equivalent to those seen during the peak holiday shipping season. The challenge here is that, unlike the peak season, our operations did not have the benefit of months of pre-planning to ensure adequate resources were in place to maintain service levels. The Kernersville station is making significant progress in restoring service levels through the support of additional package handlers and service provider resources deployed from other FedEx Ground stations in the region."

Once we received the email we again contacted FedEx to get better clarification about how many additional drivers, handlers, and how much additional equipment has been brought in. We also wanted to better understand how big this so-called surge in shipments is for packages. The last two emails we received from FedEx are below:

"We can’t offer any information on our package volumes other than what we’ve said already as we are now in our pre-earnings Quiet Period."

"We have no further updates to share with you at this time. We are deploying significant contingency resources to help resolve service delays at the Kernersville station and will continue to work directly with our customers regarding their shipments."

Fath said the most disappointing part of all this is that no one really offered an apology for the delay and the communication that was promised never happened. The good news is the bed is exactly what they wanted.

RELATED: Glitch causes problems with P-EBT: How you'll get your benefits

RELATED: Costco eases restrictions on number of customers that can enter

RELATED: Text-to-give! Here's how you can help families in need during the coronavirus crisis