If age is just a number Lamar is proof life can be pretty good at 90 years old. In fact, his biggest concern right now is actually an insurance policy on his life. 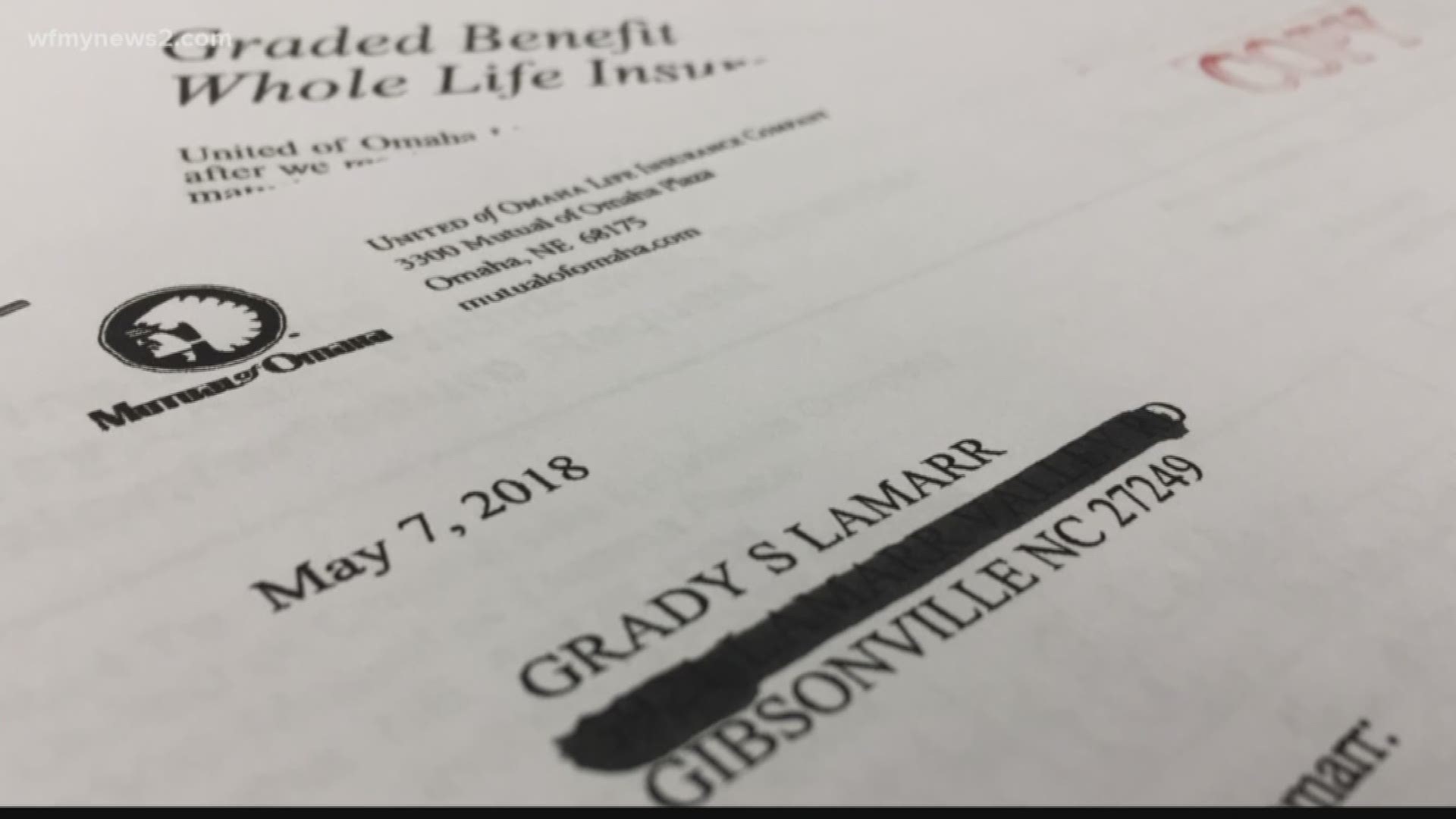 McLEANSVILLE, NC (WFMY) -- Grady Lamar is what you would call an active senior citizen. He not only takes care of the yard and garden on his property but does the same for several of his friends, “I still mow the grass myself and help out others as well,” said Lamar. Not bad for a guy who will turn 91 years old later this year, “I still feel pretty good,” said Lamar.

His daughter Lysa Davis marvels at her dad’s spunk and energy, “He doesn’t like to sit around much,” said Davis. Lamar does have a slower walk this days and is dealing with some hearing loss but other than that he is in good health.

If age is just a number Lamar is proof life can be pretty good at 90 years old. In fact, his biggest concern right now is actually an insurance policy on his life, “They just keep taking and taking the same amount out all the time,” said Lamar.

They are Mutual of Omaha, the company that carries Lamar’s policy. About nine year ago his wife purchased a life insurance policy for Lamar to help pay for funeral and burial expenses. The policy was a Guaranteed Whole Life Policy which included a $10,000 pay out.

That type of policy does not come with a physical or medical checkup so the monthly premium is significantly higher. Lamar was paying $166 a month on the policy. His wife set it up as an “easy pay” so every month the money is taken from the account.

The policy has remained unchanged for the past nine years until his daughter noticed the withdrawals every month and did some checking into it, “In the back of my mind I kept thinking that is a lot of money to keep paying,” said Davis.

2 Wants to Know (2WTK) reached out the North Carolina Insurance Commission to see learn more about these types of policies. Turns out they are not only common they are popular with elderly people, “The advantage with a guaranteed life insurance policy is they are available to anybody,” said Commissioner Mike Causey.

The policy does however come with a risk. In Lamar’s case had he passed away in the first two years of the policy the money he paid in, plus interest would have been refunded but no payout given. Had he passed away after year two and before year five he would have received the $10,000 payout and paid less than $10,000. The risk is every year after that, where the money being paid is now more than the $10,000 policy. In Lamar’s case he was charged $166 a month so after five years he paid $9,960.

The policy runs for 20 years or until the person passes away. So, every year after that fifth year Lamar is paying Mutual of Omaha more than he will get back when he dies.

Mutual of Omaha would not discuss the case with us citing privacy concerns so we contacted an insurance agent with another company to learn more about these types of policies and what elderly people can do.

Christopher Cook is President of Alliance Insurance Services in Greensboro. According to him life insurance policies when purchased late in life will often come with a sizeable premium but there are some things you can do and ask an agent before signing up.

If you are in good health you could purchase a fully underwritten policy. This type of policy comes with a medical checkup and some lab work that is paid by the insurance company but if you are healthy could significantly lower that premium.

There is also a Guaranteed Universal Life Policy which comes with lower premiums but does not give you the option of a reduced payout policy or a cash payout. Cook says it’s important to ask questions before signing up for a life insurance policy. Some companies will provide a one year “contest” window versus the two years where if you pass away you simply get your money with interest paid back to you. You should also ask how long will you pay premiums and when the policy endows or ends so you are not stuck paying for 20 years if you live that long.

As for Lamar he and his daughter are not sure what they are going to do… aside from enjoy the time they have together while Lamar is still living.