GREENSBORO, NC -- Many of us have had days where we were feeling a little sick and had to think twice about going to the doctor. You wait to make sure it's serious because frankly, doctor visits aren't cheap. 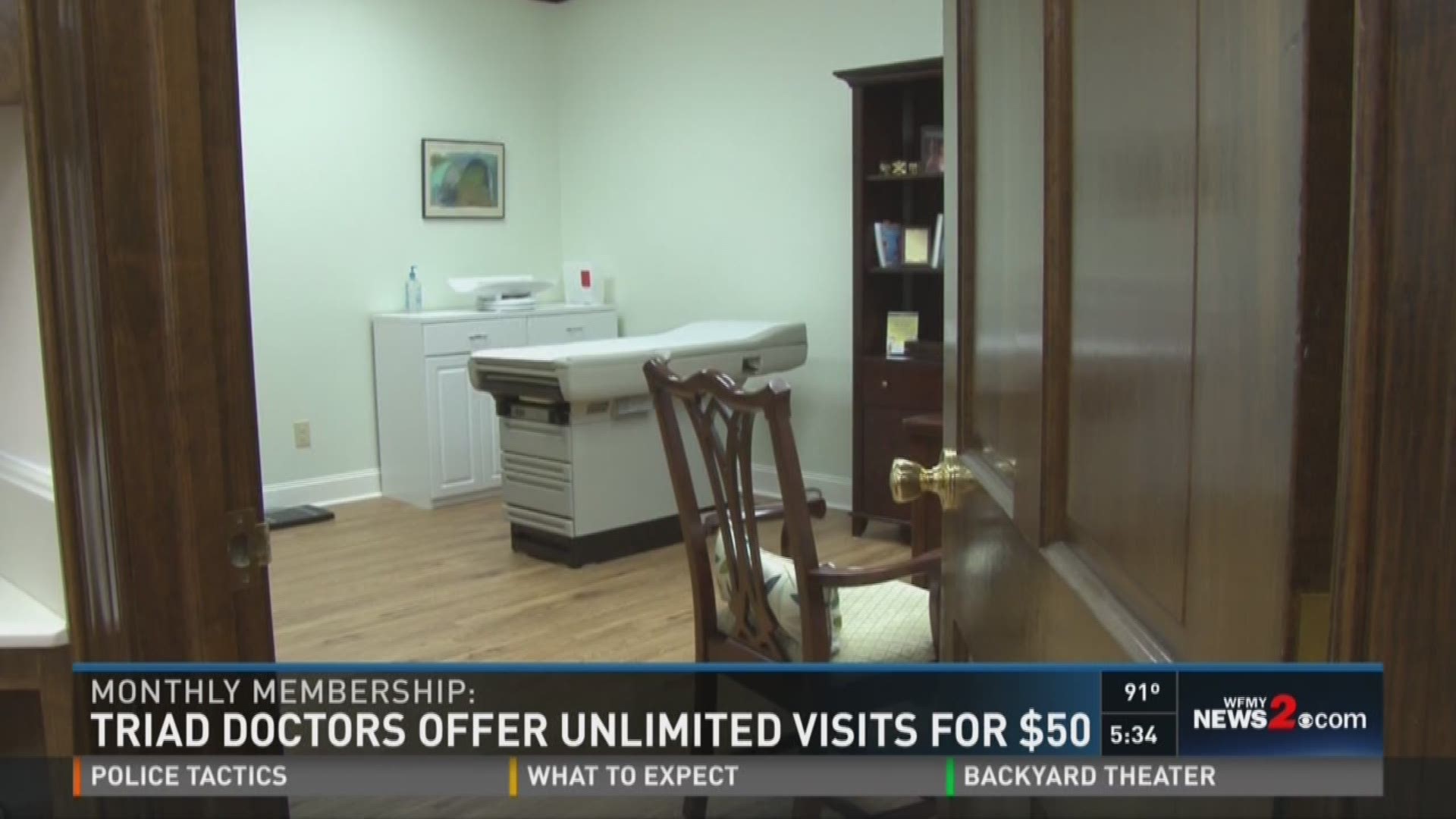 GREENSBORO, NC -- Many of us have had days where we were feeling a little sick and had to think twice about going to the doctor. You wait to make sure it's serious because frankly, doctor visits aren't cheap.

The average family of four paid more than $25,000 in health care cost last year, according to The Milliman Medical Index (MMI).

But a growing number of family doctors say they have found a way to make routine doctor visits cheap and give you better care.
In some cases, you pay as low as $25 a month and still see a doctor whenever you want with no extra costs.

The idea is called Direct Primary Care (DPC).
Think of it like a gym membership.
You pay a monthly fee and you get to go as often as you want.
It's the same idea.
In this case you get unlimited visits to your family doctor.
Access to that doctor by phone or a secure messaging system -- 24/7.
You get same day or next-day appointments.
Discounts on things like labs and your prescription medicine.
All for a monthly fee of anywhere between $25 and $85 a month.
That's it.
No extra costs. No co-pays. No insurance involved.

If you're thinking this sounds too good to be true, even the Triad doctor who's offering it agrees.

“It does sound too good to be true. And I think that that's the hardest thing about selling people on this model. Because they just don't understand how it could be that easy,” Dr. James Breen said.

Dr. Breen and his wife, Dr. Dayarmys Piloto de la Paz, who is also a doctor, opened their direct primary care practice just over a month ago in Greensboro.

It is called Vitral Family Medicine.

It is the only clinic of its kind we know of in the Triad.

But according to the Journal of Medical Economics, there are more than 300 doctors’ offices across the country using the same model.

“A lot of people describe direct primary care as do it yourself health care reform,” Dr. Breen said.
He explains that in this model, your doctor visits are longer, patients get better care and there is no red tape from insurance companies about what he can and can’t do.

Jay Easley, who heard about the model while helping the doctor secure a loan for his practice, has tried it.

“It has just been a good experience. I've been to the office of three or four times [in a month]. One, because I was sick and the others because of regular checkups,” Easley said. “In the past I might be reluctant to go to the doctor if I were sick only because again I am paying out of my health savings account […] now I'm more likely to go because there's no office charge.”

Dr. Breen and advocated of Direct Primary Care are quick to say the model does not replace traditional health insurance.

In fact, because of the federal requirement that everyone sign up for health insurance, DPC patient would still need to get one.

Breen says what people have done is tweak their health insurance to a high deductible and low cost plan to only cover serious and emergency medical issues that your family doctor doesn't usually see you for.

“Health insurance is important. Part of the direct primary care mantra is insurance will be restored back to the rule of insurance, which is to pay for things that are really expensive, unforeseen or catastrophic,” Dr. Breen explained.

“I think it's a great model but don't just buy it without actually seeing out how it all works. Healthcare is very complicated. This isn't just like buying a car. You actually have to learn how to put together a really complex piece of machinery,” he said.

Keep in mind, in some direct primary care practices, things like labs and X-rays aren’t covered because they have to be sent out.

Also, visits to specialists aren’t covered because those are things you usually have to go to someone else for -- not your family doctor.