The Greensboro City Employee Behind The 'Boeheim Burn Tweet'

Jake Keys says he didn't think too long about his response. He just wanted to stick up for Greensboro. 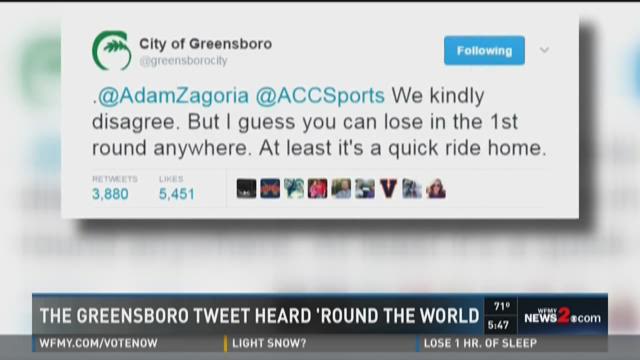 GREENSBORO, NC -- WHOA! A City of Greensboro tweet on ESPN's Sportscenter. The man who wrote the tweet heard around the world was surprised too.

"I mean we are watching sports sort of this morning and Scott Van Pelt and Mike and Mike are talking about it and you know they were like, "Oh, it's a big burn!", that was awesome," says Jake Keys, the writer of the now famous tweet.

"It's fantastic Greensboro's first name is getting out in a positive light all over the country with millions of people."

Keys' tweet was in response to Syracuse coach Jim Boeheim saying the tournament had no value in playing in Greensboro. The city, and really Jake Keys, responded "We kindly disagree. But I guess you can lose in the 1st round anywhere. At least it's a quick ride home."

.@AdamZagoria @ACCSports We kindly disagree. But I guess you can lose in the 1st round anywhere. At least it's a quick ride home.

The tweet has been retweeted more than 6,000 times and liked more than 9,000 times. Jake says it's been fun to see his words---his kind smack talk-- take off. "And I think one of the things that resonated with you know people from here is just to stick up for ourselves but you can't call us out like that and we're just going to ignore it like one that's it a stick up for us."

*I really love the Bart Simpson one. So I think that's the only one that I retweeted. It was of him in like a leisure suit. Strutting down the street and it said you know whoever runs it can walk to Greensboro like that.

*So one of my favorites is from Darren Rovell from ESPN and has just said the person behind the city Greensboro is Twitter handle needs to get an immediate raise. That's pretty awesome!

Jake says he didn't really hesitate. He wrote the tweet in a few seconds and tweaked a word or two and then just hit the send button!

The person behind the City of Greensboro Twitter handle needs to get an immediate raise pic.twitter.com/hLNVi65Q9k