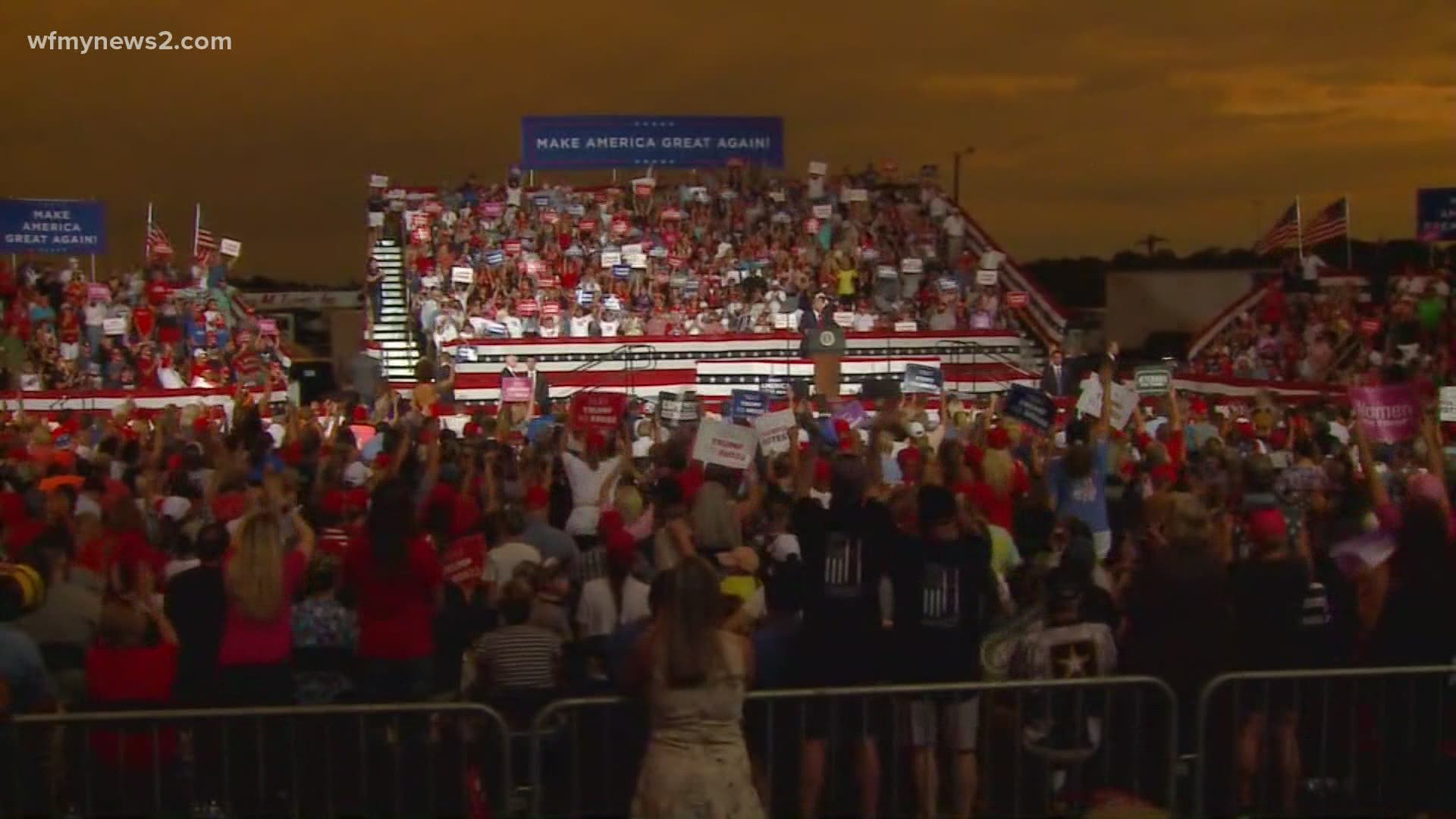 WINSTON-SALEM, N.C. — A local medical expert has a simple message for people who attended President Trump's Rally in Winston-Salem Tuesday. Dr. Christopher Ohl, a leading infectious disease expert at Wake Forest Baptist Health, said supporters who went to the event need to self-quarantine, monitor their health for COVID-19 symptoms, and get tested five days after attending the rally.

"It turns out that event does have some potential for it to be a superspreader," Dr. Christopher Ohl said.

Make sure to note he said "potential" in that quote. 2 Wants To Know explains why.

Start with some quick facts about President Trump's campaign stop:
The event was anywhere from 7,000 to 9,0000 people. They were outside on Smith Reynolds Airport's runway Tuesday. And State officials said the event was legal under Governor Roy Cooper's Phase 2.5 order, which limited outdoor gatherings to 50 people. That's because it was a political event and was protected by the First Amendment according to Cooper's spokesperson Dory MacMillan.

Like the protests we've seen in streets all across the country, not everyone wore a mask, and not everyone social distanced. Some researchers have said the marches have had "no significant divergence in the {COVID-19} trends." That means those researchers found no proof the protests were super spreaders, so what's different about the President's rally? It's the location.

Both protest marches and the President's rally were outside, but Doctor Ohl points out at the Trump event:

"Parking was not anywhere near where the event occurred and you had to get in a bus to go to the venue and the bus rider them in 20 to 30 minutes with unmasked people," he said.

Here's why doctors say being outside is safer: as the person next to you is talking and spiting out water droplets that could carry coronavirus, the wind can wipe them away from you. But if you're inside a bus, those droplets get trapped and keep building up right in your face. That's unless the person next to you has a mask on. Then almost all those droplets never even go into the air.

So did people on the buses wear masks? We scanned all the videos our crews took at the Trump campaign event and found a clip of one bus. Again this is just one bus captured out of a whole fleet, but 21 out of 25 people coming off the bus were wearing a mask.

RELATED: ‘Your state should be open,’ President Trump says while hosting campaign rally in Winston-Salem

Organizers also said they made provisions for safety protocols for the rally.

"Masks, hand sanitizer, and temperature checks are provided to every attendee at the event," a statement from 'Trump Victory' said.

The state chairman of the Trump Presidential Campaign, Rockingham County Sheriff Sam Page said he was unable to attend the event due to a conflict of schedule.

Sheriff Page said while he wasn't yet privy to Dr. Ohl's full commentary on the presidential rally, the issue of following recommendations and guidelines and or attending political or public events was is a matter of personal choice.

"There are going to be a lot of opinions from both sides but it goes back to this, this is America, this is a free country and there is an issue about choice, try to be informed when you can," Sheriff Sam Page said.

RELATED: "That wasn't our intention, but we did it!" | President Trump retweets photo of Rockingham County man's yard

"I would probably add on to that if you feel like you have flu-like symptoms contact your local physician. I think it's an individual choice to attend a presidential rally for the president who is a person you support," he added.

The North Carolina Democratic Party sent in this statement;

"This rally was a dangerous event that violated the guidance of the President's own health advisors and Governor Cooper's order limiting public gatherings. Instead of trying to help our state combat the pandemic, Donald Trump is making it easier for the virus to spread and putting the lives of North Carolinians at risk – all to satisfy his own ego. In the last 24 hours, we've learned the President knew how deadly this virus was as early as February; by holding these large-scale events he's continuing to actively jeopardize public health," wrote Austin Cook, Communications Director, North Carolina Democratic Party.

Dr. Ohl said keeping track of how many cases actually occur from one single event after people spread out can be difficult so it is up to attendees to remain vigilant.

"Kind of put yourself into a self-quarantine situation, either that or you could also get tested and if you're going to get tested after an event like that you would want to wait for five days afterward and get tested," Ohl said. 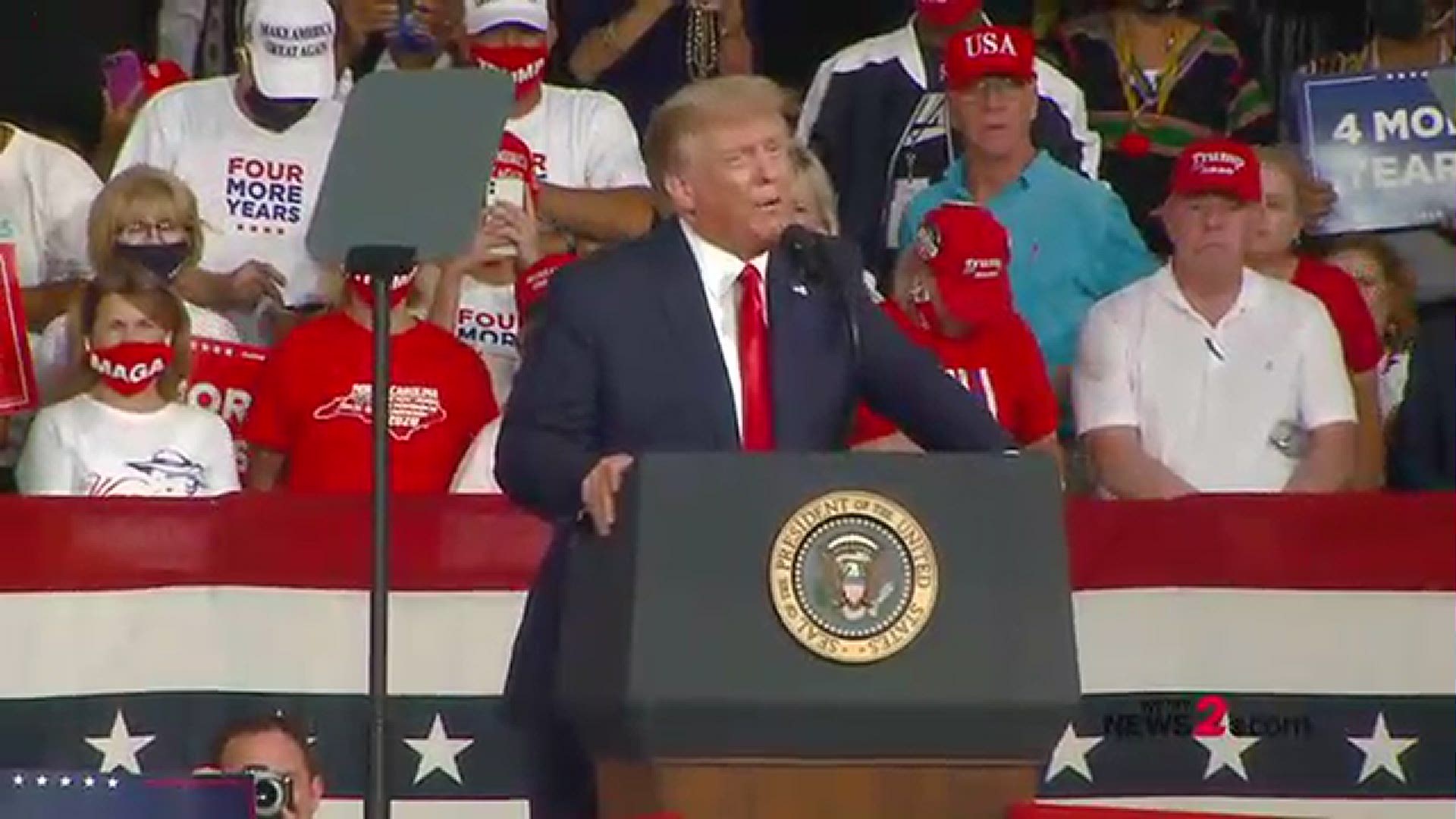