Brandy Crawford said she tried to call for more than a month to get someone to help her. Frustrated and running out of money, she decided to drive 70 miles for help. 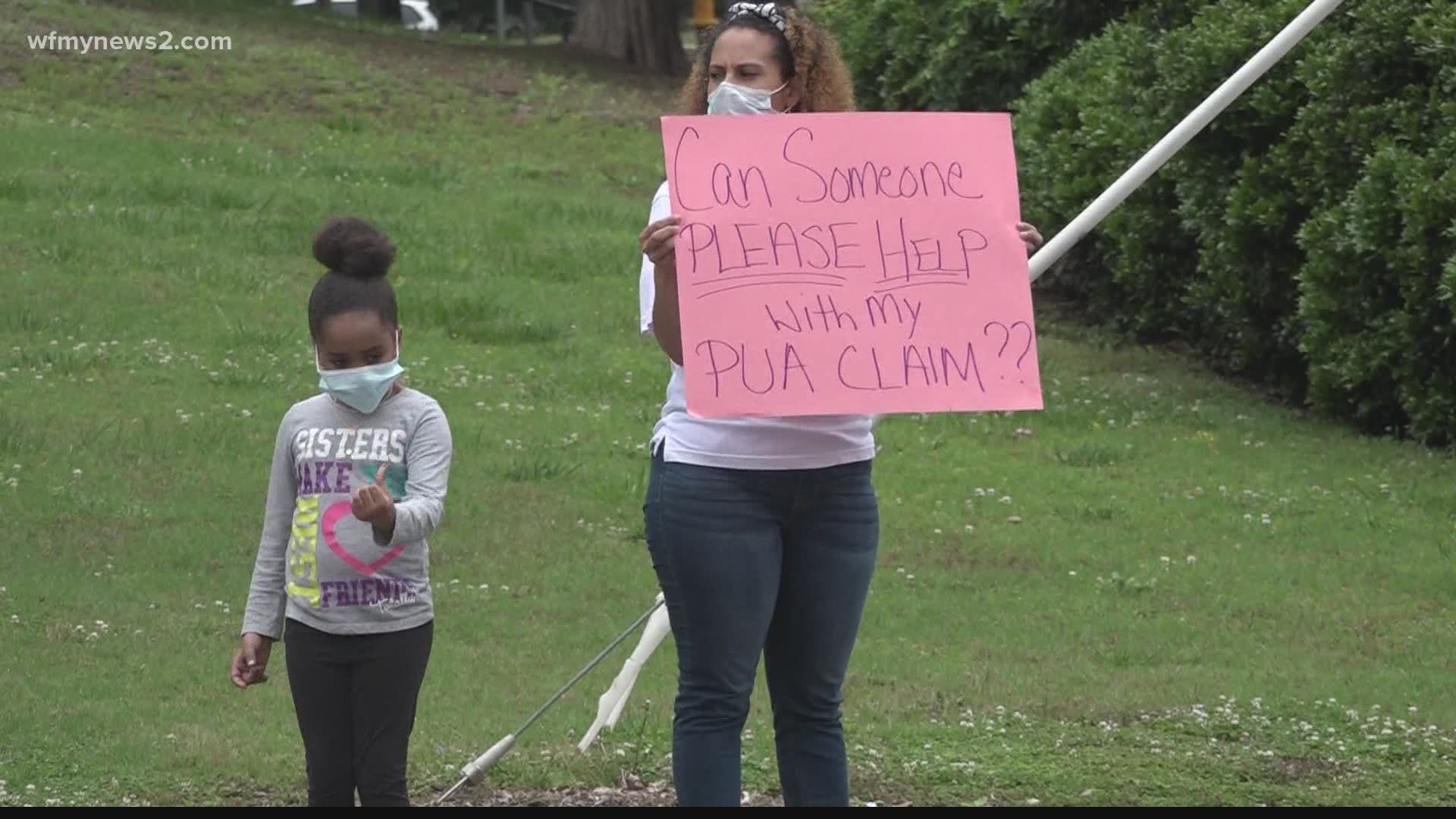 GREENSBORO, N.C. — It was a Wednesday morning last week when Brandy Crawford struggled to get out of bed. Sometimes, it’s just easier not to do anything than face the reality of life right now. So, instead of getting up and trying to fix her situation, she rolled over and went back to sleep.

Crawford is not lazy or unmotivated, but she is frustrated and confused. She is dealing with the same issues as millions of other Americans. The single mother is out of work and money is running out.

“My anxiety is constantly higher, depression is starting to set in,” said Crawford.

A few months ago, things were looking pretty good for Crawford. She was in the training program for a new job and had just about finished when her daughter started to get sick.

“All this was right at the beginning of the pandemic and there wasn’t a lot of testing, so we were told to quarantine and monitor her,” said Crawford.

Unfortunately, Crawford was let go from the job because she missed too much time. At about that same time, she learned her daughter’s school was also going to shut down for the semester.

“So, now I have to stay home and school her,” said Crawford.

Her daughter Willow is six years old. Crawford did not feel comfortable having Willow home by herself and did not have the money to pay for a sitter.

Crawford would try to file for Pandemic Unemployment Assistance in hopes of collecting some money while she stayed home to school her daughter. The program will pay people up to $900 a week if they qualify. When Crawford tried to apply, a previous claim that listed as “pending” prevented her from submitting the new claim online.

“I just kept trying to call the number that you’re supposed to call to get through for almost a month,” said Crawford.

“Makes you feel like you have a better chance of winning the lottery.”

As for that day, Crawford struggled to get out of bed, but she did, and then she acted. Not sure exactly what to do, she found some crate paper and made a sign asking for help. Crawford and her daughter then jumped in the car and drove to Raleigh.

“I just decided it can’t hurt to go to Raleigh and hold up a sign outside and ask for help,” said Crawford.

With 6-year-old Willow next to her, Crawford stood outside the Division of Employment Security holding a sign asking for help.

“It’s just not rent, I’m getting ready to lose my car,” said Crawford.

So, as car after car drove by the busy intersection in front of the building, Crawford stood waving her sign. One hour would become two and then three. Crawford was determined to get someone from the Division of Employment Security to listen.

“I was desperate and needed help,” said Crawford.

There was no guarantee the sign would work...but it did! Crawford was thrilled when a worker with the DES stopped and talked with her. He provided an email to Crawford and told her he would “personally” look into her situation.

“I was glad he took the time to stop and help me,” said Crawford.

The next day, Crawford emailed the man from the DES, who according to Crawford, told her a couple of people were looking into her issue. The problem seemed to hinge on a previous unemployment filing that was listed as “pending” in the system.

It only took a few days before Crawford received an email back from the DES letting her know her claim was denied.

“I just got an email alerting me it was denied,” she said. Crawford said the man who helped her told her she would need to file an appeal.

We reached out to the DES in hopes of better understanding why Crawford was denied but was told it could not disclose information related to individual claims. We were then directed to the https://www.ncdhhs.gov/ for additional information and resources.

Crawford said despite the results, the drive down to the DES office was worth it. She also said the system needs to be streamlined to help everyone looking for assistance. Crawford will be appealing the claim and has started to look for a job.

RELATED: How to find a job during a pandemic, according to a career expert

RELATED: VERIFY: Can you take money out of your 401K during the pandemic without penalty?